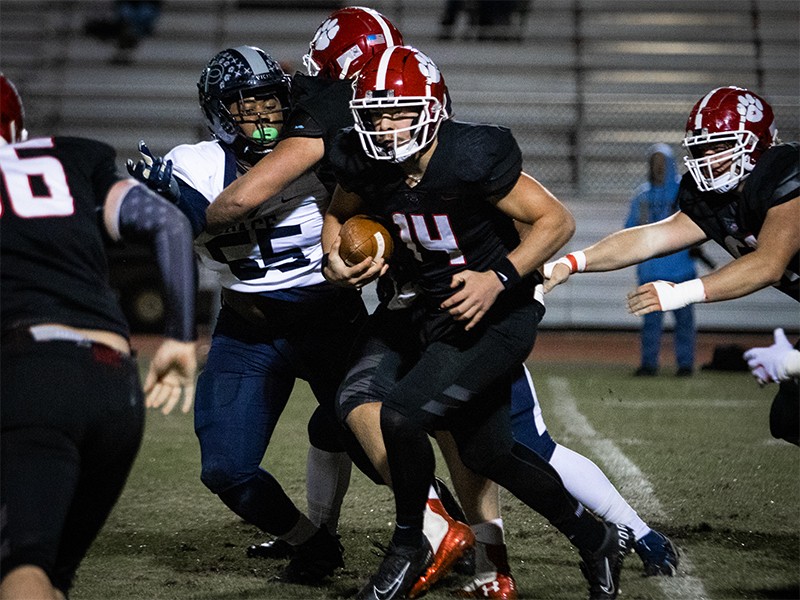 Rabun County's Gunner Stockton accounted for 456 yards, both passing and rushing, to lead the Wildcats to a 63-14 win over Pace Academy on Friday.
Photo/Ethan Nix
Contact Editor

TIGER, Ga. — Not only did Rabun County's game stats computer crash, so did Pace Academy.

The top-ranked Wildcats (10-1, Region 8-2A No. 2 seed) racked up 621 yards of offense to blow past Pace Academy, for the second time this season, 63-14, at Wildcat Stadium in the first round of the Class 2A playoffs on Friday.

Georgia-commit and senior quarterback Gunner Stockton accounted for 456 yards, both passing and rushing, to lead the Wildcats' attack. He was near-perfect passing, completing 18-of-21 passes for 302 yards and five touchdowns. He added another 154 yards on 12 carries and two scores.

Jaden Gibson caught five passes for 81 yards a touchdown, while Lang Windham led the Wildcats receiving with five catches for 98 yards and a touchdown. Windham also rushed for 68 yards on eight totes and a score.

Rabun County will play host to Jeff Davis next Friday.