Game of the Week: Future SEC quarterbacks headline five-star clash in the mountains 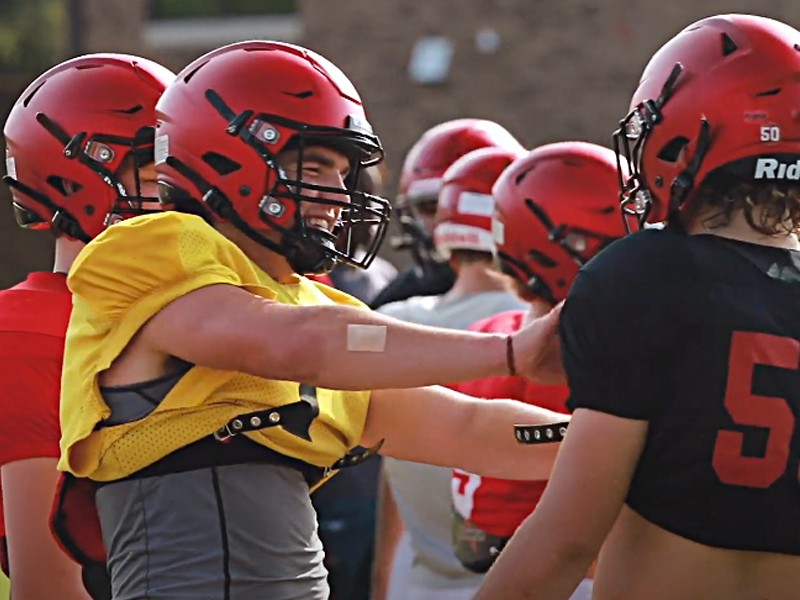 South Carolina-commit Gunner Stockton is set to lead the Wildcats on Friday in ESPNU's nationally televised game of the week against Prince Avenue Christian.
Contact Editor

TIGER – When ESPN calls, it’s probably a pretty big game. When two future Southeastern Conference quarterbacks are playing against each other, that's why ESPN is calling.

Rabun County quarterback Gunner Stockton, who committed to South Carolina over Georgia almost a month ago, and Prince Avenue Christian quarterback Brock Vandagriff, who picked Georgia earlier this year, will meet for the first time as opponents on Friday.

“I think it will be like a heavy-weight boxing match where both young men are making plays all over the field with their feet and their arms,” Prince Avenue coach Greg Vandagriff said.

Class 2A No. 1-ranked Rabun County and Prince Avenue Christian, ranked No. 3 in Class A-Private is the most anticipated contest in the mountains since the 2017 Class 2A state title game and will kickoff at 8 p.m. on ESPNU Friday at Frank Snyder Stadium in Tiger.

“It’s going to be very special to see those two compete and lead their football teams,” he said. “I’ve got a ton of respect for Coach Vandagriff and Brock and what they do over there. It’s going to be a challenge for us, but it’ll be a great night of high school football.”

Last week, the Wildcats’ sophomore running back Lang Windham had a career-night with 148 yards rushing and a score, while Stockton passed for 153 yards and three touchdowns and rushed for 98 yards and a touchdown in a 35-0 win over Class 5A Ridgeland.  The defense also held Ridgeland to under 200 yards of total offense.

"It was really good to see, especially seeing some of our young guys that hadn't played step up and make some plays and play our brand of football," Shaw said about last week's win.

"Lang is a young guy that hasn't really played a lot. He coughed the ball up on the first drive then turned it around. He caught the ball out of the backfield and finished runs. I was really proud of him and how far he has come. He's got a bright future."

Brock guided the Wolverines to a 42-7 rout of Calvary Day last week scoring all six touchdowns – four through the air and two on the ground -- while passing for 246 yards and rushing for 98 and two scores. Senior running back Landon Owens chipped in another 90 yards on the ground and caught five passes for 75 yards, adding to the 440 total yards of offense.

ESPNU NATIONAL GAME OF THE WEEK

It’s not often two schools from the two smallest classifications -- Class A-Private and Class 2A -- in the state grabs national attention. When it happens, it’s pretty special to both sides and big-time for the communities and its fans.

Stockton was all smiles about the opportunity to showcase Rabun County on national television.

“It’s kind of like any other game, but it’s pretty cool to be on ESPN,” he said. “It’s just pretty awesome for our community, but just getting that chance to be on national television is pretty special.”

“It’s awesome for Rabun County,” Shaw said. “The exposure that it brings … you can’t put a measure on that type of exposure and what it does for our community. The guys will remember this for the rest of their lives. We’ve put ourselves in a position that we get to go on a national stage and see what we can do.”

Coach Vandagriff also believes the national attention is good for both programs.

“I think it is great for small schools and small program schools,” Greg Vandagriff said. “It is awesome for both of our communities, and I think it is a win-win regardless of the score.”

WILL THE STREAK BE BROKEN?

The Wildcats have been nearly unbeatable at home, winning 24-straight regular-season games and an impressive 28-3 record, including playoffs, since 2015. But the Wolverines are pretty dang good on the road since 2015, posting a 23-5 record.

KEYS TO A WIN

Both teams will look to limit the two five-star quarterbacks, but it won’t be an easy task. The Wildcats held a bigger Ridgeland team to just 89 yards on the ground and 102 in the air, while Prince Avenue stifled Calvary Day's offense to just seven points. But this game will be a different beast for both teams and has all the makings to be a classic.

“We need to, hopefully, limit their offensive success,” Coach Vandagriff said. “We know that they are explosive and a very good program. We just hope to go up there and do our best and let the chips fall where they may.”

Shaw says playing the Rabun County brand of football will be crucial on Friday.

“We’ve got a very mature football team -- a team that just goes about their business, and that’s the way we’re going to handle it,” Shaw said. “In a game like this, there are going to be so many emotions, so we’ve got to find a way to take care of the football. We need limit and create explosive plays and just play our brand of relentless effort football -- playing with our hair on fire.”

PRINCE AVENUE CHRISTIAN at RABUN COUNTY
-- WHEN: 7:30 p.m.
-- TICKETS: $7 at the gate; 50 percent capacity
-- WHERE: Frank Snyder Stadium, Tiger
-- PRINCE AVENUE CHRISTIAN (1-0, 0-0 Region 8-A Private): Ranked No. 3 in Class a Private; defeated Calvary Day 42-7 last week
-- RABUN COUNTY (1-0, 0-0 Region 8-2A): Ranked No. 1 in Class 2A; defeated Class 4A Ridgeland 35-0 last week
-- COVID PROTOCOLS: Masks are not required; temps will not be taken. Concessions will be available.
-- NOTABLE: First-ever meeting between the two programs. ... Well before the season was set to begin, this game was penciled in on many calendars as one of the season’s premier matchups in the state. It features Prince Avenue Sr. QB and Georgia-commit Brock Vandagriff (the No. 1 Sr. dual-threat QB in the nation) vs. Rabun County Jr. QB and South Carolina-commit Gunner Stockton (the No. 1 Jr. dual-threat QB in the nation) and just to give it even more clout, it will be the featured ESPN matchup nationwide Friday night. Vandagriff threw for 2,471 yards and 31 TDs (3 INTs) while Stockton led Class 2A with 3,473 yards and 43 TDs (6 INTs) in 2019. ... And while those two gunslingers will garner the bulk of the attention, the two teams are loaded and balanced across the board. The Wildcats defense may have been the biggest story in last week’s opener, holding a bigger Ridgeland team to just 89 yards rushing and just 191 total yards. ... Rabun County So. RB Lang Windham had a breakout game with 148 yards rushing with a TD. He also caught 3 passes for 39 yards. ... Something will have to give here, and big. The Wildcats have been nearly unbeatable at home. They have won 24 straight regular-season games at home going back to a loss to Jefferson to open the 2015 season. They are a whopping 28-3 at home, including playoffs, since that Jefferson loss, the other two coming in the playoffs. ... The Wolverines, however, have been one of the more impressive road teams in the area since 2015. They are 23-5 on the road in that span with all five losses coming to either Athens Academy (3) or ELCA (2) and four of those in the playoffs. They are 23-0 on the road against everyone else since 2015.