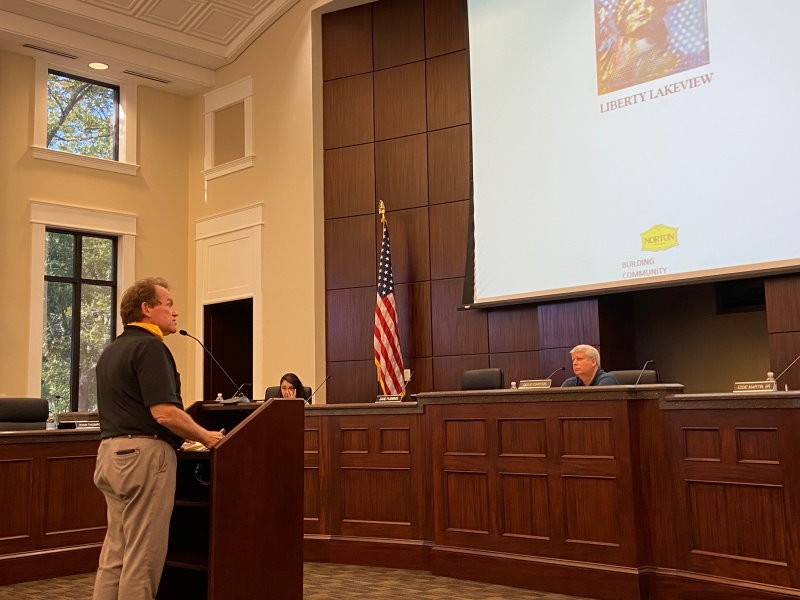 A more-than 16-acre proposed housing development off of Lakeview Drive and Quarry Street in Gainesville was recommended for approval by the city planning and appeals board Tuesday.

The project, if approved by the Gainesville City Council, would feature more than 40 housing units on the site across from Gainesville Middle School. The developer, Frank Norton, Jr., said his firm is looking to improve the home quality of the area.

"Our investors became interested in improving the character and the appearance of the homes along Quarry Street," Norton said. "To that end, we have purchased five properties adjacent to our 14 acres."

The latest proposal would see those five properties annexed into the city and incorporated into the development. Quarry Street resident Odis Sisk spoke against the request, saying he felt the development would break up an existing community in the area.

"This is an East Hall school district. My children go to East Hall schools. Those are now going to be Gainesville schools, so it's separating our community into multiple little factions," Sisk said. "It's becoming, you're either us or you're over there with those other groups of people. We as county residents get no benefit."

Sisk also raised concerns about added traffic on Quarry Street and the look of the proposed townhomes. Norton said he felt the development could enhance the sense of community in the area.

"(Our firm) still owns 28 historic homes that are over 100 years old throughout Northeast Georgia and we aren't scared of them and we recognized the inherent value to the fabric of a community and that's what we're trying to do here," Norton said. "We're trying to build a community to serve Northeast Georgia Medical Center, sandwiched between the hospital and Kroger and major developments to serve the needs of all our communities."

The planning and appeals board approved the request unanimously. Board member Jane Fleming recused herself from the hearing.