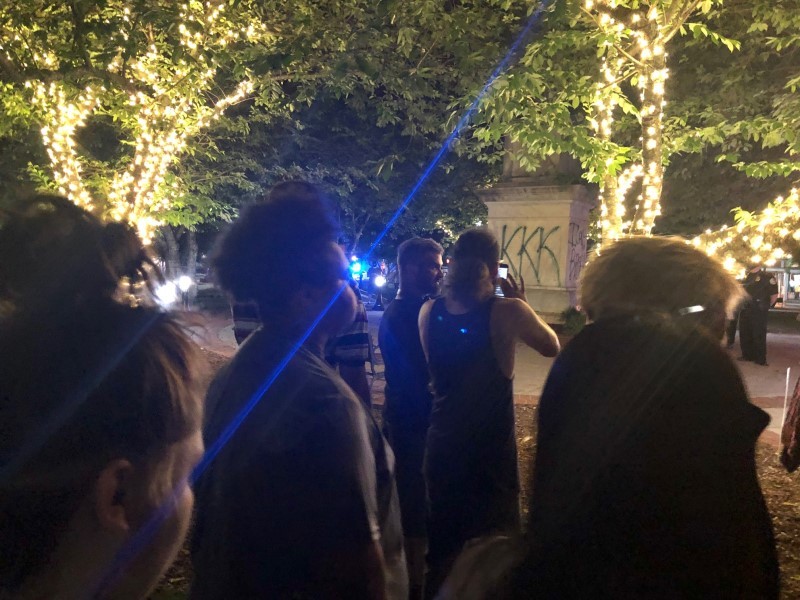 The names of eight people arrested by the Hall County Sheriff's Office following protests in Downtown Gainesville over the weekend have been made public. The Gainesville Police Department made two arrests, but those names have not yet been released.

Officials with the sheriff's office released a list of those who had been booked into the Hall County Jail Saturday and Sunday as a result of the demonstrations.

Possibly the most notiable arrest was that of Tyler Dalton Moye, 24, of Gainesville, who is believed responsible for the vandalism of the Old Joe monument located in the center of the downtown square. As of Monday afternoon, Moye remained in jail on $14,350 bond.

According to the sheriff's office, Moye vandalized the statue around 9:40 p.m. Sunday, spray painting the words "KKK" and "I can't breathe" on three sides. He then attempted to flee from deputies on foot as they tried to arrest him. He was apprehended a short time later.

The statue has since been cleaned up.

On Saturday night into Sunday morning, seven people were arrested in the area of Jesse Jewell Parkway and Main Street in downtown Gainesville:

According to the Hall County Sheriff's Office Police to Citizen website, which allows citizens to access reports, inmate lists and some other records, none of those arrested Saturday into Sunday remain in the county jail.