Mount Vernon Mills in Alto shutting down March 9, but touched many lives 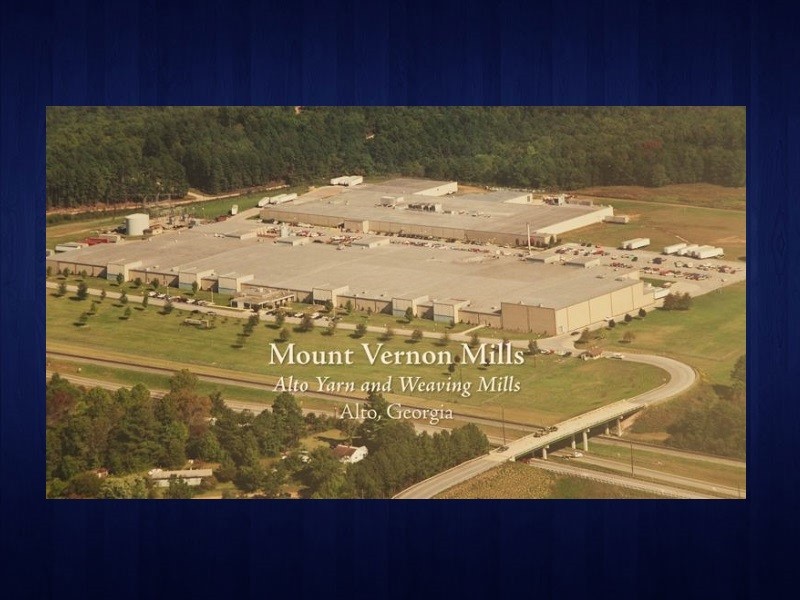 ALTO – As remaining employees report for their final days of work at Mount Vernon Mills in Alto, cars in the parking lot number in the dozens rather than hundreds.

Fabric production and yarn facilities at the Alto plants will cease when the plants close on March 9, eliminating 600 jobs.

But that imminent closing has not dissuaded those remaining employees from performing their duties.

Several employees said the mill in Alto has been good to them and their families and they will give it their all right up to the end.

“I worked there 23 years,” said Kim Painter Tench. “The people at Mount Vernon Mills were family to me, there to laugh, cry and even pray with me. We were always there for each other.”

“I took care of many injuries,” Phongsavanh said. “I did my share of new hire physicals, hearing tests and respiratory testing, and made many friends.”

Susan Martin is one for whom working at the mill was a family affair. She started at age 18 and stayed a quarter century before deciding to leave 15 years ago. Her husband Bobby remains on the job.

One of five children, Martin is a native of Trion, where the mill’s sister plant is located.

“That’s where I was born, and we moved over here when I was 9,” Martin said. “My mom and dad transferred from that plant over here.”

Even her extended family has worked at Mount Vernon Mills in Alto.

She said one is a former brother-in-law who still is with the mill up until the end.

Martin’s father has passed away, but her mother is 86 and worked at Mount Vernon Mills until she retired.

Martin’s husband, who went to Mount Vernon Mills at the same time she did, is still there and has worked his whole career at the mill.

He is a training instructor for the weave room.

The mill provided a good income, especially in the early years.

“When he was young, he would work 80 to 100 hours a week,” Martin said. “He hunted a lot. He loved to go on hunts. He’s been to Africa three times, and that was off mill work. He would work over just to get to go on these big hunts.”

Martin said Mount Vernon Mills employees worked hard for their money, but also were generous to support friends and coworkers in the times of need.

“Mill workers are hardworking people,” Martin said. “They are very hardworking people. If anybody had a hard time or there was sickness in the family or somebody had a bad wreck or anybody was in the hospital, I took up for people countless times. I went from one end of the mill to the other and took up hundreds of dollars. If somebody didn’t have something, we just always pulled together. Everybody was friends and worked hard. People would help the other one out so they could go take a break.”

Asked whether the mill was a good place to make a living for a family, Martin said it was.

“It used to be one of the best places around,” Martin said. “It paid very high at the time. I made more when I was 18 when I was starting out than I did when I quit.”

That changed as more and more jobs moved out of the country.

Martin said when the economic climate for cotton mills changed, employees didn’t get a raise for more than 11 years.

Several employees said supervisors at the mill encouraged them to do their best, even when they didn’t think they could perform required tasks.

“I had the best bosses,” Tench said. “Miguel Olandez, Tommy Wright and Rodney Thompson were always telling me ‘you can do this, Kim’ when I didn’t think I could. They taught me a lot about work life and living my life.”

Brenda Osborne Painter worked at the mill for more than four decades, retiring on Jan. 9.

“I worked at the mill for 44 years,” Painter said. “I met a lot of wonderful people, had a lot of good times. This is really heart breaking to see it close. My bosses were good to me. I hope all the best for everyone, love all the people.”

Rod LaCount has worked at Mount Vernon Mills for 35 years.

“I went 27 years without missing a day,” LaCount said.

LaCount said his best memories were back in the early 1990s when the company had Family Fun Day at Lake Lanier Islands for employees and their families.

“We always had a perfect attendance dinner once a year at Runway Fish House,” LaCount said. “And we had a Quarter Century Banquet. Those were great days with Larry Porter and Shirley Bellamy Wilkinson as the leaders and friends to everyone.”

The Alto mill was built in 1967 as a yarn operation, primarily for production of ring-spun rayon yarns. Around 2000, the facility began producing only cotton yarn.

Shutdown of the Alto plants are part of the company’s move to third-party yarn suppliers.

In addition, Mount Vernon Mills is phasing out its yarn production, cutting 100 additional jobs in Trion in February.

That’s 700 employees out of the company’s approximately 2,700-person workforce.

Even though the mill’s time is ending in Alto, its impact will continue to be felt for years to come.

“It was one of the greatest places I’ve ever worked in my 35 years of nursing,” Phongsavanh said. “Larry Porter and Shirley Bellamy Wilkinson were a great management team. White at Mount Vernon Mills, I had the opportunity to laugh, cry and pray with many friends and coworkers. I wish everyone the best.”

Friendships formed are a common theme among those who worked at the mill.

“I’ve been quit for 15 years, but I worked there for 25 years,” Martin said. “I was down there this morning taking some pictures myself. My heart just goes out to everybody that’s having to leave that’s close to retirement because they’ve spent their whole life there.”

But not all remained just friends.

“Nearly eight years ago, I married the love of my life [Kent Payne], and we met in Plant 1,” said Amanda Kelley Payne, who has had three generations of her family work at the mill over the years, whether it was known as Riegel or Mount Vernon Mills.

“I will always be grateful for each and every friend I made at Mount Vernon Mills,” Tench said.

Martin visited the plant Wednesday and said those remaining on the job are looking for other employment.

“Everybody’s looking,” Martin said. “But there’s a lot that have quit” after finding other jobs. “Several I know have gone to Kubota. Even the ones in the front office are looking.”

Many of the remaining employees told Martin they think they’re having trouble finding other employment due to their age.

“The ones it hurts really bad are the ones who are older,” Martin said.

North Georgia Technical College in Clarkesville reached out to Mount Vernon Mills employees in Alto to let them know some educational options available to them.

“We sent two representatives to the mill a couple weeks ago to talk with employees,” said NGTC President Mark Ivester, adding some 350 employees participated over two days. “First, our adult education (GED) program was promoted as an opportunity for those who did not have a high school credential. We have a list of around 45 employees who were interested in more information about this program and the ESL program.

“At the same meeting we promoted our credit programs and had a list of about 30 to 35 employees sign up for additional information about credit programs. We did offer a free application to those workers. I checked with admissions/financial aid today and we have had five or six people call into the office and identified themselves as dislocated workers from the mill. I think it is still early and the movement is slow in the beginning.”

GEDs for those who don’t have one or are without a high school diploma will be the first step for many.

“I think our work-based certificates and diplomas (three-semester program) will be what most of these workers will need to complete,” Ivester said. “The GED will be critical to those without a high school credential and then they can immediately transfer into a credit program.”

Textile workers who want to change careers do have options and the possibility of some financial aid.

“For these dislocated workers, the Workforce Investment Opportunities Act will cover many of their expenses, if they qualify: Transportation, books, childcare, tuition, fees and such. Dan Thornton from Georgia Mountains Regional Commission was at the same meeting at the site to explain those benefits to the employees. Of course, all the Pell, HOPE and usual aid may be available if the individual qualifies.”

Industries such as Kubota and others began putting up signs on the drives leading to the plant as soon as word got out that Mount Vernon Mills would be closing its Alto plants.