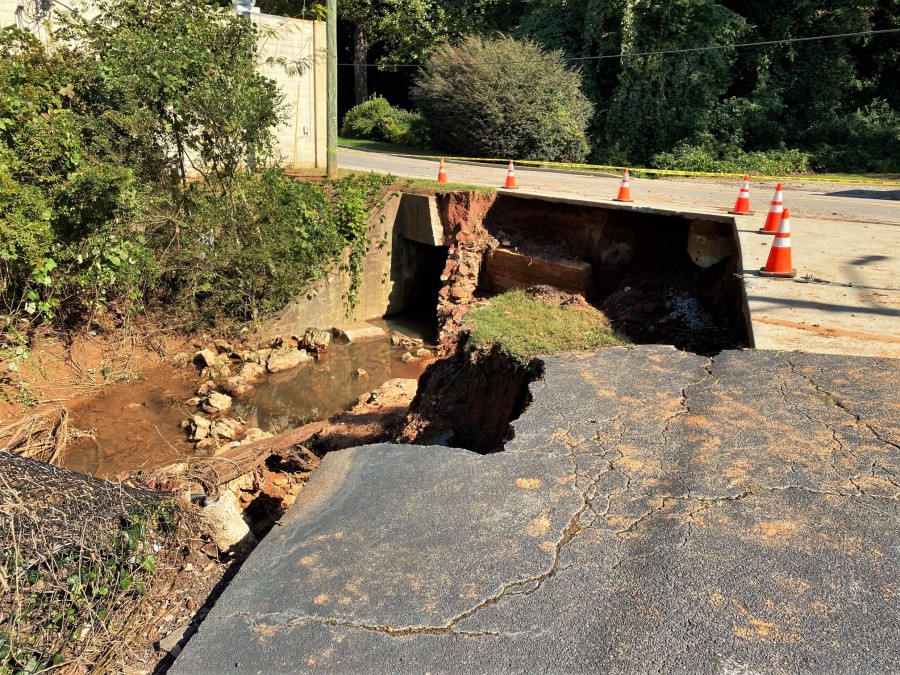 A section of Irvin Street between Wells Street and Level Grove Road remains compromise and at risk of collapse after floodwaters covered it overnight Saturday.
Rob Moore 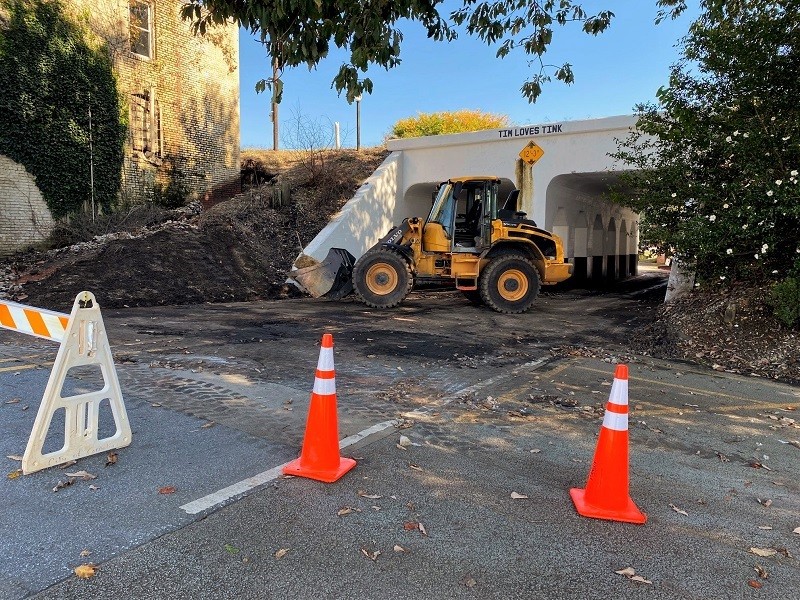 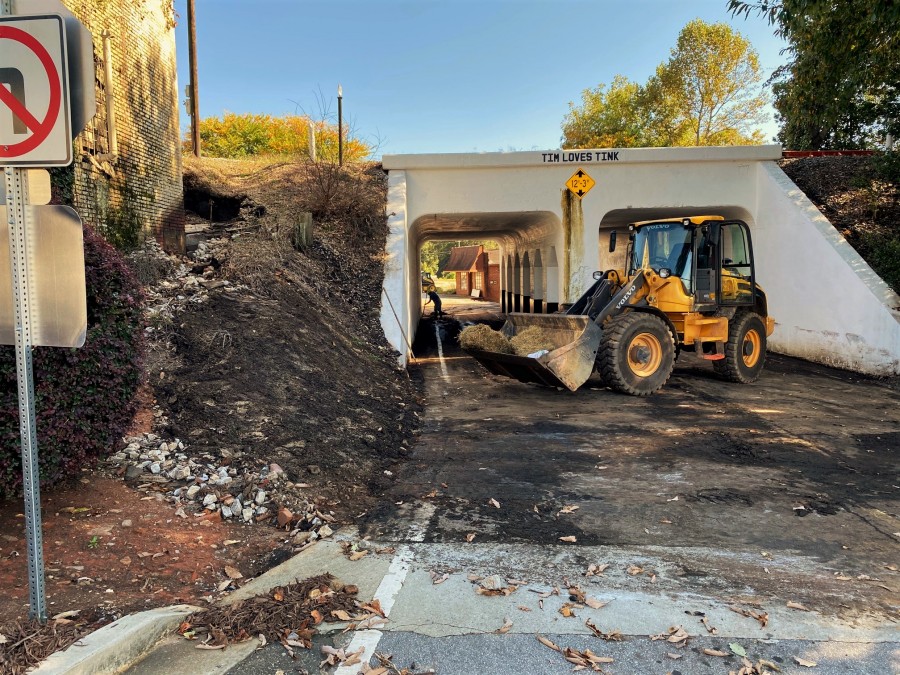 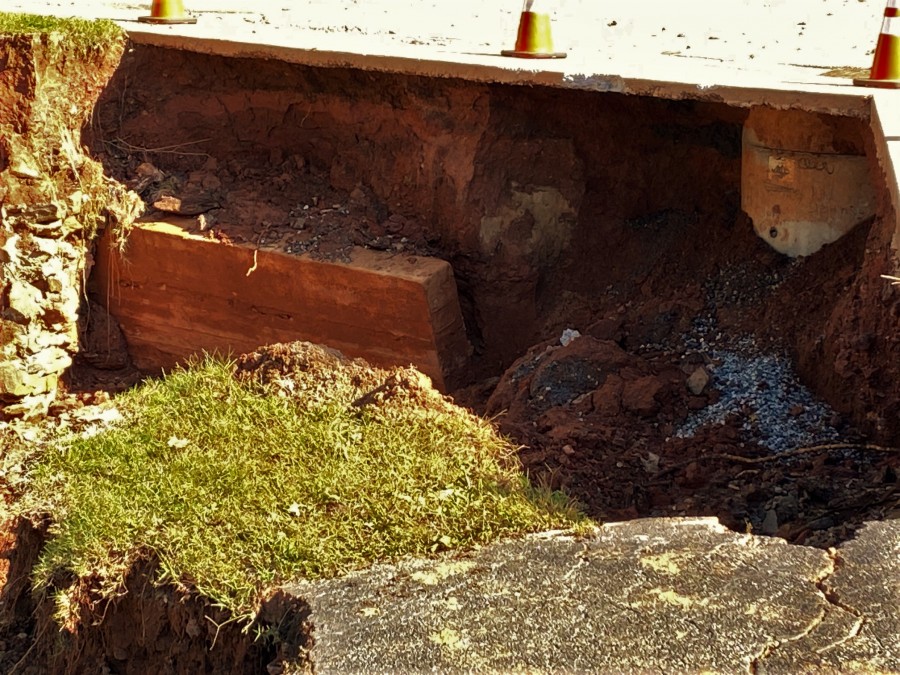 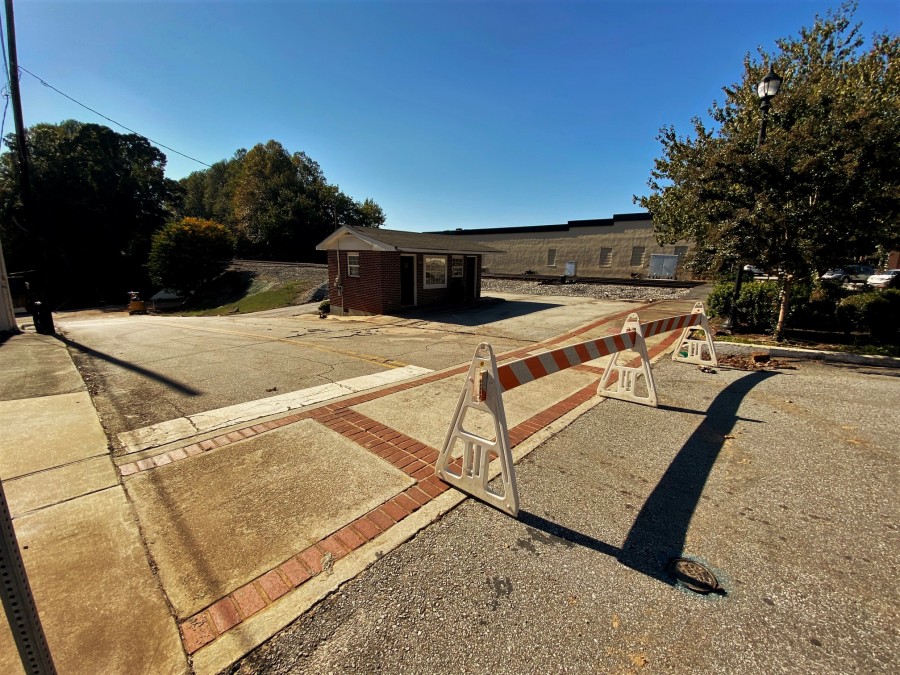 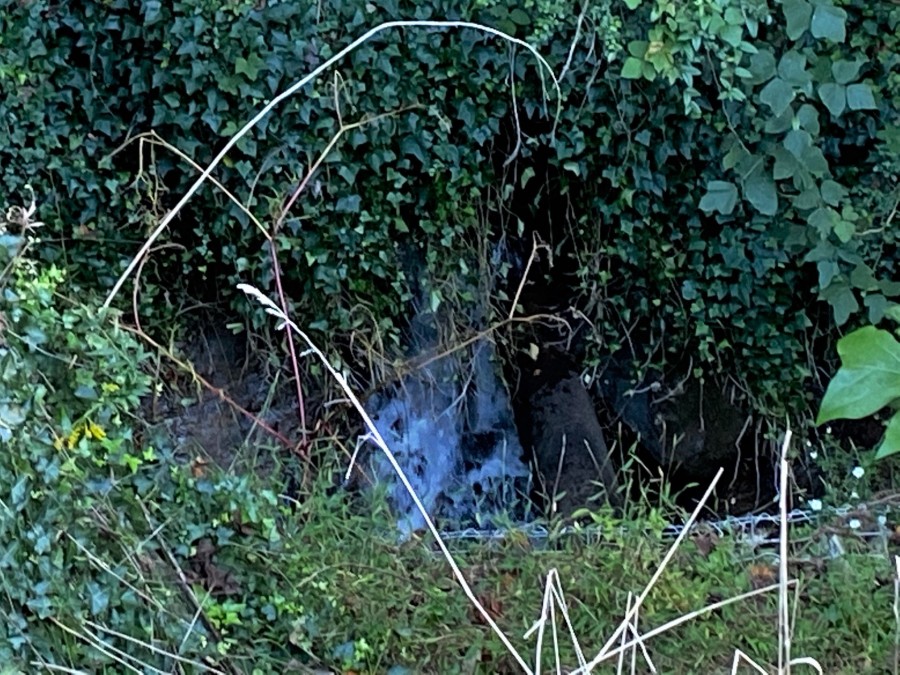 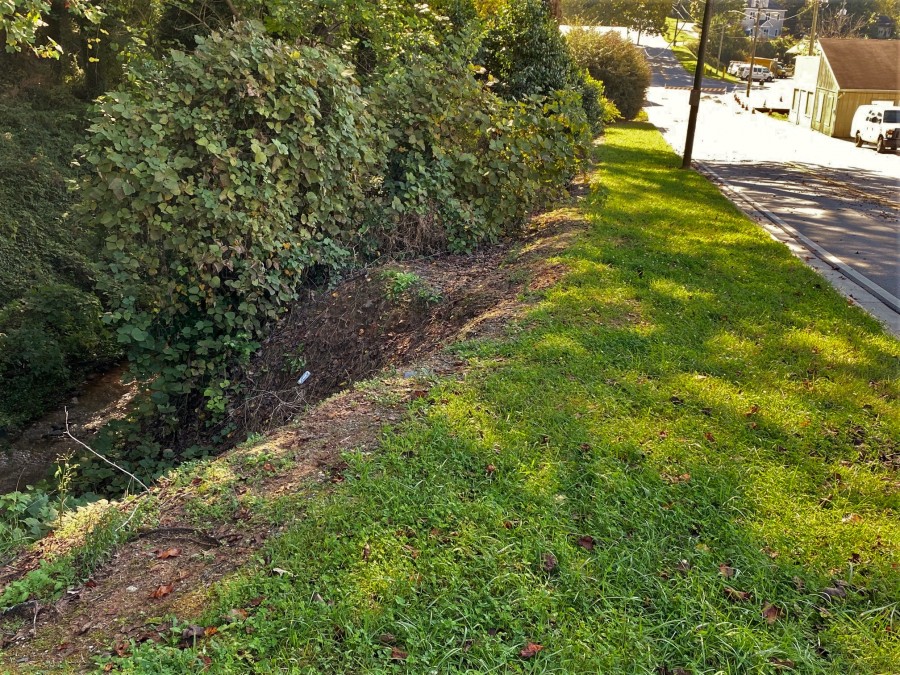 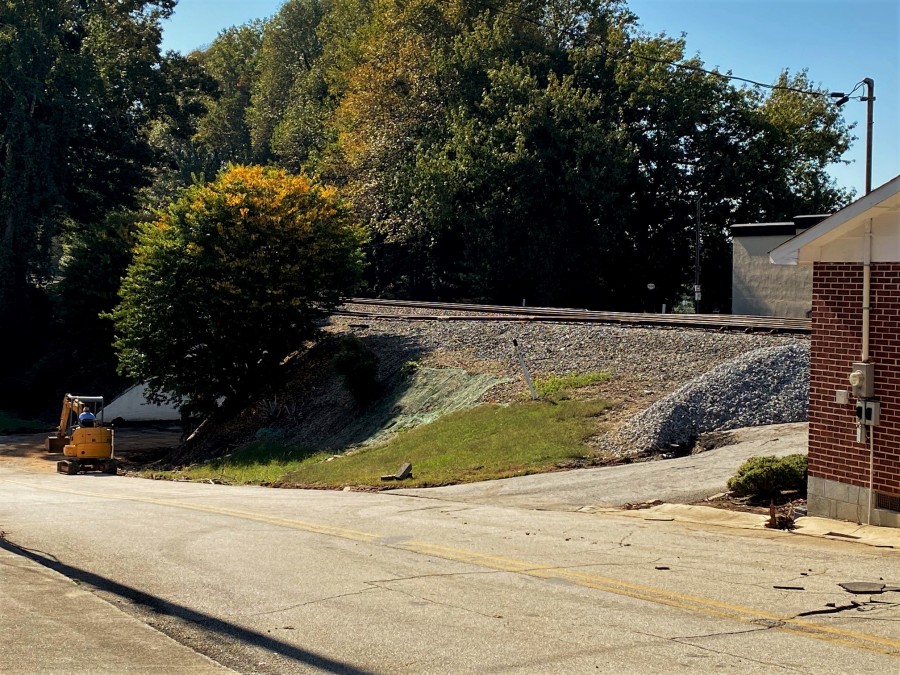 A local state of emergency order remains in place in Habersham County as officials continue to assess the damage caused by torrential rainfall from the remnants of Hurricane Delta.

“Signing of the local state of emergency by County Commission Chairman Stacy Hall gives the authority to make emergency purchases, evoke local ordinances, and access GEMA and FEMA funds and grants if certain economic damage thresholds are met. DOT staff is in the process of surveying county roads to determine an estimated cost of repair. However, this does not guarantee funds will be secured.”

Habersham County Road Department crews, in conjunction with private contractors, are working seven days a week to make repairs – especially in areas where roads serve as the only way in and out of homes and farms.

“We expect to have all single point of access roads and bridges passable by Thursday of this week,” said Habersham County Public Information Officer Carolyn McDuffie. “At the present time, public works is focused on making needed repairs quickly as possible and at the lowest reasonable costs. Both the county’s public works department and DOT are working on estimated costs for all damaged roads. DOT is gathering estimated costs to evaluate the possibility of a disaster declaration by the state and federal government.”

As reported earlier, Habersham County Schools have extended Fall Break through Friday to help the county with the recovery process.

Had a Habersham County Transportation Special Purpose Option Local Option Sales Tax passed in 2018 rather than failing, Terrell and Black said the county would be better prepared with funding to address the transportation system repair challenges created by Hurricane Delta.

“The $3 million or something that we’re going to be in the hole from this Hurricane Delta … TSPLOST would have helped cover that,” Terrell said. “All these culverts got washed out and all this stuff, that would have been taken care of.”

Terrell said while the county has “rainy day” funds in the bank for contingencies, if state or federal aid does not reimburse the county for the weekend’s damage, any reserves could be severely impacted.

“When you’re looking at something along this line, that’s got to come from somewhere,” Terrell said. “Are taxes going to have to go up to pay for it? I don’t know. That’s something that the county commission is going to have to decide. This could happen again next week, so we have to be prepared.”

Depending on the amount of damage once all impact assessments are completed, Gov. Brian Kemp will determine where a Georgia State of Emergency is issued. That could trigger potential funding opportunities for the county to be reimbursed for the expenses of repairing roads, bridges and other structures.

More than 60 roads in the unincorporated portions of the county were impacted in some way by the floodwaters that resulted from Hurricane Delta.

During the storm, at least 20 people were rescued by boat from flooded structures, including mobile homes and houses that were damaged by water infiltration.

A voluntary evacuation notice for some 70 residents south of Log Cabin Road in the Fairview Community to the Hall County line on the Chattahoochee River was put into place on Sunday, Oct. 11, and lifted Monday, Oct. 12, due to deterioration to a private dam structure in White County.

State officials on Monday determined that dam was stable, and it was safe for the affected evacuees to return home as floodwaters receded.

Callers reporting damage should be prepared to provide the address, primary contact name and number, description of damages and total dollar value when calling.

“This does not mean you will receive funding for the damages,” said Habersham County Emergency Management Agency Director Lynn Smith. “This information will be reported to the state to see if we qualify for any type funding.”

Those who have tried to navigate downtown Cornelia since Saturday night’s flooding event know it is a challenge, but City Manager Donald Anderson said the city and contractors are working as quickly as possible to get closed streets reopened.
“The worst area was around the train tracks in downtown Cornelia,” Anderson said.

Water undermined both sides of Irvin Street just before Creekside Cleaners. As a result, Cornelia engineers recommended the closure of Irvin Street between Wells Street and Level Grove Road be closed over concerns of possible road collapse.

“Heavy flooding in this area has caused the road to collapse on the Front Street side of the railroad underpass,” Anderson said.

Anderson said drivers should not expect repairs to be immediate.

“The city plans to hire two separate contractors to make these repairs so that the roads can be opened back up as soon as possible,” Anderson said. “Unfortunately, because of the amount of damage the repairs are not simple fixes, so our engineers estimate the repairs for both areas to take up to 60 days.

“We realize this creates a major inconvenience for drivers,” Anderson said. “The decision to close any road is never made lightly. Please be patient and obey the traffic barricades. The roads are closed for your protection. A vehicle that ignored the barricades on Irvin Street early Monday fell into the creek because of the damage to the road.”

Anderson said the work being done in the city through its Stormwater Infrastructure Program that started in 2017 has improved areas of the city that traditionally flood. Even with the 10-plus inches of rain received in Cornelia, Wayside Street, Galloway Street, Hoyt Street and Old Cleveland Road did not encounter any flooding over the weekend.

During a called meeting Tuesday, the Demorest City Council approved a declaration of local state of emergency in that city for 30 days or until conditions creating the need for the declaration to are abated.

Cornelia is asking residents, businesses and industries on its water system to cut corners on water use when possible.

Earlier in the week, Baldwin Mayor Joe Elam and Demorest Mayor Rick Austin asked the water users in their cities and on their water systems to conserve as well.