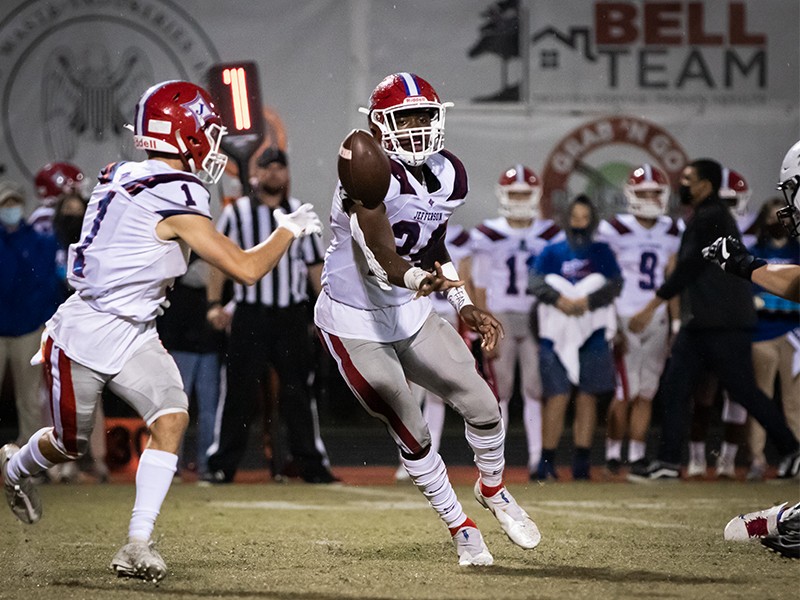 Malaki Starks pitches the ball during the Dragons' 40-10 win over Flowery Branch on Friday in a crucial Region 8-4A showdown on Friday night.
Photo/Seth Chapman
Contact Editor

FLOWERY BRANCH — In every way possible No. 8 Flowery Branch won its battle with No. 2 Jefferson on Friday night in the two teams’ Region 8-4A opening showdown.

The Falcons outgained the Dragons 313-310 and had balance running and passing (166 passing, 147 rushing) while the Dragons did not complete a pass and had zero yards. Branch had fewer turnovers (2:1) and dominated the time of possession 28:34 to 17:11.

But the Dragons dominated where it mattered most, with big plays and big defensive stops in taking a 40-10 win at Falcons Field.

Malaki Starks ran for 131 yards and two touchdowns to lead a 313-yard rushing attack for Jefferson (5-0, 1-0 Region 8-4A). But the Dragons defense stuffed the Falcons (3-2, 0-1 Region 8-4A) on a goal-line stand to end the first half and later blocked a field goal attempt that was scooped up for a touchdown to essentially put the game out of reach at 26-3 with just over 17 minutes left.

"I was extremely proud of our defense," Jefferson coach Gene Cathcart said about the goal line stand. "It was huge at the end of the first half. We were disappointed in the mistakes that we had made to put us in that situation but regardless of why we were in that situation, we were there and our guys responded. That could have been a huge momentum turn in the game [for Flowery Branch]."

The Falcons actually scored first on a 39-yard field goal from Maddux Trujillo to cap a 6-minute drive to open the game.

But Jefferson answered right back with an 8-play, 72-yard drive that was capped by a 9-yard Starks TD run three minutes later for a 6-3 lead.

After both teams committed turnovers, Starks struck again, this time connecting with Jordan Perry on a 3-yard TD pass to push the lead to 12-3. The Falcons looked poised to trim the lead and gain the momentum heading into the half driving down to the Dragons 1 in the final seconds of the half.

But the Dragons stopped David Renard on a 4th-and-1 from the 1 on the final play of the first half to preserve the lead.

Jefferson took that momentum and stormed down the field to open the third quarter getting a 2-yard touchdown run and a 2-point conversion from Kolton Jones to push its lead to 20-3 less than two minutes into the second half.

The Falcons again looked poised to cut into the Jefferson lead driving inside the Dragons 10. But Nick Evans blocked Trujillo’s field goal attempt and Kam Robinson scooped it up and raced 65 yards for a touchdown and the back-breaker for a 26-3 advantage.

Reese Johnson added a 15-yard scoring run for Jefferson on the next possession and Flowery Branch finally got into the end zone when Myles Ivey scored on a 5-yd TD run with just under 8 minutes left.

But the Dragons left no doubt, taking the next possession and using 12 plays in 5:56 second to get a 5-yard TD run from Carter Stephenson to seal it.

Flowery Branch quarterback David Renard came in as the state’s leading passer but was held to 166 yards on 19-of-32 passing with no touchdowns, a first this season.

Myles Ivey had another solid game with 127 yards on 28 carries for Flowery Branch but the Dragons defense was able to limit the damage when the Falcons reached the red zone. The Falcons were just 2-for-7 in the red zone with a field goal and one touchdown, far below their season average.