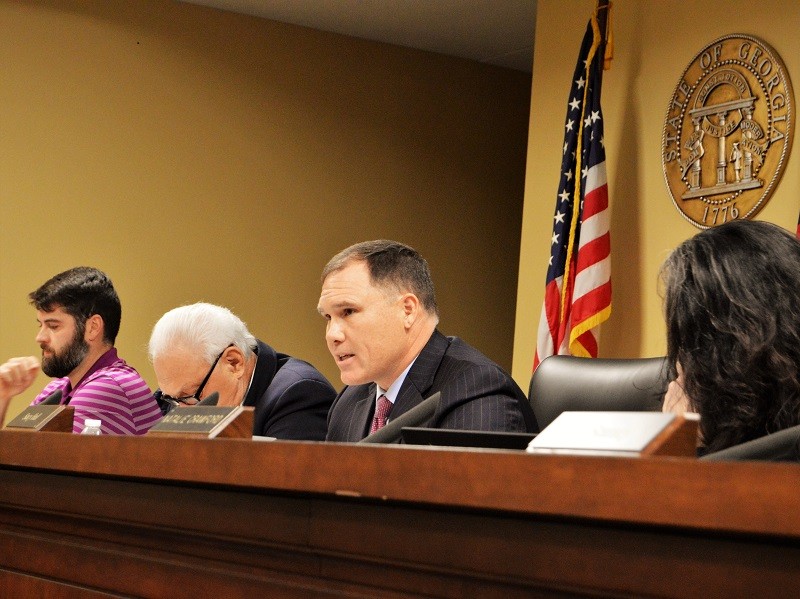 “Whereas, it is the desire of the Habersham County Board of Commissioners to declare its support of the Second Amendment to the United States Constitution and to the provisions of the Constitution of the State of Georgia that protect Habersham County citizens’ induvial, inalienable rights to keep and bear arms,” the resolution reads in part.

The resolution prohibits any agent, employee or official of the county, or any corporation providing services to the county, shall provide material support or participate in any way with the implementation of federal acts, orders, rules, laws or regulations in violation of the Second Amendment of the United States Constitution.

Prior to the vote on the matter, Commission Chairman Stacy Hall read a letter of full support from 10th District State Rep. Terry Rogers and delivered a prepared statement.

“It is of paramount importance that we the people remind these legislators that their simple dislike of a constitutional amendment makes it no less constitutional and that we will not give those rights up easily,” Hall said. “The Constitution is not an aging, irrelevant document with increasing insignificance over time. Quite the contrary; it is the very fabric that this great country has woven together. It is a living, breathing document that protects us all from an overreaching and overbearing government.”

Commissioner Tim Stamey made the motion to adopt the Second Amendment Sanctuary County resolution, which was seconded by Vice Chairman Natalie Crawford.

After seconding the motion, Crawford said she would prefer different language on certain parts of the resolution, but added she wanted to see the measure pass.

After the meeting, Crawford clarified her concerns about the resolution.

“Prior to the vote, I entered into the record my preference that the resolution not designate the county a ‘sanctuary’ county, as I believe the use of such politically-charged language to be unnecessarily divisive, but rather resolutely affirm our Second Amendment rights – the ultimate purpose of this resolution,” Crawford said.

“I also outlined my preference that we incorporate language affirming those limited rules and regulations already on the books that deal with registration and documentation with respect to background checks for convicted felons and those with mental health restrictions on possession of firearms,” Crawford said. “We have the right to be free from unwanted regulation imposed at the federal level. We have a responsibility to be vigilant in guarding our liberties and leading with common sense and compassion.”

Crawford said she was not asking for changes to the proposed resolution, but rather wanted to put her concerns on record.

“I think we have to fight for our republic,” Crawford said. “It’s important to do so.”

Additionally, the document states the Habersham County Board of Commissioners will not authorize or appropriate funds, resources, employees, agencies, contractors, buildings, detention centers or offices for the purpose of enforcing or assisting in the enforcement of any element of any acts, laws, orders, mandates, rules or regulations that infringe on the right by the people to keep and bear arms.

Earlier during the meeting, audience member Douglas McDonald Sr., a local attorney, urged the commission not to adopt the resolution.

“I’m very concerned about Habersham County becoming known as an anti-law-abiding county as opposed to a law-abiding county,” McDonald said. “If the law is the law it’s the law. If the law says that guns should be taken, then that’s the law. The law can be changed. That’s what we do in America. We don’t disobey the law; we change the law.”

Batesville resident Peter Davitto, an advocate of the resolution, spoke in response to McDonald.

“This is not against the law,” Davitto said. “If someone tells us that we have to confiscate guns, that is unconstitutional and that is against the law – and that’s what this addresses, so this gentleman wasted his breath.”