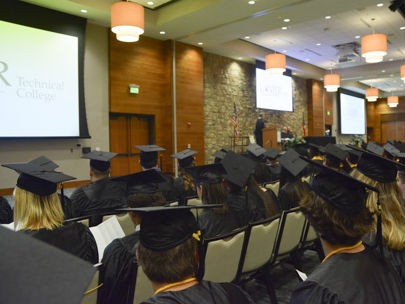 Hall County is home to to the most graduates with 111, followed by Lumpkin County with 64. Jackson County had 55, and Forsyth had 45 graduates. Barrow County with 43, and Dawson and Banks Counties had 21 and 7 respectively.

Lumpkin County had the youngest graduate, a 16-year-old.

Janis Mangum, Sheriff of Jackson County, a past GED graduate, was the featured speaker and shared her journey with the graduates. Sheriff Mangum, one of only two female sheriffs in Georgia, told the new graduates that their perseverance to earn their award was well worth the effort and would allow their lives and careers to flourish.