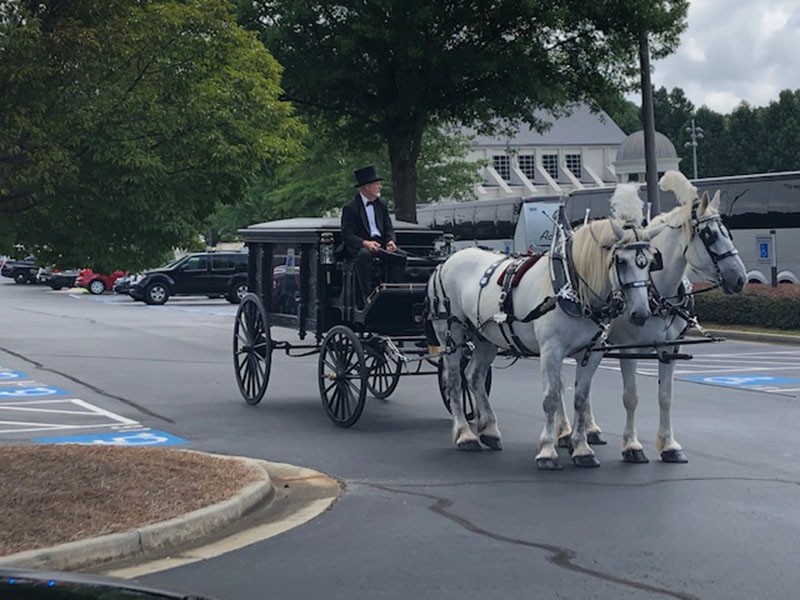 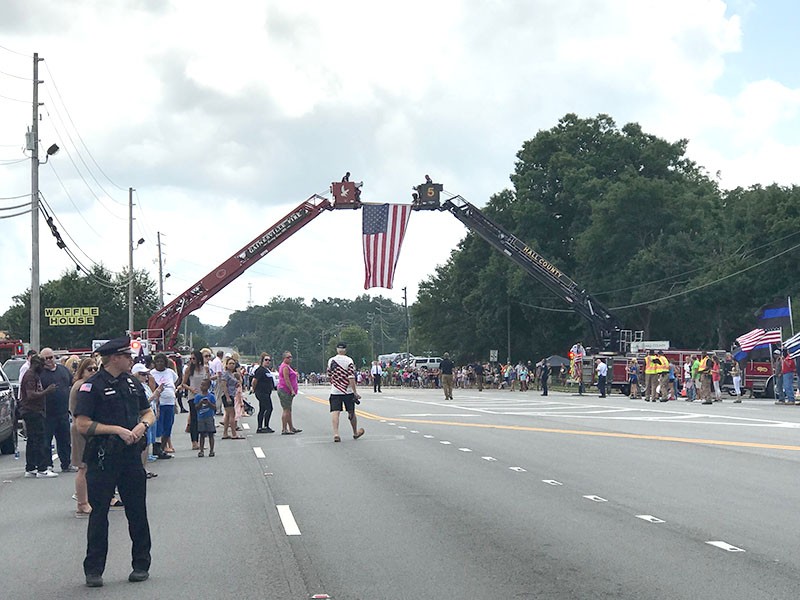 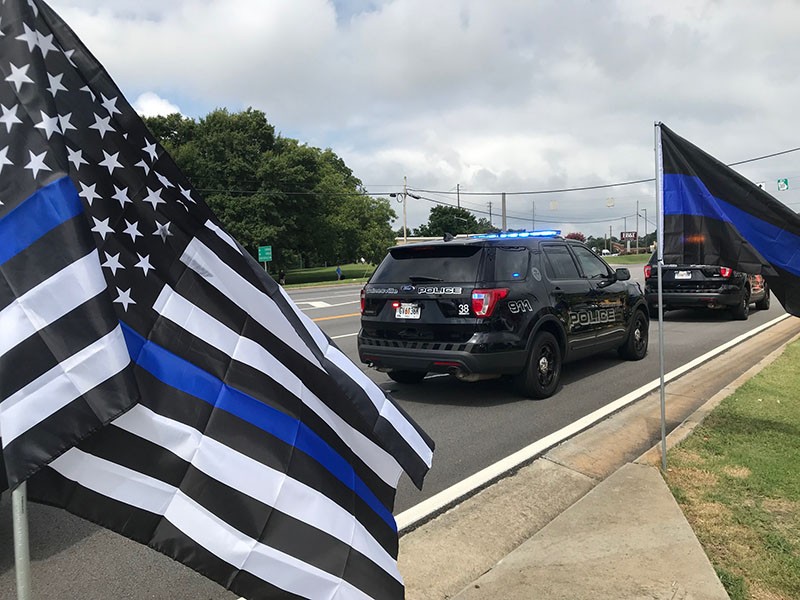 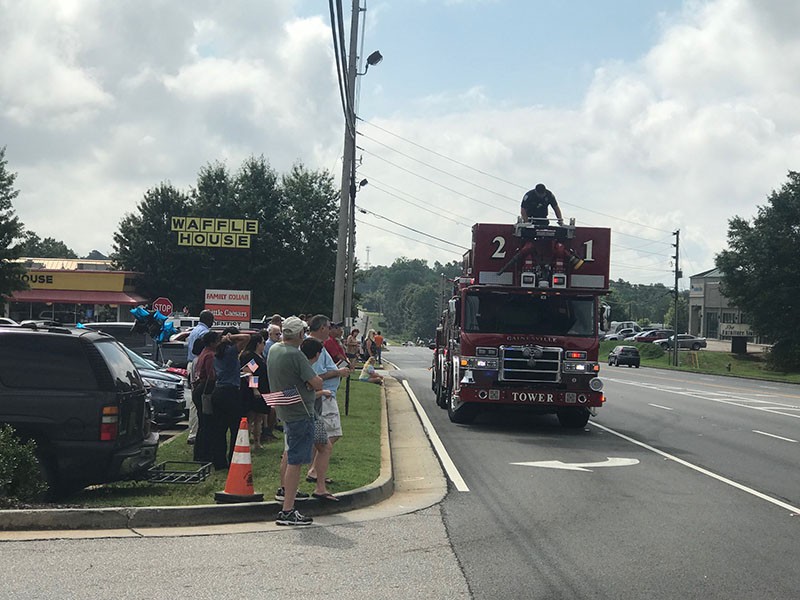 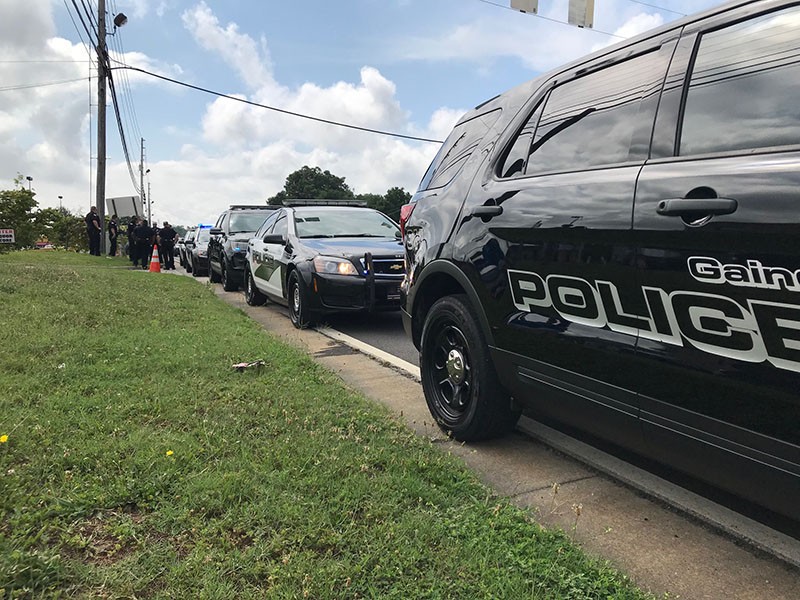 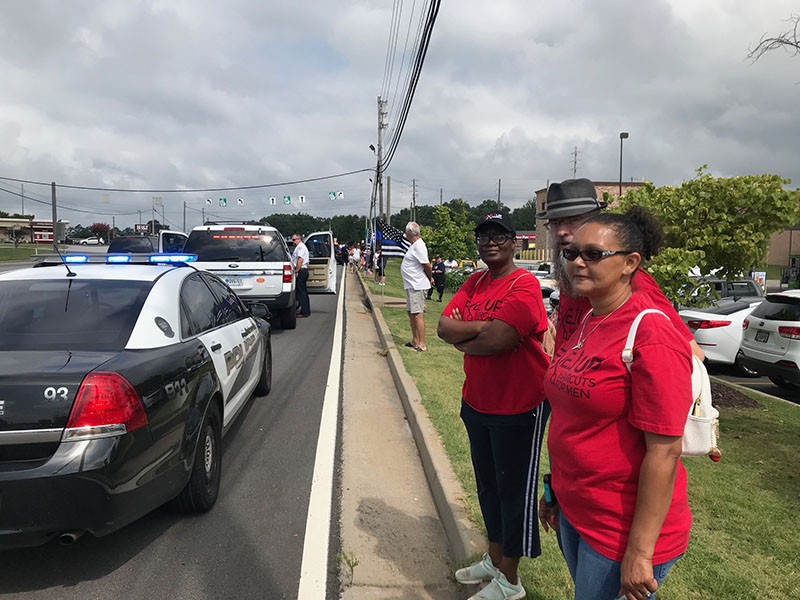 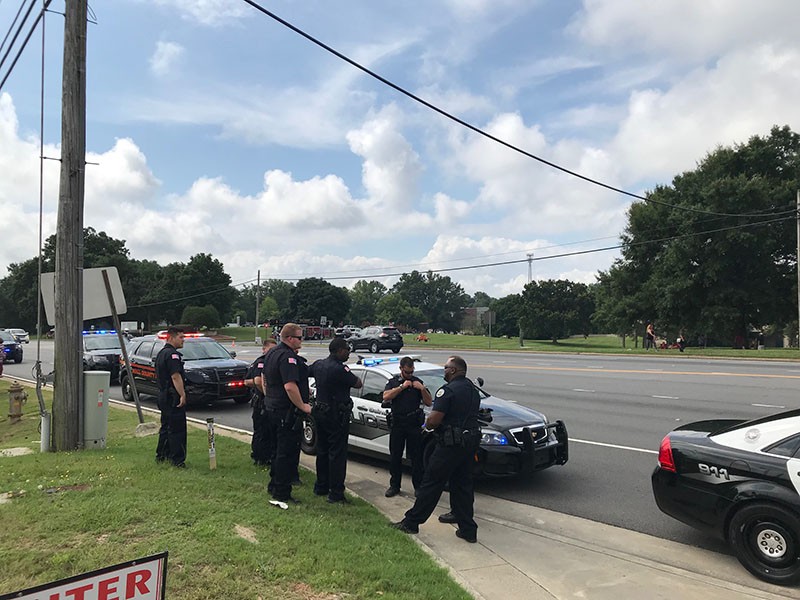 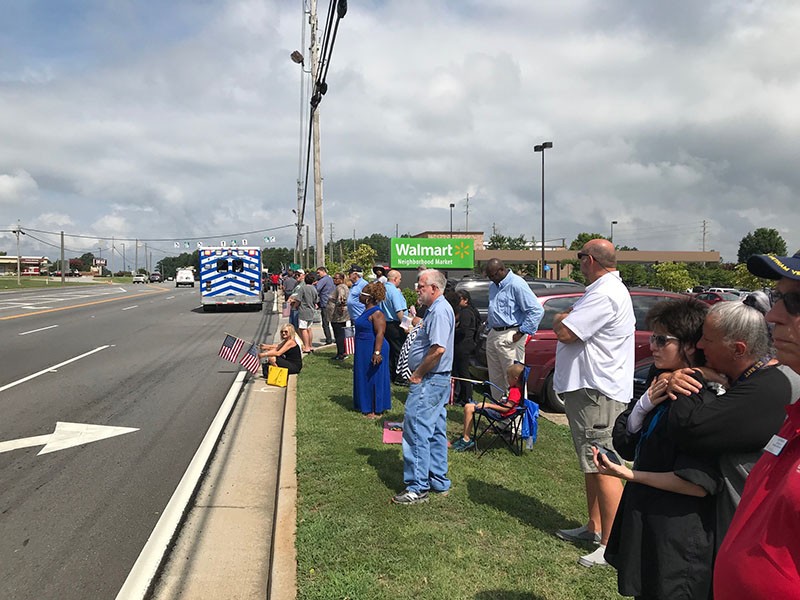 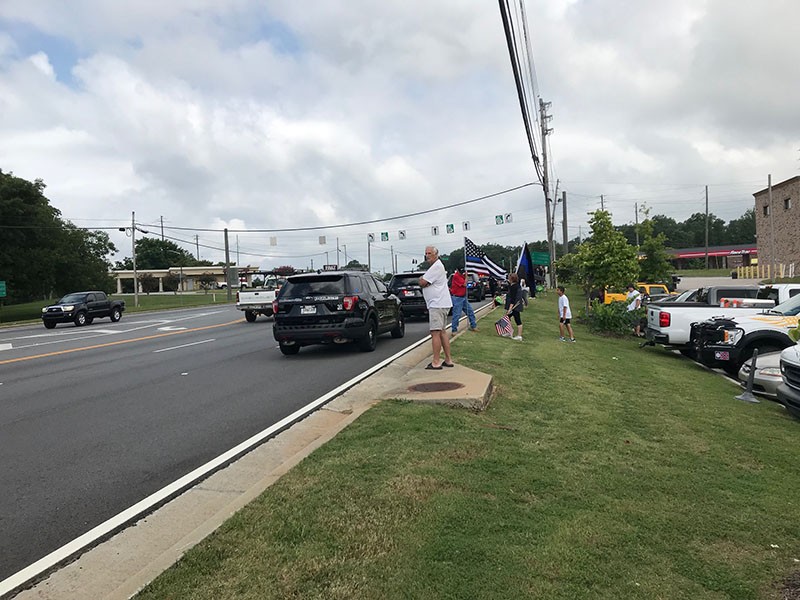 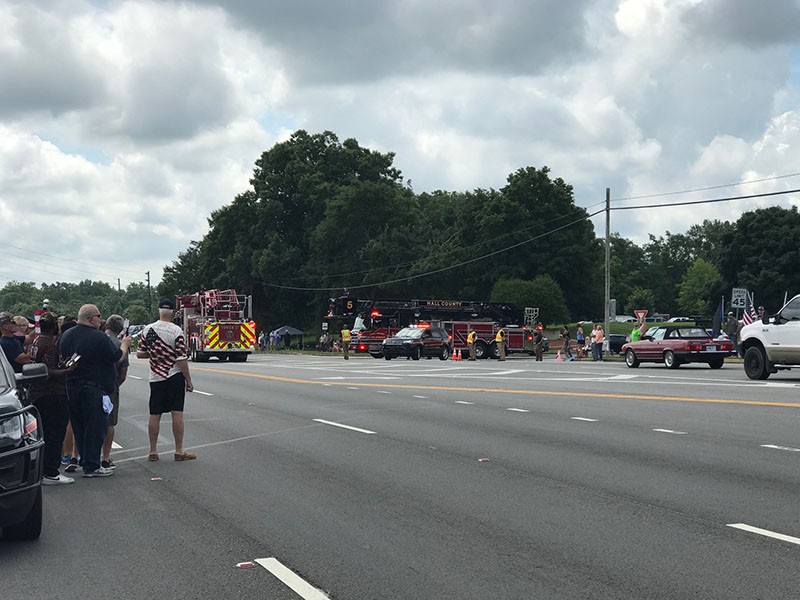 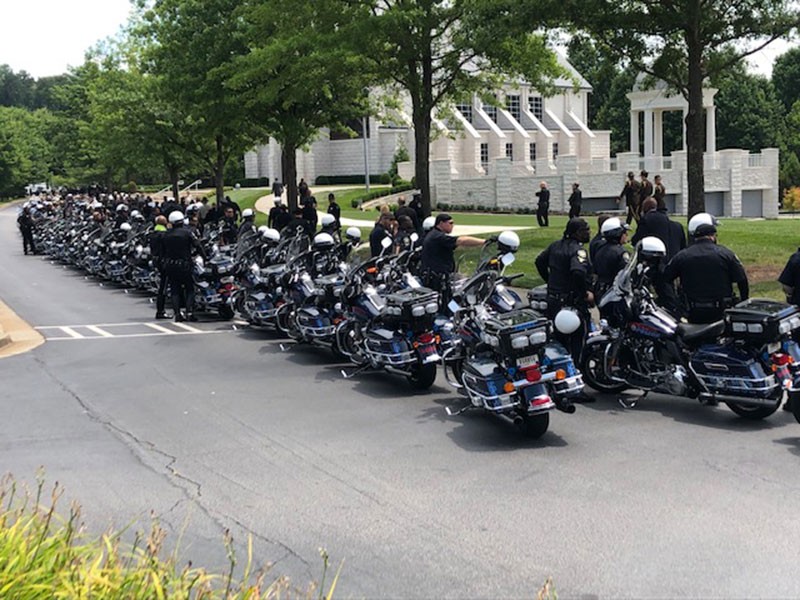 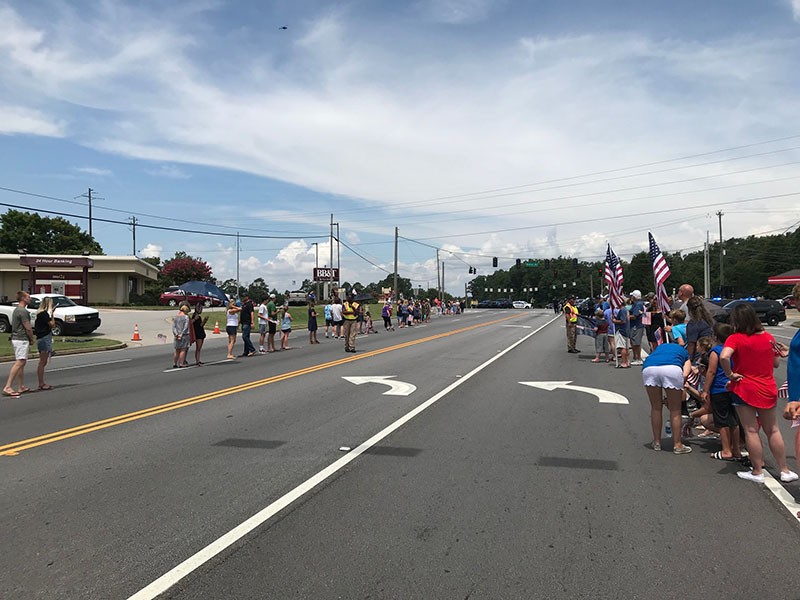 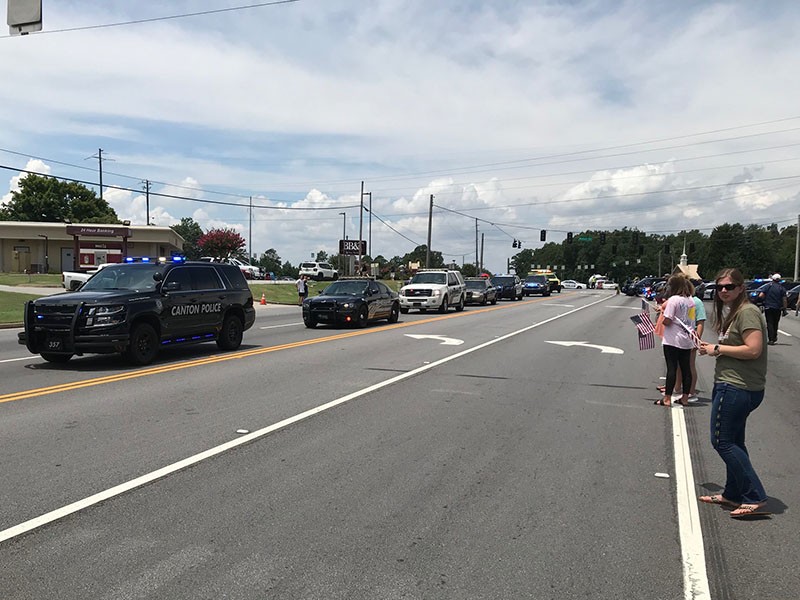 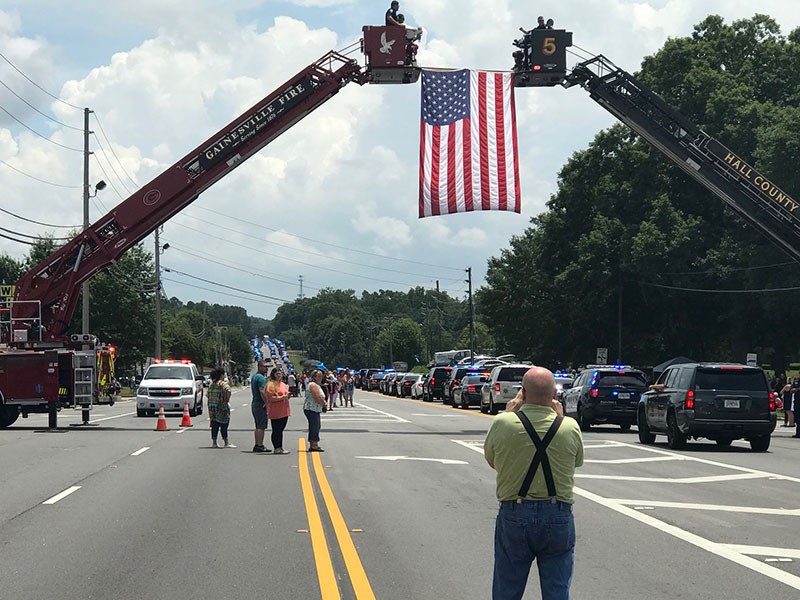 Nicolas Blane Dixon was remembered Thursday as a man who was always smiling, who adored his wife and children and who was honored to represent his community as a Hall County sheriff’s deputy.

Hundreds of mourners — including Gov. Brian Kemp and law enforcement officers from around the state — filled Free Chapel for Dixon’s funeral. He was shot and killed in the line of duty Sunday night in a gunfight with four men suspected of burglary.

Throughout the service, speakers repeatedly spoke of Dixon’s love and commitment to his job.

“He was proud to put that badge on every day and serve his community,” his younger brother, Jeremy Dixon, said. “Blane always had a smile and a hug for anyone who needed it. He was a great son, brother, father, friend and uncle.”

Following the funeral, a horse-drawn caisson carried Dixon’s body on a procession from the church to Memorial Park Cemetery. Thousands of people line the route, from McEver Road to Browns Bridge Road to Memorial Park Drive to pay their respects to Dixon, the first Hall County deputy to die in the line of duty in nearly 100 years.

“There’s no greater love than what he shared on that evening,” Hall County Sheriff Gerald Couch said. “Nicolas Blane Dixon will forever be part of our heart, our soul, our strength.”

To his family, Couch said, “Just as Blane was a member of our law enforcement family, so are you.”

Dixon’s supervisor, Sgt. Charles Hewell, told mourners that from the first day he met Dixon, the young officer was always trying to be the best deputy he could be. Hewell was on the scene with Dixon the night he was killed.

“I was there beside him chasing the wolves of society,” Hewell said. “I was in the shootout. There wasn’t a cry or a scream. He just said he’d been hit. His demeanor was calm.”

Hewell said when he got to his friend’s side, he knew he was seriously injured.

“I’m sorry that I could not do more to save him,” Hewell said. “But I truly believe that night Blane saved me.”

Hewell said he and Dixon were close not just because of the job. Both men were about the same age and both had young families. Hewell said they often talked about their families and how much they loved them.

Following the church service, the funeral procession moved to Memorial Park Cemetery. People began arriving as early as 10:30 a.m. to pay their respects. Procession took well over an hour as hundreds of police vehicles from dozens of agencies including Athens-Clarke County, Atlanta, Savannah and Bibb County drove to the cemetery.

“When Deputy Dixon fell, I just wanted to come up and show my respect to him and his family and just thank all law enforcement for what they do for us, protecting the community," Steve Paul, a military veteran and Hall County resident, said.

Some of the staff rom Level Up Haircuts for Men, a barber shop in Gainesville, turned out to watch the procession. The barber shop served many Hall County deputies, including Dixon.

"It's definitely heartfelt that we get out here and show our support. As well, we offered all the officers yesterday discounted haircuts, just to make sure they all got cleaned up today," Agelica Tabor said.

At the cemetery, Couch presented Dixon’s wife with the American flag that had draped his casket.

Toward the end of the service at Free Chapel, Jeremy Dixon, speaking on behalf of his whole family, thanked the community for its prayers in the last week.

“We are humbled and honored by the amazing outpouring of support,” he said. “We are blessed to live in such an amazing community.

“Every man's life ends the same way,” Hemingway said. “It is only the details of how he lived and how he died that distinguish one man from another.” 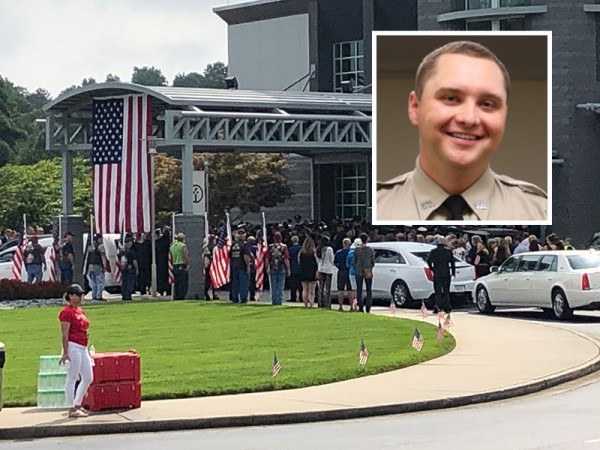 Deputy coroner identifies Habersham man found dead in vehicle
Albert Richard McFall, 65, of Clarkesville is the man who was found dead off Ben Jones Road north of Clarkesville over the weekend, according to Habersham County Deputy Coroner Kenneth Franklin.
Updated
By Rob Moore

Amazon announces expansion in Georgia, huge facility to be built on Gwinnett/Dekalb line
While Georgia might have missed out on Amazon's second headquarters, the online retailer still wants to do business in the state.
By AccessWDUN Staff 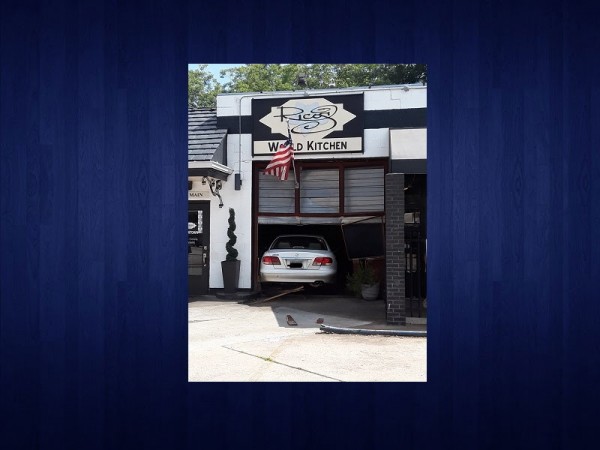