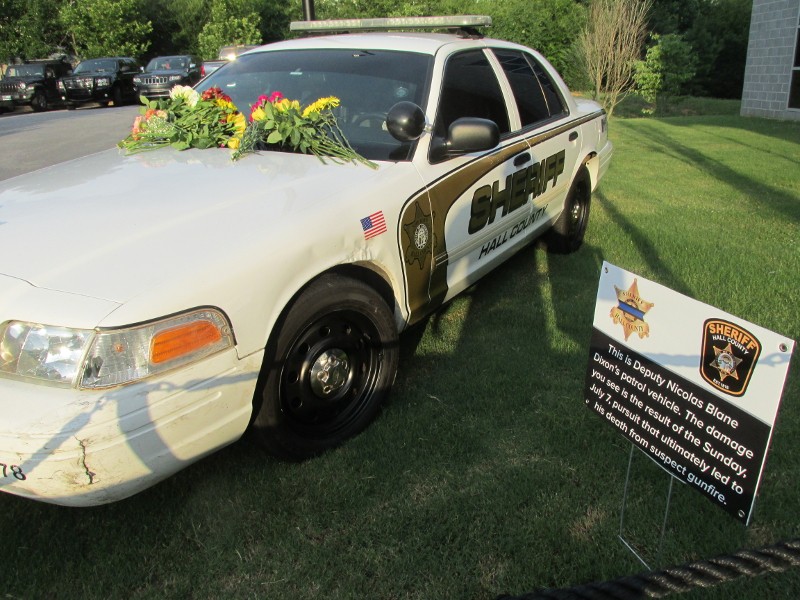 Nearly 600 people stood quietly Tuesday evening before the main entrance to the Hall County Sheriff’s Office as tribute was made to slain Deputy Nicolas Blane Dixon.

The candlelight vigil wasn’t something planned by the Sheriff’s Office, Public Information Officer Derreck Booth told the subdued gathering; it just happened.  “We’d like to thank ‘Gwinnett Backs the Blue’ Facebook group.  This was a complete surprise to our agency and our community, and we determined late this afternoon that they were indeed the ones that spearheaded this.”

Parked to one side of the stairway leading up to the Sheriff’s Office complex was Dixon’s patrol car with a flowers spread across the windshield, and a sign saying the damage to the car was a result of the traffic stop Dixon made that eventually led to his death as he chased the fleeing suspects on foot.

Booth and Sheriff Gerald Couch spoke of the overwhelming show of support arising from the local community, and said it was only appropriate to allow those affected by the death of Dixon an opportunity to gather and celebrate Dixon’s life.

Couch spoke of how Dixon made a big impact on those with whom he worked, and never hesitated to confront danger when the need arose.  “Blane was the type of individual that always was the first in line, and he ran towards danger, and he wanted to stamp out evil.  That’s what he did that night.”

Sobs could be heard throughout the audience.

Dixon’s father, Freddie, told the crowd that law enforcement had been his son’s lifelong dream.  “When he was little…he was always trying to look out for somebody, always trying to find somebody to protect.  When he decided to join Hall County…I started saying, ‘Chase your dream.’, and this was his dream job.”

Hall County Deputy Tyler Ward said he was the last to speak with Dixon before he passed.  Ward described how met the police cruiser in which Dixon was transported to the Northeast Georgia Medical Center at the Emergency Room door.

Ward said he leaned into the cruiser to check on his friend, and that Dixon “opened his eyes one last time”, looked at Ward and said, “I’m hit.”

Ward said Dixon struggled to stay alive but lost his battle.  “He didn’t stop fighting and that’s what we’re all trained to do.”

Flowery Branch High School students Katelyn Vinson and MacKenzie O’Brien stayed after the vigil ended.  They said they knew few deputies but they did know Dixon.

Vinson explained that relationship with Dixon as having started at the end of the recent school year.  Vinson said she was stopped by Dixon as she pulled into O’Brien’s driveway for a minor traffic violation.  Rather than issue the teen a citation Dixon chose to use the incident as a teaching moment.

The flashing blue lights on Dixon's cruiser definitely got Vinson's attention, she said with a nervous laugh.  “He told me to focus on school and be safe in the community,” she explained.  They added that Dixon would regularly patrol their neighborhood and wave whenever he saw either of the girls.  Those encounters with Dixon left a lasting impression on the two young ladies, one they say helped reshape their impression of what police officers are really like.

Watch the accompanying video above for the words and support from the surrounding communities. 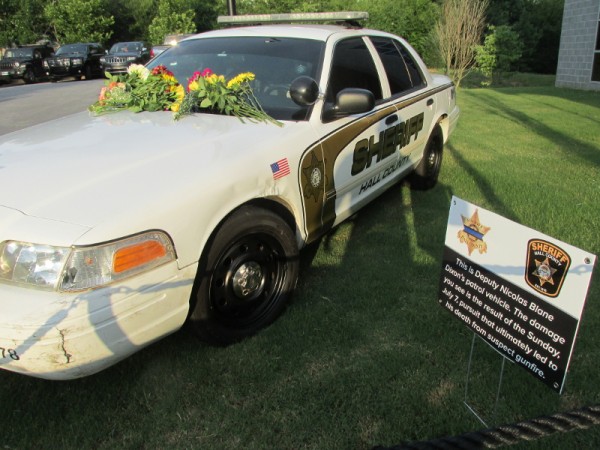 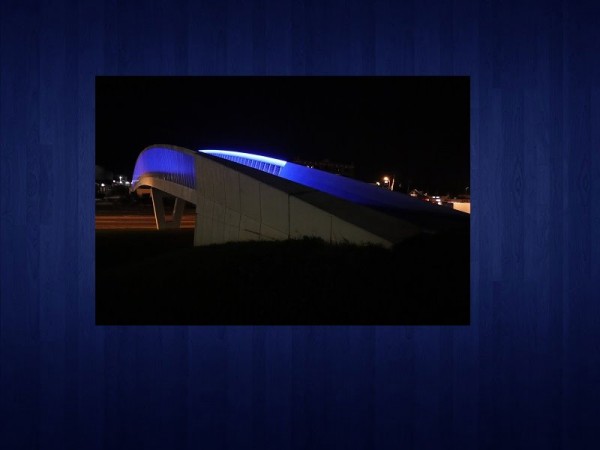 Hall County infant dies after being bitten by dog
A baby died when she was bitten by a dog Tuesday afternoon, according to authorities with Hall County Fire Services.
Updated
By B.J. Williams 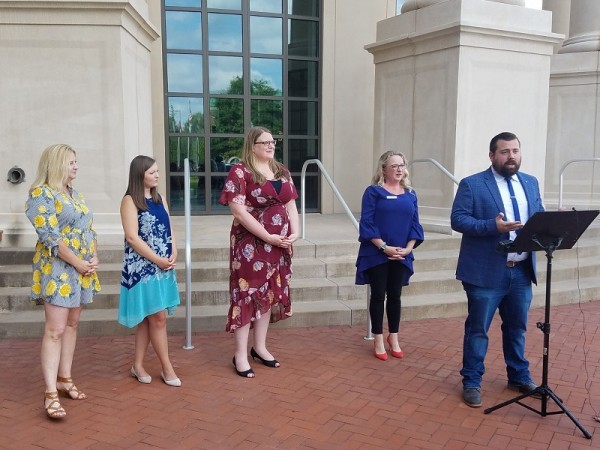 Several agencies address mothers in crisis and hope to prevent more abandoned newborns
Agencies specializing in supporting parents who encounter difficulty caring for their children hope to use the story of abandoned Baby India to educate and encourage other struggling parents.
By Rebecca Hubbard 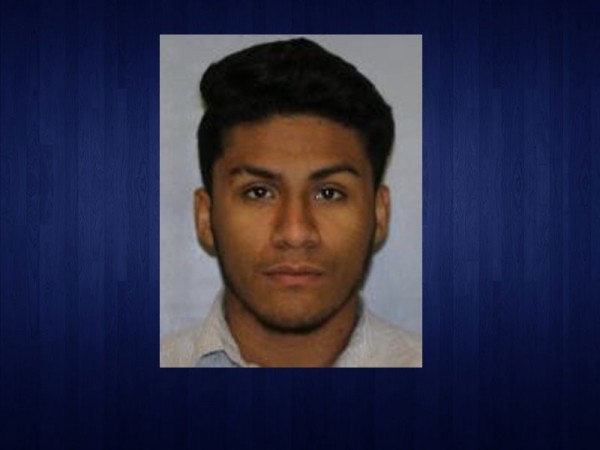 Suspects in deputy's murder have criminal history
As the Hall County Sheriff's Office continues the investigation into Sunday night's shooting death of Deputy Nicolas Blane Dixon, detectives also are looking into other crimes that allegedly occurred at the hands of the teenagers who have been charged with Dixon's death.
By B.J. Williams
Privacy | User Agreement | Contact | Advertise With Us
2020 © Jacobs Media Corporation. All rights reserved. EEO Report. Website by Full Media
Login / My Access
close
Search