Chicopee: 'This is something Hall County cannot lose' 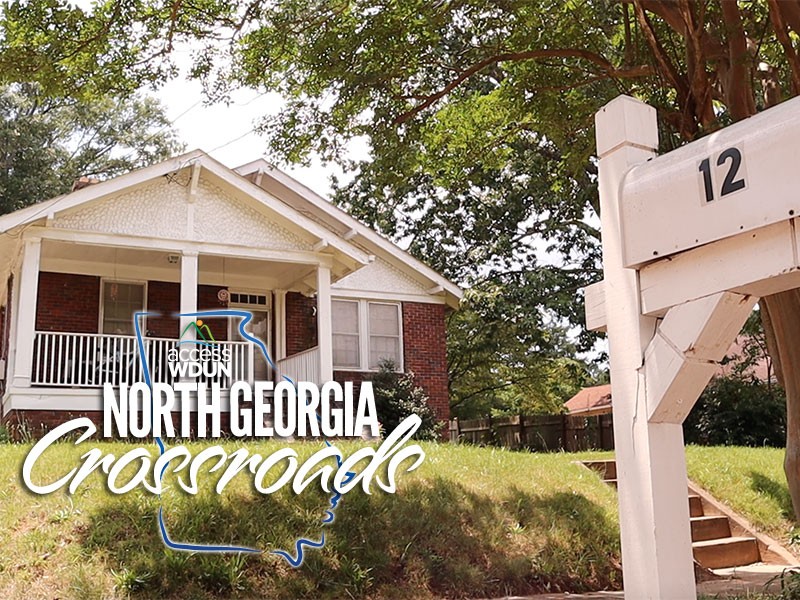 Blink and you think you've missed it, the red brick homes neatly lined up under the shade of lofty oak trees and outlined by fresh white sidewalks carving a path around the semicircle village. On the other side of Atlanta Highway, a smattering red brick buildings are interrupted only by copper doors and window pane after window pane. Off the main road, the woods stretch.

This is Chicopee, the former Johnson & Johnson mill town between Oakwood and Gainesville that was built to stand out. The state-of-the-art cotton mill remains industrial, though it now produces beer, still adjacent to a village home to both new neighbors and old friends.

While the village will never be exactly like it was when the last brick was laid in 1927, the townsfolk are laying new bricks, hopeful for the restoration, resurgence and renewal of their beloved town.

Robert Wood Johnson, Jr., purchased a cotton mill in Chicopee, Massachusetts, and he promptly selected a tract of land in Georgia for another mill, according to the Johnson & Johnson company website. This one was closer to the cotton supply and the railroad, as the demand for sterile surgical supplies boomed during and after World War I.

Johnson wanted more for his mill workers than other mills in the United States had at that time. Mills were typically multi-storied, haunting buildings with little light. The Chicopee Mill was instead built like a college campus and had large windows that allowed plenty of natural light in. Johnson wanted natural light for the safety of his workers, so they'd make fewer errors and for their own comfort.

“For the most part, textiles industries were dark, dingy places, multiple stories. For Johnson & Johnson, the modern manufacturing sciences they were pursuing, built something that’s full of light and very open in order to not only manage their processes in manufacturing but also felt that it enhanced the worker’s experience to work in a place like that, versus somewhere that was dark and dingy,” said Pap Datta, owner of Left Nut Brewery, which is in the former mill administration building. “Johnson & Johnson probably at the forefront of thought at that time with respect to design of factories that are workplaces.”

Even more boldly, Johnson chose to push the mill out of the center of his village, allowing the community space to be the focal point.

"Historically, we had underground utilities and tunnel system in the village. So when it was constructed in the early 1920's, it was revolutionary for a community and what it offered," said Village Association President Allison Bailey. "To think that Robert Wood Johnson had this vision to create this community that had all of the amenities. It had tennis courts, a swimming pool and you might think running water and electricity, but for the 1920s, that was a huge thing. And it's just amazing to get to have that experience of living in a piece of history."

Bailey has lived in the village for three years. She said 500 homes were planned, but only 217 were built, with only 211 standing today.

The homes filled with families and the village catered to them, with a clinic, barber shop and general store on site. The kids went to their own school and played on ball fields, tennis courts and playgrounds. Streetlights illuminated the lush green spaces and sidewalks.

Hap Hood, a Gainesville native, said growing up, he always heard stories about his grandfather's grocery business in Chicopee.

"He had a small grocery store across from Chicopee and on pay day, he'd cash the checks of the workers at the mill,” said Hood. "Then he would also take the grocery orders to have them ready for them when they came to get their checks cashed."

Hood estimated this was around the 1930's. His grandfather, Bill Hood Sr., eventually closed up shop in Chicopee as his furniture business, Hood Furniture, took off.

David Haynie remembers the brightness of a Chicopee childhood a little bit later. He grew up in the village and left, only to return to restore and live in his mother's home after her passing. Haynie described his childhood in Chicopee as if it were paradise.

“Probably the favorite thing I remember more than anything was as a kid growing up, we basically had a playground that was 2,000 plus acres, the Chicopee Woods, which now is the golf course and the Elachee Nature Center,” said Haynie. “That was our stomping grounds, running grounds, riding bikes, motorcycles, building forts out in the woods and just playing. It was a great place to be as a kid.”

Chicopee Elementary was built in 1949, and Garrett said she remembers having to go to school behind the mill before the new building was finished.

“It had seven classrooms and it had the teacher’s lounge, the library and everything that went with it, but no lunch room. So all the years over here we had to walk home, eat lunch and walk back. Because the class (sizes) were so small in numbers, they could get the best teachers that they could find.”

Garrett said even now, she remembers her teachers and the pageants put on in gym. “They had an art club, a glee club, sports. Everything that went the school.” She said she and her 24 classmates went through the seventh grade to graduation.

Garrett moved to Chicopee at just 2 years old, only leaving the village as a newlywed. She and her husband, Morris, returned in 1967 and their two daughters grew up in Chicopee. The Garretts have renovated their home to make it more comfortable for modern living, but that’s not the only change they’ve seen.

“[The Johnsons] sold the houses probably about the middle 50’s, so that’s when it sort of began to change but not really that drastic until the last 10 years or so. When the older people, when they started passing away - like on the street I was raised on, my daddy was next to last one to pass away at 89 years old. But a lot of the older people were gone and they would just rent the houses and sometimes they just didn’t really check them out.”

“It’s still, in a certain extent, it’s still home, but in some ways it’s different too. It’s not like it was when Johnson owned the mill and he owned the village and the stores and everything like that. So I guess the village has just changed some. But there’s changes everywhere, everywhere you go, there’s changes. Some are good, some are not.”

Garrett said they still wouldn’t consider leaving Chicopee, citing the work they’ve put in on the house, the fact their girls grew up here, the quiet nature of the community and the fact it’s not in a high-development area.

It was fate, Pap Datta said about turning his brewery dreams into reality in Chicopee Mill. The old building needed a lot of work, but when a location in Midtown Gainesville fell through, Datta decided to take a chance on Chicopee.

At a zoning hearing, Datta noticed several rows of older citizens listening to his case for rezoning. He feared pushback.

“It’s a brewery, we are in Gainesville, it’s a bedroom community,” he said. After the zoning board approved his plan, he said, “Those people came up and started shaking my hand and said, ‘you know, we live across the street and we’re so delighted you’re going to bring this building that our grandfathers, our fathers and our uncles all toiled so hard in and left a legacy, that their legacy will not be lost.’ To me that was a huge, huge moment that said we did the right thing,” said Datta. “What we did was preserve not only history but a part of the soul of the people who used to work here and their descendants.”

Extensive renovations allow the old administration building of the mill to turn in to Left Nut Brewery. Offering an innovative experience was something that became part of Left Nut’s identity. From bikers passing through seasonally to folks inside the perimeter of Atlanta traveling to see the brewery, Datta said the elements of experience made the difference.

“Although this industry is booming, more breweries are popping up everywhere, we are one that combined the brewery experience along with the historic experience and I think that destination aspect of it truly works,” said Datta. “This has become a really good magnet for tourists who are traveling in this area and want something unique do. The other thing we do is, we offer a lot of unique experiences from food trucks, from live music, pottery and art shows, all kinds of things at this venue. We even had an R-rated puppet show here, which had standing room only that day.”

By turning Left Nut Brewery into a venue of experiences, Datta revitalized some of the ideas Johnson had for his mill. Careful to leave as much history intact as possible, Datta says they exposed the red brick walls on the inside, left as many original wavy glass window panes as possible and exposed the heart of pine ceilings that had been covered with paint and duct work.

Left Nut Brewery isn't the only thing bringing people in to Chicopee as tourists. Elachee Nature and Science Center brings education and the outdoors together, the 1,500 acres of Chicopee Woods boasts 21 miles of mountain bike trails and there's even a different kind of green just down the road at Chicopee Woods Golf Course. On the other side of Interstate 985 and through those expansive woods is the Chicopee Agricultural Center and another Hall County elementary School, Chicopee Woods Elementary.

The land where Johnson’s guest house once stood now features enormous oak trees, an elegant arrangement of rose bushes and a pile of bricks. The bricks will be permanent, but installed instead of in a stack as part of the Memorial Garden, hopefully before the community’s annual Independence Day annual parade.

Haynie has been working in the garden, carefully laying bricks through the June heat.

"It's just some way to give back to the community, you know, trying to get people involved and, I don't know, it was something I wanted to do and I thought it was important to recognize some of the past residents here,” he said. “This is just a way to show our appreciation for what they've done over the past years when they were living here."

Bricks are still available for purchase. More information can be found on the Historic Chicopee Village website.

The village was placed on the National Register of Historic Places in 1985. Just a few years shy of its centennial, Bailey said the villagers wanted to see a better village.

"The residents have been working with Hall County Planning and Zoning to develop a historic preservation ordinance for the county, and we're hoping that that's something that will come to fruition. Our goal is by our 100th birthday of Chicopee Village that we actually will be recognized as a historic district and have maintenance guidelines, some local ordinances to help us in preserving this piece of history. This is something that Hall County cannot lose. We have to protect it."

Location: On Atlanta Highway/GA 13 from Gainesville, just past the intersection of Memorial Park Drive.

Government: Unincorporated, part of the city of Gainesville


© Copyright 2020 AccessWDUN.com
All rights reserved. This material may not be published, broadcast, rewritten, or redistributed without permission.