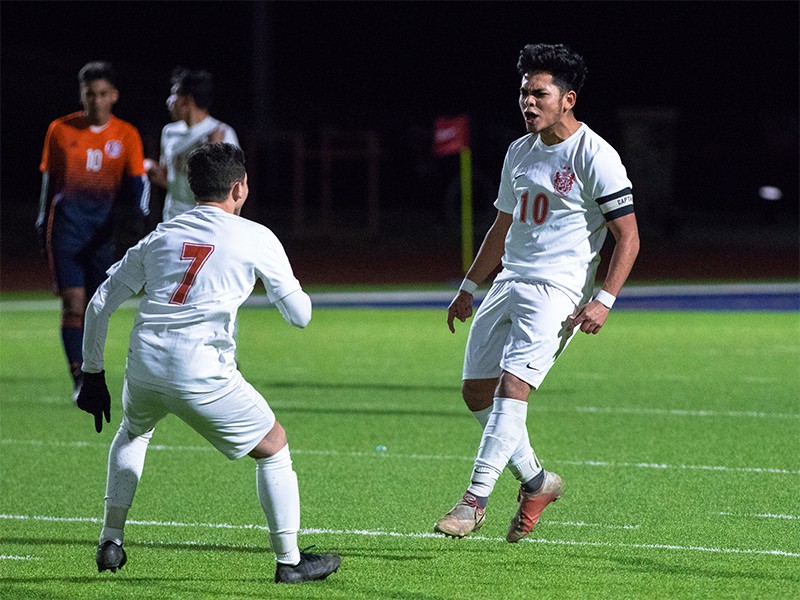 GAINESVILLE — The Gainesville boys soccer team clinched the Region 8-6A title Friday night with a nail-biting 1-0 victory over Lanier at City Park Stadium.

The lone goal came from Bryan Lopez on a rebound off shot from Pedro Santos that hit the ball. Eduardo Bautista recorded three huge saves to keep the game tied as the Red Elephants (13-2, 8-2 Region 8-6A) pitched their sixth shutout of the season.

Gainesville next will travel to Cherokee Bluff on Monday before closing out the season against arch-rival Johnson at City Park on Thursday.

Every one wearing a LSA jersey will be admitted for free.

Jose Gomez, on an assist from Jonathan Miralrio, and Junior Arellano, off a feed from Rudy Orosco, notched second half goals for the Knights.

Cooper Bowen had four big saves in goal and got stellar defensive play from Diego Chavez and Cristian Maldonado. The Knights midfield of Alex Arellano, Eliam Chavez and Cole Bowen was stellar in helping hold off the Mustangs in the second half.

Johnson next will travel to Stephens County on Tuesday before closing out the regular season against arch-rival Gainesville at City Park on Thursday.