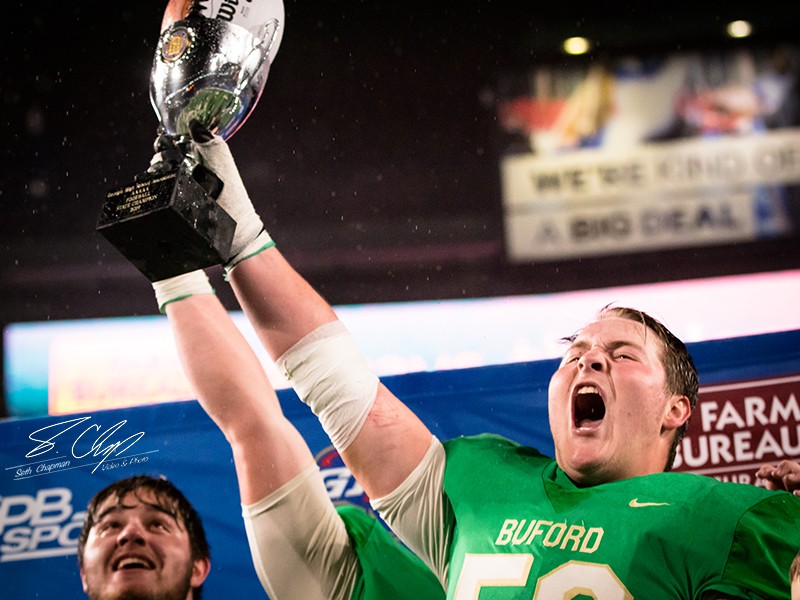 An excited Seth McLaughlin holds up the state title trophy after helping lead Buford to a 17-14 overtime win over Warner Robins in the Class 5A finals.
Photo/Seth Chapman 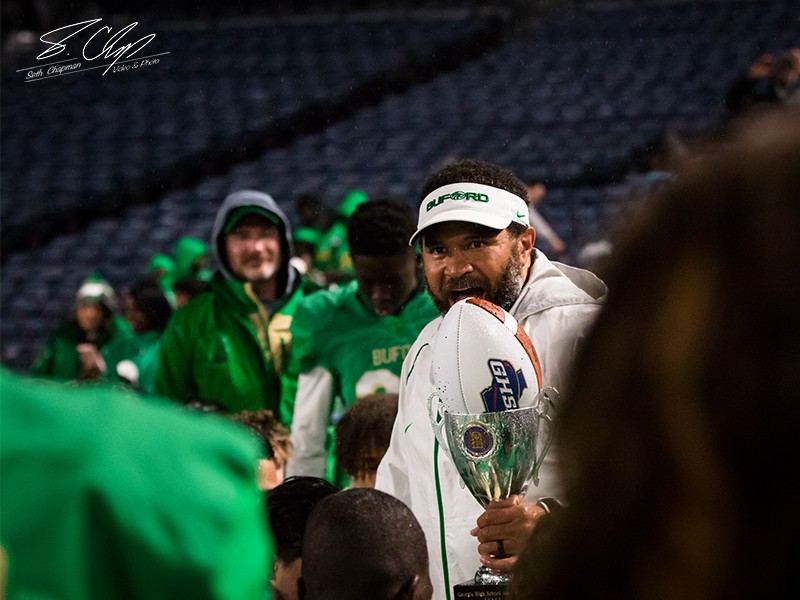 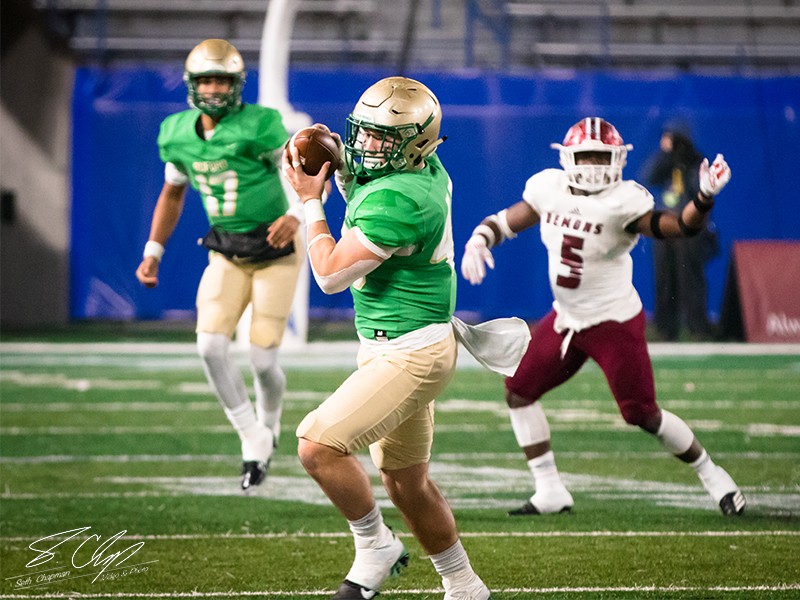 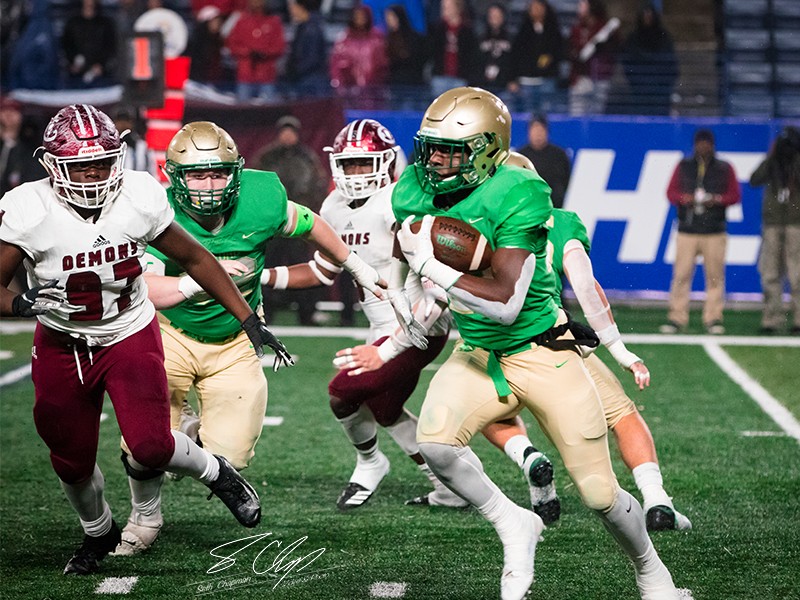 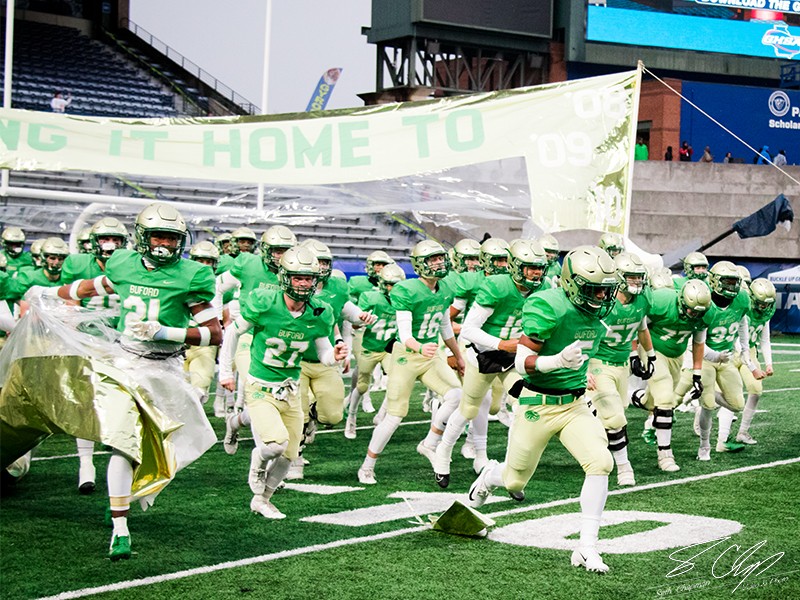 With his offense struggling in a game that was slowly getting away from the Wolves, the first-year Buford head coach did the unthinkable in the biggest game of the season: he went to his back-up quarterback.

The spark was just what the Wolves needed to complete a thrilling 17-14 come-from behind win over Warner Robins to capture the Class 5A state championship at a cold, wet Georgia State Stadium.

Sophomore Ashton Daniels responded with the biggest clutch performance of his young career going 7-of-13 for 77 yards passing in just over a quarter, including connecting with Jamarius Isaac on a 22-yard game-tying touchdown pass with just 23 seconds left.

Moments later Isaac would provide the killing blow intercepting a Warner Robins pass in the first overtime. Three plays later Hayden Olsen kicked the Wolves into the record-books with a 24-yard field goal to win it.

“We have confidence in our entire team but we just felt that by making that change it would give (Warner Robins) a different look since Ashton (Daniels) throws right and (starter) Jarvis (Evans) is a lefty,” Appling said. “We had no problem making that change right then. And Hayden has done that all year for us so we felt good there.”

It was the second game-winning field goal in three weeks for Olsen, who hit a 28-yarder to beat Carrollton two weeks ago.

It’s been the rare occasion when Buford has come into any game as an underdog over the past 20 years. But few were giving a banged-up 2019 Wolves team much of a chance in this finals.

Appling said they used that as motivation.

“We’ve been short-handed all year,” Appling said. “The kids have stepped up all year and tonight was no different. I just can’t say enough how proud I am of this group and how they just kept working, kept chopping wood. They earned this.”

Buford was without Elijah Turner most of the year. A slowed Gabe Ervin, who had just returned two weeks ago, was forced to leave in the fourth quarter. Players came and went in the finals.

Isaac said he asked for the opportunity to help Buford bring home its first trophy since 2014. Luckily, they listened. And he responded.

“I told them to give me a chance and I wouldn’t let them down,” Isaac said. “The touchdown was big but I think the interception was probably the bigger play. I felt after that we had (the game).”

The game-turning pick, which came in the end zone, was something the defensive group had discussed at halftime.

“They ran that play on us in the first half so we talked about if they run that again that we needed to jump it,” Appling said. “Jamarius did a great job on that play.”

“When I saw their guy go in motion I knew what was coming,” Isaac said. “It was underthrown and I just jumped in front and went and got the ball.”

The first half was all about the defenses, at least until the Demons offense was able to find some seams late.

The teams traded punts on their opening possessions with Buford forcing a quick three-and-out. The Wolves offense managed just one first down on the opening play, a 16-yard pass from Evans to Sawyer Sieracki.

The Wolves defense got the first big break forcing a Warner Robins fumble on the next possession with Ryland Gandy scooping up the recovery and returning it to the Demons 20. Buford needed six plays but did eventually did cash in with a 1-yard TD run from Ervin on fourth down for a 7-0 lead with 3:21 left in the first quarter.

The defenses continued to dominate as they traded four punts again with the Demons taking over on their 41 with 5:55 left. After 1,200-yard rusher Jahlen Rutherford was stuffed repeatedly for just 24 yards, the Demons brought in smaller and quicker James Smith, who immediately got things going. Smith popped off a 24-yard scamper down to the Buford 33 and then a 6-yard run by Smith moved them to the Wolves 21.

From there bruiser Ahmad Walker, who also had two sacks in the first half on defense, rushed for 9 yards inside the 15, capping the drive with a 2-yard plunge over the top of the defense to tie the game at 7 with 1:53 left in the half.

Other than the one Warner Robins drive, neither offense was able to generate the big plays from the earlier rounds. Buford had just 67 total yards at the break, only 37 yards rushing, while the Demons did finish with 116 yards at the half, getting 101 yards on the ground.

The second half appeared to have started quick for the Wolves. Facing a 3rd-and-4 at their 25, Victor Venn popped through a hole at a stacked Warner Robins line and raced 75 yards for a touchdown. But the play was called back for holding and Buford was forced to punt.

The Demons’ Ty Carr then provided the biggest play of the game up to that point with a 55-yard punt return as he serpentined all the way down to the Wolves 23. Demons’ quarterback Jalen Addie wasted little time scampering around left end on the next play to give the Demons a 14-7 lead with just under 10 minutes left in the period.

Both defenses again put the clamps on and it looked like the Demons got the clincher stopping the Wolves on fourth down at the Buford 42 with 5:34 left. But the Wolves defense gave the offense another chance forcing a fumble two plays later to get the ball back with 4:49 left at their own 22, with Isaac getting the recovery.

After the game-tying touchdown, Warner Robins had one last chance. The Demons moved to the Buford 33, with help from a pair of Buford penalties, including a huge 15-yard personal foul. But Daniel Barber’s 50-yd attempt with 2 seconds left was short and to the right as they went to overtime.

In a postseason of stellar defensive outings, the effort in the finals may have been the crowning moment for the Buford defense. They held the Demons, which came in averaging nearly 450 yards a game, to just 280 total yards.

Warner Robins was averaging over 40 points in the playoffs. The 14 points matched a season-low in their only other loss to Colquitt County (31-14).

“The defense had its back against the wall a couple of times and just made some big, bg plays,” Appling said. “That is Buford football to us.”

The Wolves managed a meager 251 total yards and for one of the few times over the past few years actually produced more passing yards (131) to rushing yards (120). But the Wolves’ domination in time of possession (30:31 to 17:29) kept the potent Demons’ offense off the field.

Now, with its first title in hand in five years, does this mean that the Wolves are back for good?

“I sure hope so,” Appling said. “But it’s the seniors on this team that should get the credit. They just did a great job of providing leadership all season.” 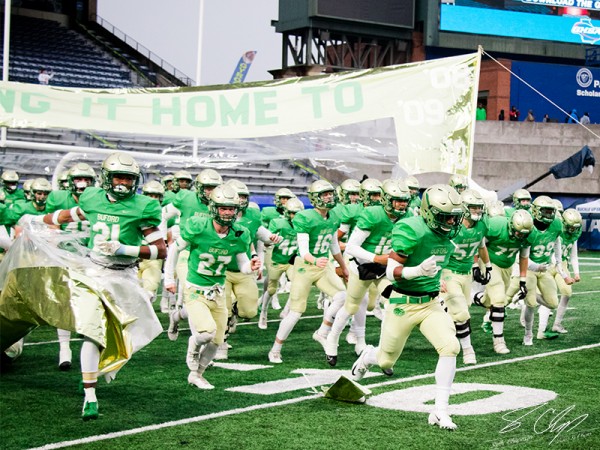 Buford wins 5A title in dramatic fashion
Buford captured its 12th state title, but first since 2014, in dramatic fashion as Hayden Olsen drilled a 25-yard field goal in the first overtime to give the Wolves a thrilling come-from-behind 17-14 win over Warner Robins Friday afternoon in the Class 5A championship game at a wet, cold Georgia State Stadium... 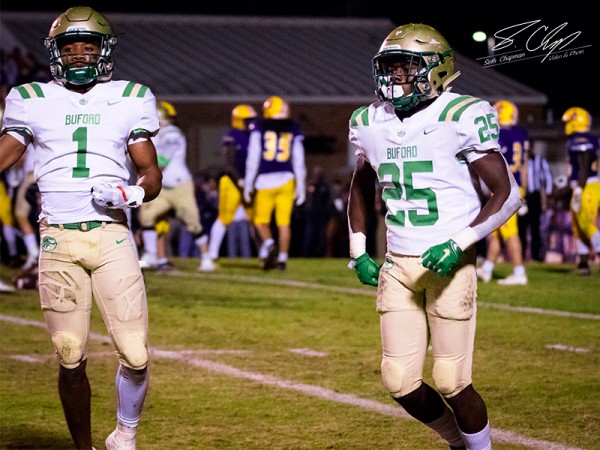 Buford's rushing attack has led the way this season
Sometimes the best defense in football is a punishing, time-consuming rushing attack. For the Buford Wolves, that is exactly what they do. 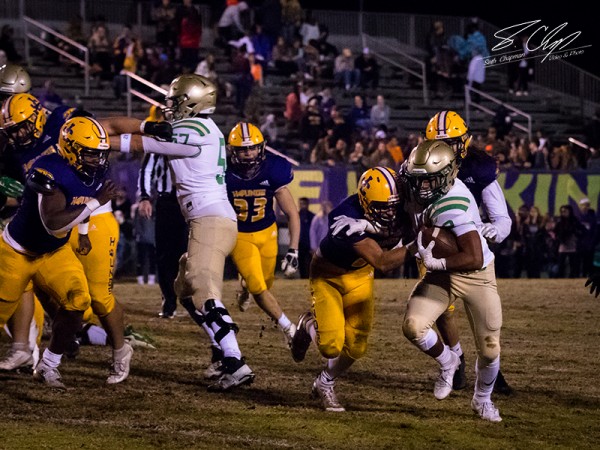 High expectations surround Buford-Warner Robins title game
It's just the common thought in high school football: Buford is supposed to be there.
Sports 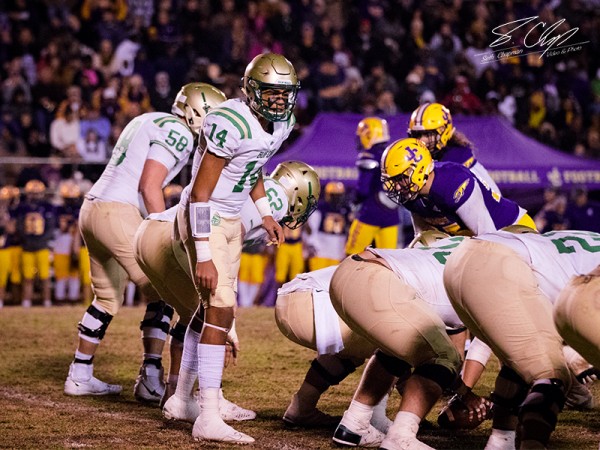 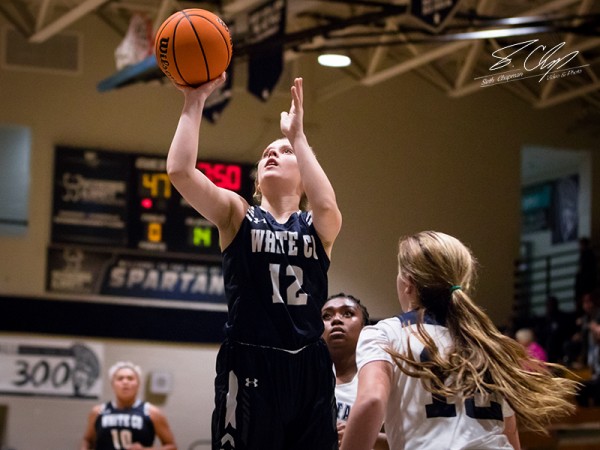 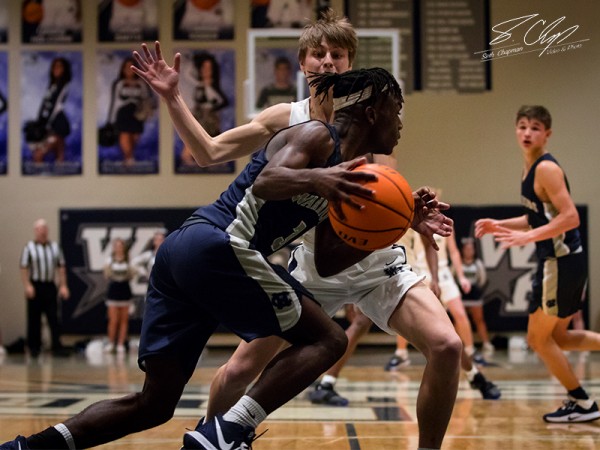 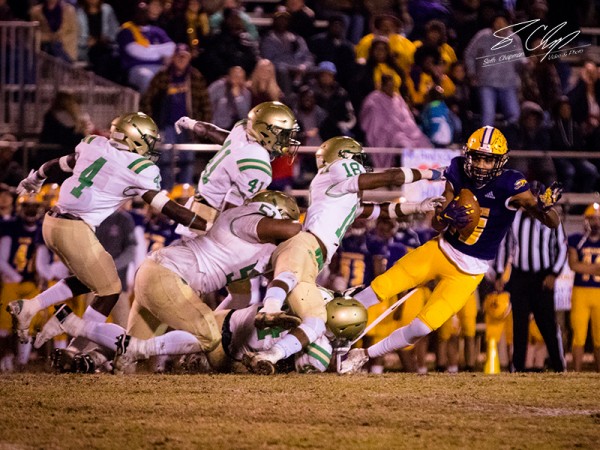 Buford stuffs Jones County to advance to 5A finals
There were no outward feelings of relief. But you could see the brow of Buford football coach Bryant Appling crease just a little less and a slight smile creep across his face during his postgame interview after his Wolves pulled off a dominating 29-0 smackdown of Jones County on the road Friday night in the two teams’ Class 5A semifinal... 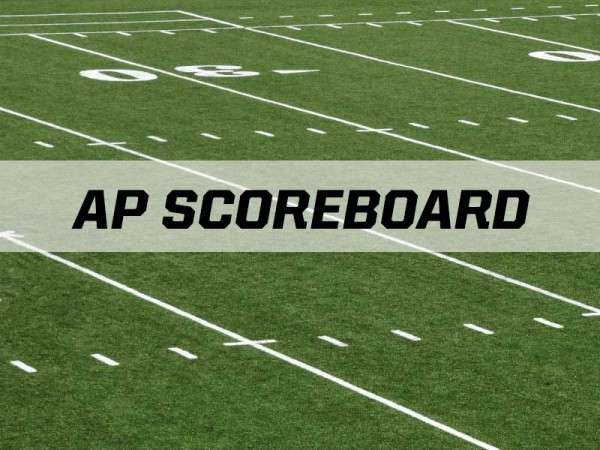 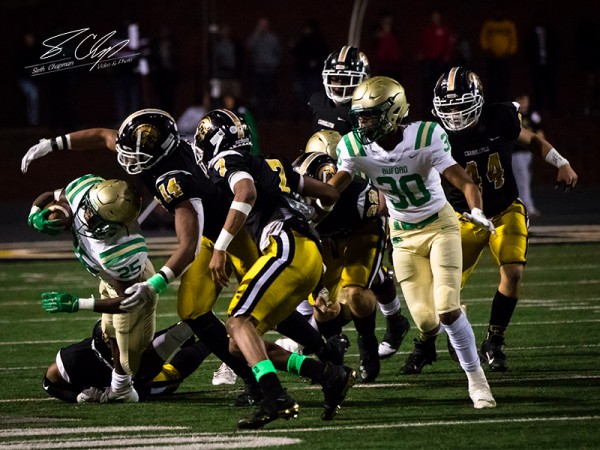 Title trip on the line for Buford at Jones County
The Buford football team faces another long road trip in the Class 5A semifinals tonight.
Friday Game Night

Buford's rushing attack has led the way this season
Sometimes the best defense in football is a punishing, time-consuming rushing attack. For the Buford Wolves, that is exactly what they do.
By Bo Wilson | Video by Seth Chapman

High expectations surround Buford-Warner Robins title game
It's just the common thought in high school football: Buford is supposed to be there.
By Bo Wilson 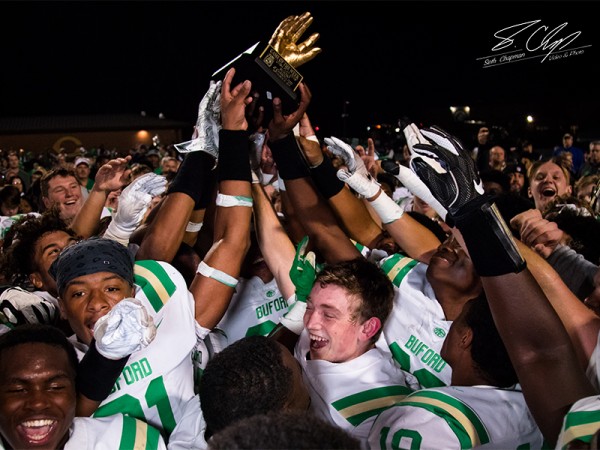 There's one intangible that could give Buford a slight advantage in the 5A title game
Buford has gone through the Class 5A state football playoffs each week with someone other than their opponent expecting them to lose.
By Bo Wilson 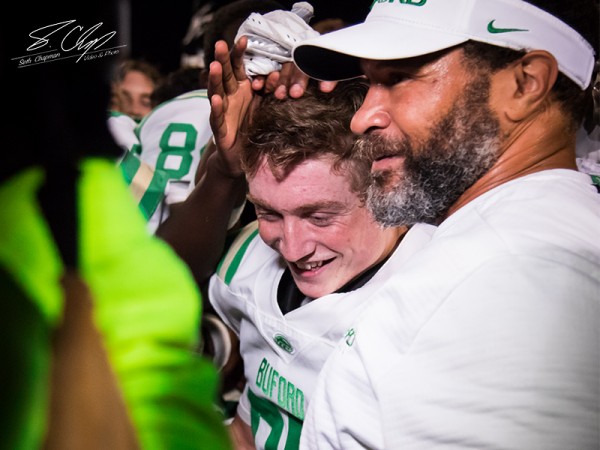 Appling: Wolves' 'good fortunes' dictated by 'preparation'
If there's one thing Buford coach Bryant Appling knows for certain it's that, as the saying goes, “fortune favors the bold.” Or is it “by failing to prepare, you are preparing to fail.” Or is it both?
By Jeff Hart
Privacy | User Agreement | Contact | Advertise With Us
2020 © Jacobs Media Corporation. All rights reserved. EEO Report. Website by Full Media
Login / My Access
close
Search