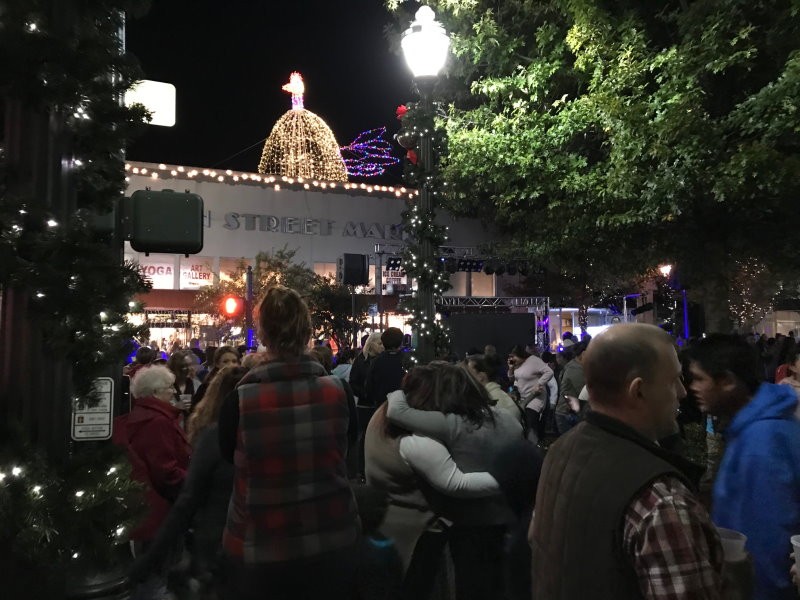 A photo from the brand new Big Chicken lighting in 2017. The old chicken was dismantled and Lanier Tech students created a bigger, better chicken that is still used today.
Alyson Shields
Contact Editor

The annual lighting of the Big Chicken and ensuing festivities on the Gainesville Square before Thanksgiving will continue this year, with a few updates.

The first being that it will be on Saturday, November 23 instead of a Thursday like in years past.

"We found that a lot of families wanted to come, and it's hard to come on a school night," said Director of Tourism for the City of Gainesville Robyn Lynch.

To sweeten the date change, Lynch said this is the first year they will have a fireworks display after the Big Chicken is lit.

"It's the first time we've had fireworks downtown so we're really exited about it... it's first time in a really, really long time," said Lynch.

Lynch said many of the things Jingle Mingle is known for will be the same, from the carriage rides to the kiddie train, as well as the special deals and extended hours at stores along the Square. Musical acts will still preface the chicken lighting, and this year will feature local celebrity and The Voice contestant Andrew Jannakos.

Plus, Lynch said there will be some new and returning favorite characters. "We're adding the Coca Cola Polar Bear, he'll be joining us for the first time this year," said Lynch. "And of course, as always, we'll have Santa with us."

The streets of the Square are closed during Jingle Mingle, so Square hoppers will need to find other places to park than around the circle. Lynch encouraged attendees to try the two new levels on parking deck, or one of the many city lots, such as the Hall County Parking Facility on Green Street, Gainesville City Hall on Jesse Jewell Parkway, Saint Paul United Methodist Church on Washington Street, the Jacobs Building at Brenau University  on Green Street and the Northeast Georgia History Center on Academy Street.

Santa will arrive on a Gainesville City Fire engine at 5 p.m. and the festivities will last until. The lighting of the Big Chicken is scheduled for 7 p.m. A full schedule and more information can be found here.