Not My Family vaping forum focuses on health risks of vaping, how to talk to kids 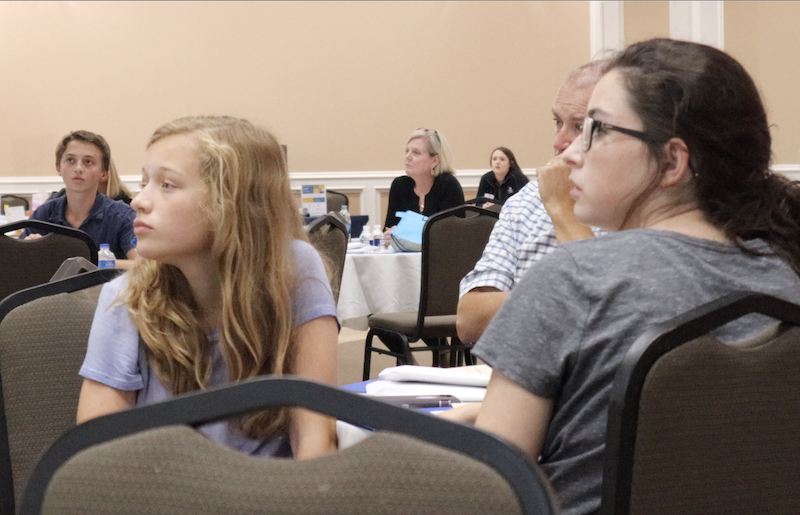 As more and more teens turn to vaping instead of traditional cigarettes, community parents have been wondering not only if their kids are picking up a habit, but if they could be in physical danger.

Stephanie Brown, a Hall County school teacher with three teenage daughters, said she came out to the forum to get some concrete information on the issue.

"I wanted to know more factual information and not just hearsay information, so that I was speaking from facts and not just opinion, and so my children can see and hear firsthand just what vaping can do to them." She said her opinion on vaping didn't change, but she felt like she had facts to support her stance now.

Brown's 18-year-old daughter Kinsley said she had already been exposed to vaping.

"I've tried it, I know a lot of people around me have, and it's just something that's been brought up around my generation," she said. "Everyone does it in my generation."

But, she said the presentation did scare her.

"The biggest thing I didn't know was about the popcorn lung. I didn't know it was a chemical, I thought it was just like the coils being burned," she said. "Another thing I did not know was that people can just buy the cartridges off Amazon. A lot of kids at my school just show off the cartridges at school and during lunch... they think it's the coolest thing in the world, but it's hard to believe they don't know what's really in it."

At the forum, Gainesville Police Chief Jay Parrish and Investigator Bryan Majors talked about what they're seeing on the streets. Many vape cartridge brands use trademarked branding and characters, like candy companies or cartoons, and don't fear repercussions of either copyright infringement or the potential effects of their product on teens.

"The vape pens that we're finding on the streets are in boxes that look like a cereal box," said Parrish. "They have 'Cheerios' written on it, they have 'Lucky Charms' written on it; we saw some that had a knock-off of South Park. And those boxes are targeted, not towards the cigarette smoker to convert to vaping as a safer alternative, but to kids."

Parrish said they're seeing vape pens as more of a gateway drug than marijuana or traditional cigarettes.

University of Georgia Clinical Associate Professor Dr. Merrill Norton explained the medical dangers of vaping. He said the biggest risk is a disease commonly referred to as "popcorn lung," bronchiolitis obliterans, which damages the smallest parts of your airwaves and is irreversible.

Licensed Marriage and Family Counselor Adam Raulerson with Laurelwood explained why it was so important to connect as a family and push past the fear of the unknown with your child's habits and activities.

"In my work with families, we don't ask questions, we don't know what's going on with our youth's lives because we're afraid of what the answer might be," said Raulerson. "Tonight, the focus was on vaping but it could be suicide, it could be heavy drug use, so I've had parents tell me, 'I don't want to know what's going on because I don't know what to do if they say yes.' So what we said is, 'How do we take that fear and think about it differently?' Don't let lie to us, keep us from what we need to do, so we avoid the conflict, let's take that fear and I just took a simple acrostic: Forming Engaged, Authentic Relationships, just to think about it differently."

Raulerson also introduced two communication techniques. One method focus on "I Language" and has the formula "I feel (emotion) when (event) because (thought about event). I want (desired outcome.) The other method was Active Listening, which encouraged parents and kids to pay attention, show you are listening, provide feedback, defer judgment and respond appropriately.

The forum was sponsored by the Partnership for a Drug-Free Hall.