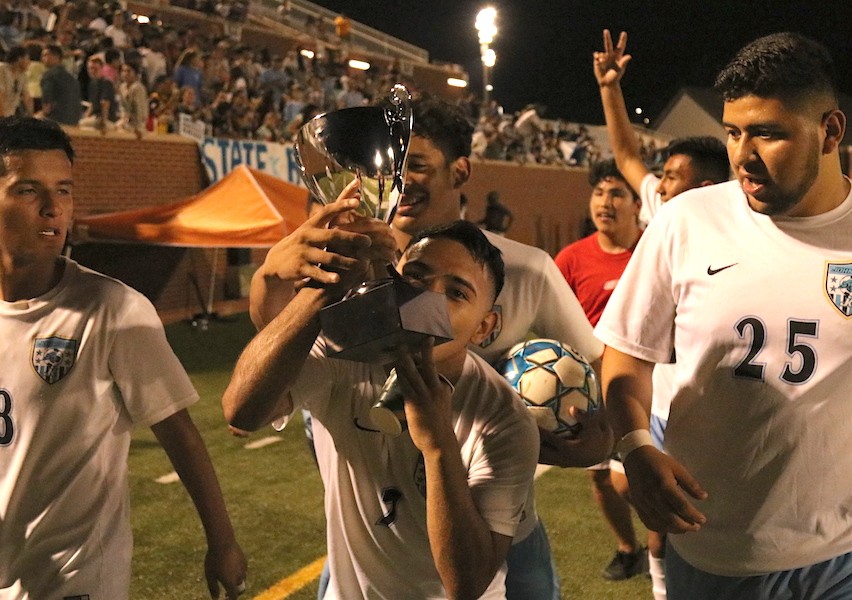 Members of the Johnson boys soccer team celebrate winning the Class 5A state championship on Friday in Macon. The Knights defeated McIntosh 1-0 at Mercer's Five Star Stadium for the program's first ever crown.
photo: Seth Chapman 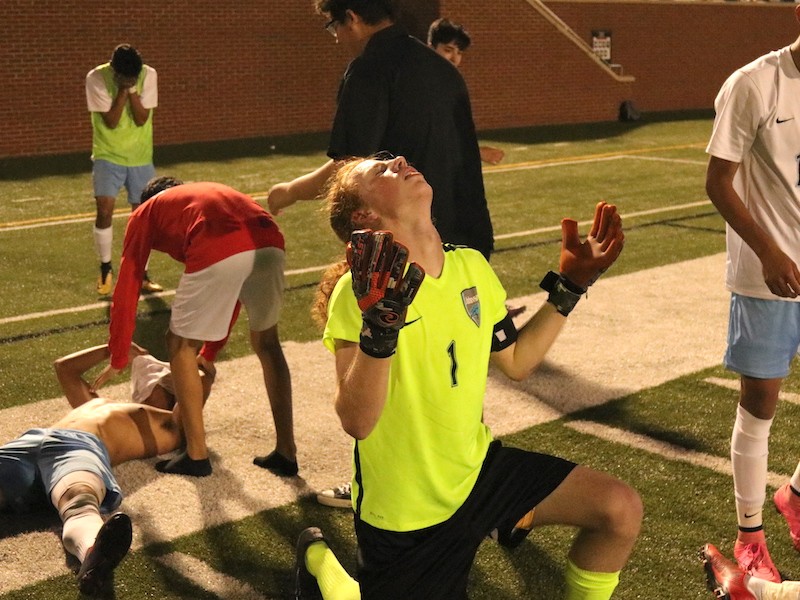 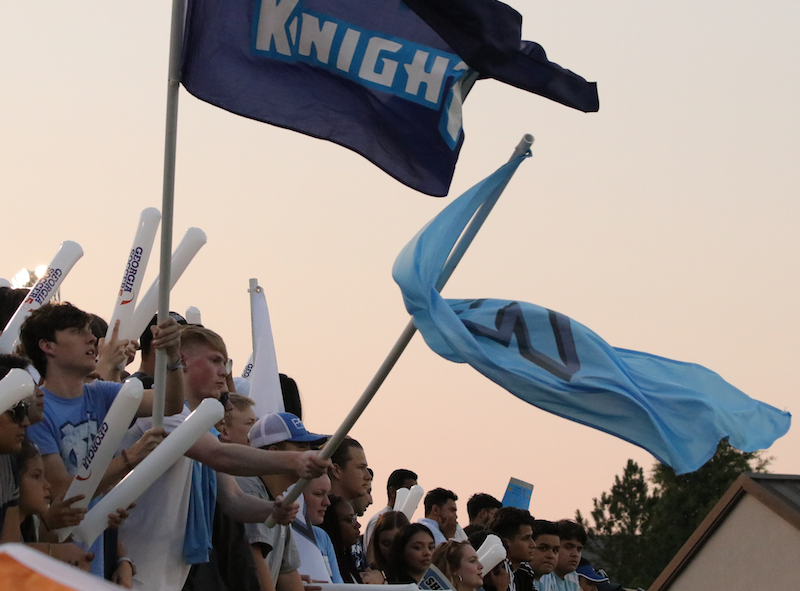 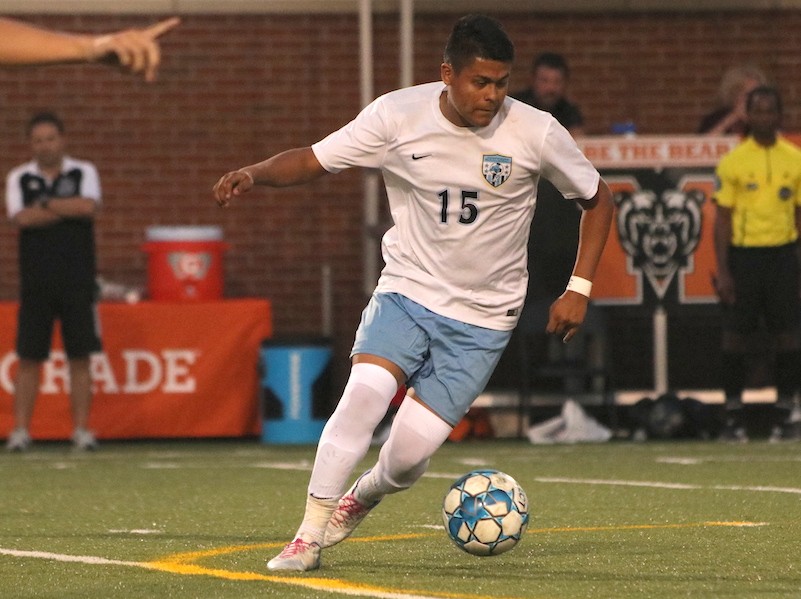 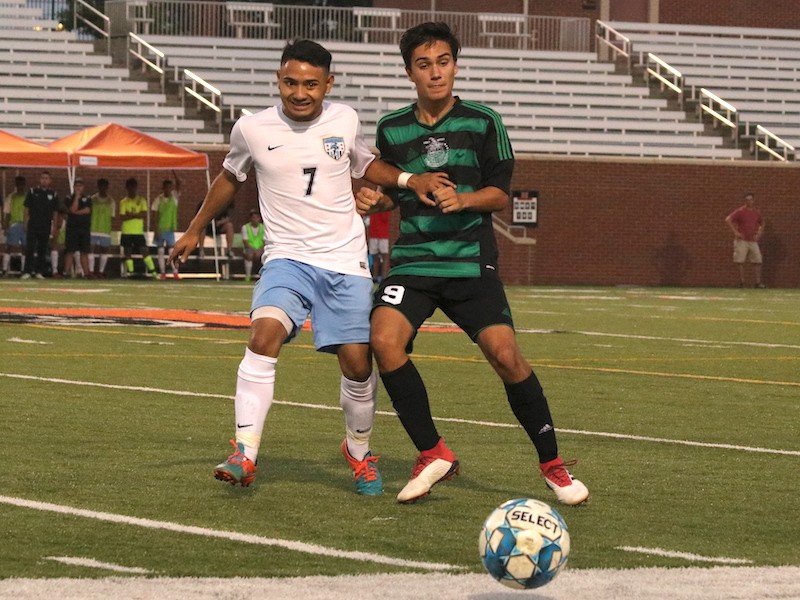 So much so, that he gobbled up everything put in front of him Friday night in the Class 5A boys soccer finals against defending state champion McIntosh.

Bowen made 8 saves, including three incredible acrobatic stops on shots within 5-yards in a 30-second span, to propel the Knights to a heart-stopping 1-0 victory over the Chiefs that captured the program's first-ever state title.

“In a game that was in that deep and that close, I just felt like I had to go for it,” said Bowen, who throw every part of his body at the ball to keep the game scoreless. “To me I was doing my job. Nothing special, really."

It certanly was a special outcome, however -- far better than Johnson's previous title shot in 2016 when the Knights advanced to the class 4A state finals only to be dispatched by St. Pius in a 3-0 loss.

"We wanted this after what happened (two years ago). We felt all season that this was our year," Bowen said. "We were hungy for this."

Following the last of the trio of saves, Bowen started a fastbreak opportunity for the Knights offense that produced a corner kick.

If Bowen, a junior, was the foundation, senior Michael Arcia provided the aesthetics, finding an open space in the Chiefs defense and sliding a low, off-foot shot past McIntosh keeper Jonathan Bennett with 13:44 left for the lone strike of the contest.

“I saw that I wasn’t being marked so I asked for the ball and was able to put a shot past him,” Arcia said. “I’m not right-footed but it was there so I hit it. It was just an incredible feeling when I saw it hit the net.”

After that, the Knights defense thwarted two more McIntosh charges behind unsung heroes like Villanel Albarran and Junior Arellano, who both made goal-saving blocks and pestered the McIntosh attackers the entire game.

It was the fourth shutout of the playoffs for the Knights, who over the years have been known more for their offensive firepower than ability to shut down opponents.

“Cooper was a wall. Villanel was just awesome,” Johnson coach Brian Shirley said. “Our entire defense has just been lights out the entire playoffs. It really started after the Peachtree Ridge game and has been a big focus for us.”

They needed as much defense as they could muster against the likes of McIntosh playmakers Jake Donaldson, Addison Dattilo, and Mason Harris. The Knights, however, never allowed Donaldson an open look, save for on direct kicks, while Harris manufactured just three first-half looks at goal. Dattillo was never a factor as he was forced more to the defensive end during Johnson attacks.

“Our goal was to just keep putting pressure on them and control the possessions,” Shirley said. “I thought we did a great job of that the entire game.”

The Chiefs managed 12 shots for the game but four came in a two-minute sequence and just two more chances after the Knights took the lead. Johnson produced 14 shots but needed to just one to find the net.

In the first half, the Knights controlled the ball for most of the opening 40 minute, though both teams produced chances.

Johnson put some early pressure on the Chiefs with a corner in the 2nd minute but could not generate a shot. Three minutes later Harris embarked on a run down the left side, but his cross into the Johnson penalty area went begging with no teammates in sight.

Johnson earned a direct kick just outside the box in the 15th min but a header on the cross fired just wide right. The Knights got their second corner six minutes later but again could not connect.

One minute later, after a steal in midfield, Albarran charged down the left side, feeding Marco Vazquez for a 15-yard blast that Bennett corralled to keep the game deadlocked.

The Chiefs' best chances came during a seven-minute stretch. On a direct kick Donaldson chipped a ball from 40 yards that Harris slid wide left on a header in the 25th min. On another direct kick five minutes later a Donaldson blast from 35 yards sailed high.

Two minutes after that the Knights’ Arellano made a tremendous block on a Baba Agbaje blast inside to thwart a wide-open attempt in the 32nd minute.

Johnson regained control over the final eight minutes. The Knights three times surged deep into Chiefs territory but could not get clean looks. Then Vazquez displayed deft touch in finding Rigo Campa inside the area, but Campa pushed his shot high in the 38th minute. Albarran then swiped another a steal, and his blast from 25 yards in the waning seconds was stopped by Bennett as the teams went to the half in a scoreless tie.

In the second half, a Arcia direct kick attempt from 20-yards just missed the top left corner.  After a rare Johnson defensive miscue, a Harris blast from 15 yards out was stopped by a diving Bowen a minute later.

After another stop, Bowen started a fastbreak that ended with Bennett just getting a piece of a Campa shot from 5 yards. Bowen then smothered a Donaldson free kick from 30 yards in the 53rd minute.

The Knights nearly grabbed the lead two minutes later on a sweet feed from Campa to Arcia, but Arcia’s blast just nicked the crossbar. It was then McIntosh’s turn to try and break the scoreless tie when Luke Giordana looped a 40-yard free kick into the box in the 63rd minute. But Bowen punched the ball out.

But just as the deadlock looked unbreakable, Johnson found the winner.

As the final moments clicked off, Shirley and his staff exchanged hugs while the entire Knights roster rushed across the Five Star Stadium turf in search of the throng of Johnson fans that made the three-hour trek (thanks to brutal Atlanta traffic) to Macon.

“There isn’t a community in the state that deserves this more than this one,” Shirley said. “Just tremendous support. We couldn’t have done it without them.”

“The crowd comes out for every match,” he said. “We wanted this for them as much as us. It feels great to give it to them. But I’m still a little speechless.”

His, and the rest of the Knights’ play, however, said it all. 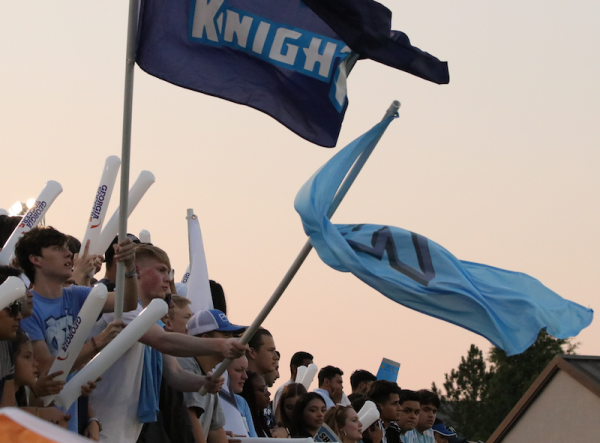 STATE CHAMPS: Johnson boys soccer breaks through to claim first ever crown
In a two minute sequence keeper Cooper Bowen made three acrobatic saves and Michael Arcia trickled in an off-foot shot for a goal to propel Johnson to a nail-biting 1-0 win over McIntosh to capture the Class 5A championship Friday night at Mercer’s Five Star Stadium... 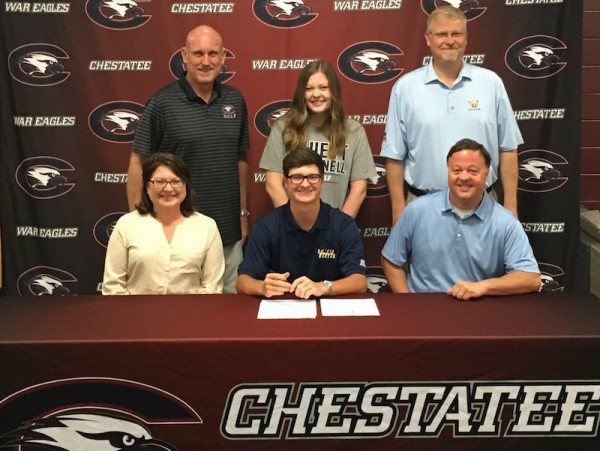 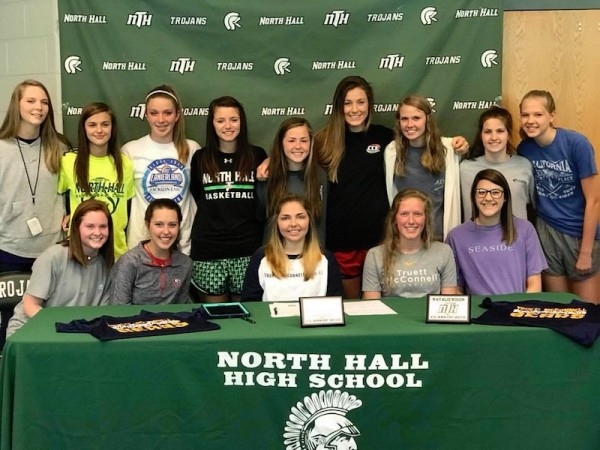 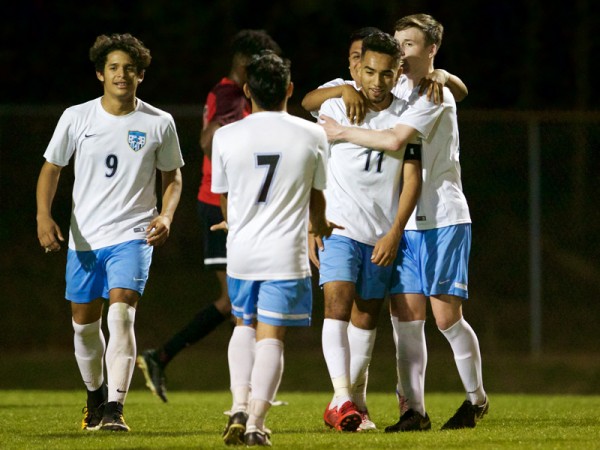 Playoff soccer: Johnson looking to knock door down and grab first title
Johnson soccer senior Josh Elizalde was speaking for himself on Thursday, but it was obvious from the nods of approval and determined faces of his teammates that it was a sentiment shared by the entire Knights locker room...
By Morgan Lee 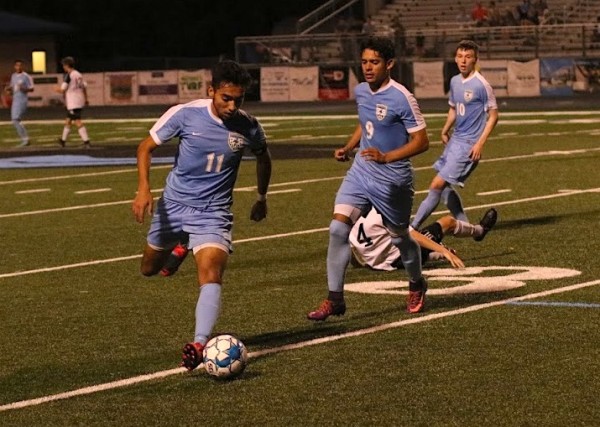 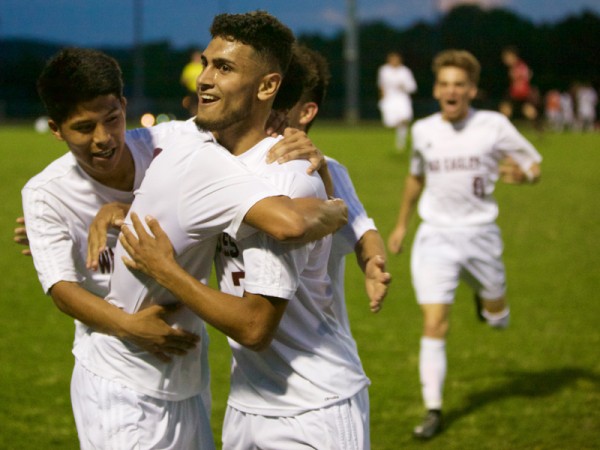 Playoff soccer: Chestatee advances to first-ever 4A final
The Chestatee boys soccer team continued its historic playoff run Tuesday with a 2-0 victory over Upson-Lee in the semifinals of the Class 4A playoffs...
By AccessWDUN 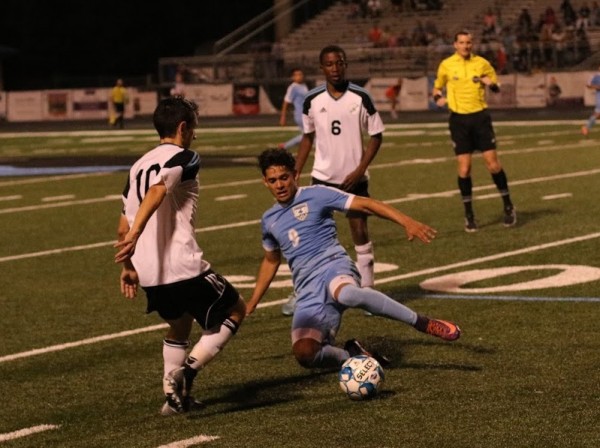 (VIDEO) Playoff soccer: Johnson boys surge back into Class 5A championship game
The Johnson boys soccer team has spent almost two full seasons chasing the one that got away.
By Morgan Lee