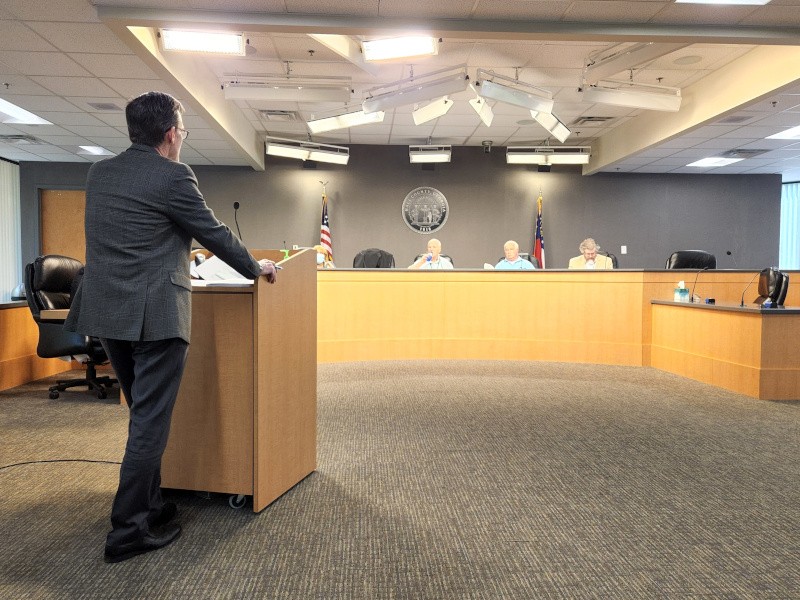 Ken Jarrard presents his legal opinion to the Hall County Board of Elections on April 19, 2022, regarding a piece of proposed local legislation from the Hall County Commission.
Photo: Austin J. Eller
Contact Editor

The presentation from attorney Ken Jarrard of Jarrard and Davis, LLP, came several months after the Hall County Commission submitted a piece of proposed local legislation that would alter how Hall County elections board members are chosen.

Hall County Attorney Van Stephens said in a December 2021 Board of Elections meeting that a 2018 Georgia Supreme Court ruling made the board's current selection process unconstitutional.

The proposed legislation would require both the local Democratic and Republican parties to nominate seven people to serve on the board. The county commission would then choose two from each list. Commissioners would continue to appoint the chairman.

Currently, the two political parties name two people to the board and the commission appoints the chairman.

Jarrard said Tuesday many other local election boards across Georgia use the same selection process that Hall County currently uses. The State of Georgia Board of Elections uses a similar selection process, according to Jarrard.

"If in fact, that method is unconstitutional, then the issue is much bigger than Hall County," Jarrard said.

Jarrard said the recently passed SB202 contained the makeup of the state election board, a makeup that was not changed by the Georgia General Assembly.

"It is a statewide issue, and needs to be addressed at the statewide level," Jarrard said. "I do not believe the local legislation that is being advanced will cure it."

Hall County Board of Elections Chairman Tom Smiley said that while there has been a fear that the elections board could be sued over their selection process, he believes they could still be sued under the changes in the local legislation.

"We continue to operate exactly as we were commissioned to operate in 2014 by our enabling legislation," Smiley said. "We have some time to decide what we're going to do. I suppose that's where we stand now. I think it's best for us just to take some time to digest this, to discuss it further, to be prepared in the coming months."