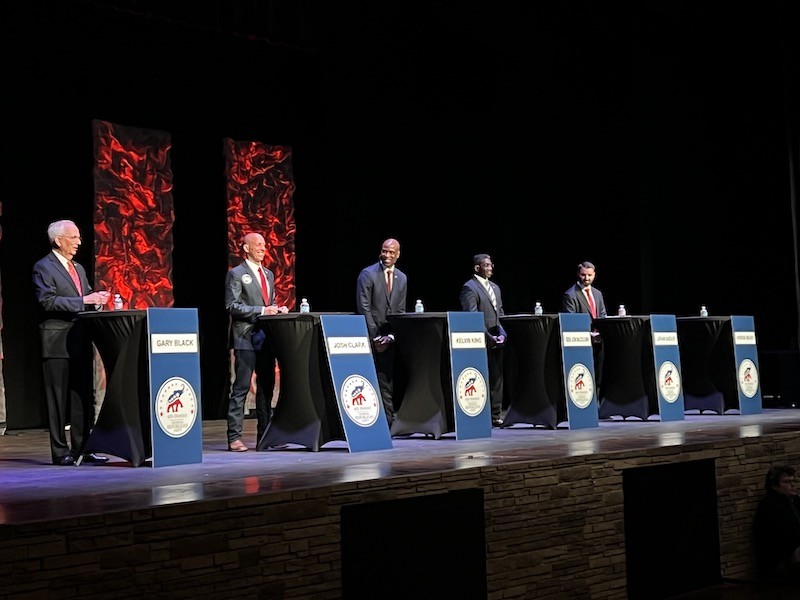 BRASELTON—With questions on topics from foreign policy to the 2020 election, GOP candidates avoided confrontations with one another during Saturday's event. Instead, they saved their sharpest barbs for the frontrunner who didn't show up.

"There's an obvious vacancy tonight. I wish Herschel was here, but he is not," Georgia Agriculture Commissioner and Senate candidate Gary Black said. "I'm certain that every coach that he had in the past instructed him that you will not play in the game if you don't show up to practice. These coaches now have him locked in the basement of the locker room."

Another GOP Candidate, Latham Saddler, took a swipe at Walker, who was supposed to be at the podium next to his. "I thought he [Herschel] was a competitor," Saddler said. "He's hiding out; he's doing the Biden basement strategy."

On the issue of foreign affairs, the candidates expressed their displeasure with the Biden administration's policies.

"We have a president who isn't leading. And as a result, we have lives that are being lost every single day," said Josh Clark. "We have emboldened Vladimir Putin."

GOP candidate Kelvin King argued the Ukrainian response is just another in a series of foreign policy blunders on President Biden's watch. "When we pulled out of Afghanistan, essentially, with our tail tucked between our legs, leaving equipment and 13 dead soldiers," King told the audience.

Former Brigadier General Jon McColumn described a military response as "too risky" because "the current administration has failed," which means diplomacy is the only measure. "We've got to go ahead and continue to support the Ukrainians, and they deserve our support," McColumn explained. He added that the U.S. must continue to support its allies in Europe.

On the 2020 election, none of the candidates expressed complete faith and trust in the results.

"I know we had a mess here in Georgia. I know we had inconsistencies. I hope that inconsistency can be proven," Gary Black told the crowd. "If the laws were broken, people will go to jail."

Former State legislator Josh Clark said the election was lost due to "ballot harvesting." He also called for the passage of a law to only allow citizens to vote. A recent review by the secretary of state's office found that no noncitizens voted in Georgia.

All of the candidates were united in urging Republican voters not to stay home. Kelvin King said GOP voters "got a little emotional," and because of that, "January did not go in our favor." There was a drop-off in the size of GOP turnout for the January senate runoff.

Latham Saddler said the election reforms passed by the general assembly addressed concerns but added, "we've got to have a strategy to win."

You can watch the full debate here.

The results of the post-debate straw poll: