Baseball: Trojans take series from Bluff, stay unbeaten in 7-3A 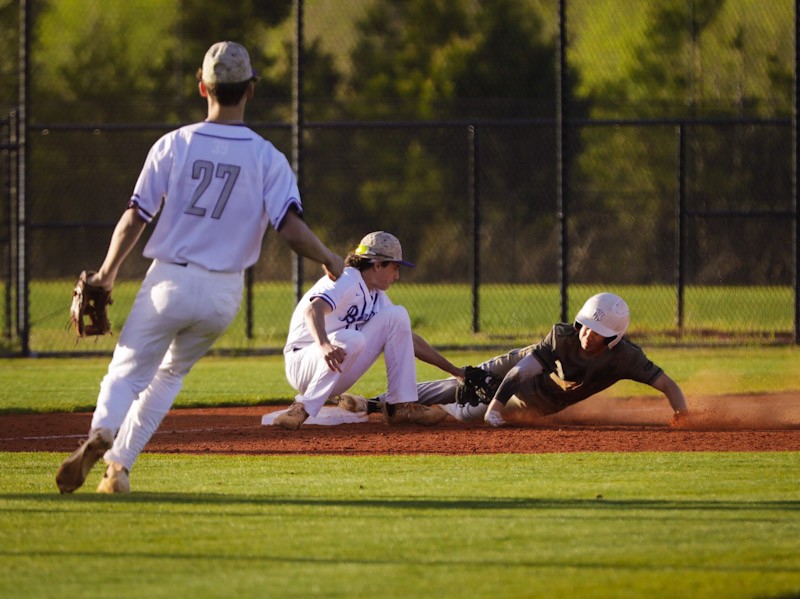 North Hall's Tate Brooks slides into third in the first inning of the Trojans' 7-4 win over Cherokee Bluff in a key Region 7-3A series win on Thursday.
Contact Editor

FLOWERY BRANCH — Sophomore Ajay Jones provided the offense and senior Baker Dyer the lockdown on the mound as No. 1 North Hall held off No. 7 Cherokee Bluff, 7-4, on Thursday at Bluff Ballpark to capture a key Region 7-3A series.

Jones was 2-for-3 with 3 RBI, including a huge two-run triple in the second, stole two bases, and scored twice. Dyer pitched 3 2/3 innings of near-perfect relief to get the win and shut down a Bears offense that came in averaging 10.6 runs/game in region play.

“That was a huge region win, a huge series win for us going into the next (series),” North Hall coach Trevor Flow said.

The win gave the Trojans (19-4, 14-0 Region 7-3A) the series win over the second-place Bears (17-6, 10-4 Region 7-3A) and a four-game lead with seven region games left. The two teams will close out their three-game series on Friday at Cottrell Field.

Bluff dropped into a tie for second place with Dawson County (15-8, 10-4 Region 7-3A) but the Bears own the head-to-head tiebreaker over the Tigers.

“Hunter didn’t have his best stuff but he competed. Baker really seemed to have his way out there and just shut the door. We really needed that,” Flow said. “Ajay has another level of speed and he had a couple of big hits and gave us a spark at the plate. The guys really competed.”

Until Dyer arrived in the fourth, both offenses were having their way with both starters.

North Hall jumped on Bears’ starter Tucker Holton for a quick run in the first. Holton hit Tate Brooks to open the game and Brooks later came around to score on a RBI groundout from Jace Bowen.

The Trojans added three more in the second with some help. Luke Erickson singled to lead off and scored on a double to right by Jon Jon Read that right fielder Brett House never saw and lost in the sun. Jones then knocked in two runs on a bad-hop triple over second and he scored on a bloop double by Bowen just in front of a diving Ty Corbin in center for a 5-0 lead.

Bluff responded in the bottom of the second. House, a Mississippi State-commit, belted a two-run home run and the Bears got two more on an errant pickoff throw from Brooks to pull within 5-4.

The Bears loaded the bases again in the third on three consecutive walks by Brooks. But Brooks fanned Lucas Tritt and picked House off first to get out of the huge mess.

North Hall answered that with an unearned run in top of the fourth on a RBI single from Jones to make it 6-4. The Trojans pushed the lead to 7-4 in the seventh on a RBI single by Jaret Bales after Jones reached on an error and stole second and third.

After a walk to Landon Kemp, Brooks was replaced by Dyer, who took control from there. Fittingly, Dyer struck out Bryce England to end the game after two tremendous defensive plays by shortstop Bowen and second baseman Erickson.