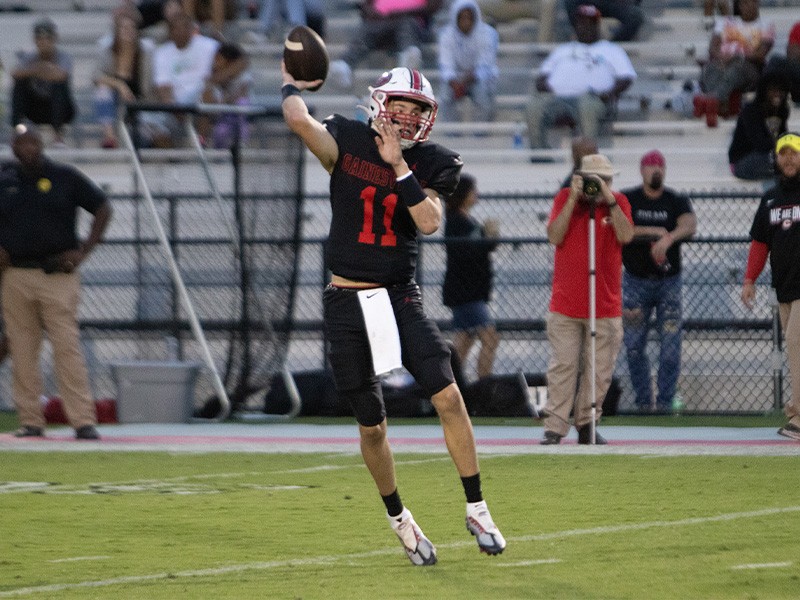 Baxter Wright was 7-of-11 for 104 yards in just one half of work as Gainesville rolled past Jackson County on Friday at City Park. Photo/Seth Chapman, FILE
Contact Editor

GAINESVILLE, Ga. — There would be no letdown after last week’s emotional win to capture the Region 8-6A title.

Gainesville used big play after big play in the opening 24 minutes for a 30-0 halftime lead en route to a stunning 51-0 win over Jackson County to close out the 2022 regular season at City Park Stadium Friday night.

“Our first drive wasn’t great, but then we started scoring in bunches and got some momentum with some stops. Just proud of the kids,” Gainesville coach Josh Niblett said.

One play after blocking a Jackson County punt, Naim Cheeks raced 48 yards for a score. Wright followed with a 49-yard keeper for a touchdown, and Wright connected with Tre Reece for a 9-yard TD pass with just 26 seconds left for the big lead at intermission.

The Panthers came in giving up just 19.6 points/per game on the season. The 51 points allowed was a season-high.

The little things that seemed to plague the Red Elephants during the season -- untimely penalties, special teams miscues, offensive lulls -- were no problem this time as they seemed locked in on all phases. They had just four penalties against the Panthers after 15 last week against North Forsyth. They got the blocked punt and connected on all five PATs, and allowed just two kick returns on special teams.

“Our guys are excited because they’ll get biscuits or donuts or something,” Niblett said. “Just a great team effort all around. It may have been our first game of playing four full quarters all season.”

“It’s hard to go undefeated (in the regular season),” Niblett said. “These kids have done a lot to get this point, and to go down as one of the undefeated teams is special, so we want to enjoy this for a little bit.”

Gainesville will play host to Sprayberry next week at City Park in the first round of the playoffs. The Yellow Jackets (4-6) routed Pope 56-0 on Friday in a game that decided the fourth seed out of Region 7-6A.

“We haven’t really looked ahead. We’ve just been focused on this week and getting through this one,” he said. “We’ll start breaking film down in a couple of days.”

Meanwhile, the Gainesville defense never let the Panthers (3-7, 2-4 Region 8-6A) get untracked on offense. They held Jackson County to just 156 total yards, with M.J. Spurlin managing just 50 on the ground.

Gainesville picked up right where it left off when Darius Cannon returned the second-half kickoff 63 yards to the Panthers' 32. Marquis Ross then busted up the middle on consecutive runs of 10, 11, and 11 yards, the final one giving the Red Elephants a 37-0 lead just 41 seconds into the third quarter.

After Jackson County’s seventh punt of the game, the Gainesville reserves got in on the act as Kylan Hall ran for a pair of scores and 95 yards.