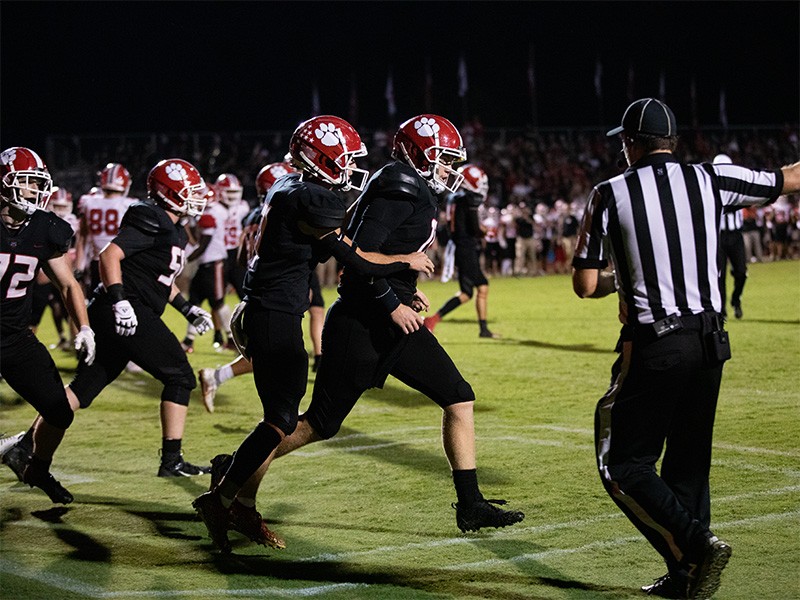 TIGER, Ga. — Rabun County took a 27-20 lead midway through the fourth quarter and held on for a 27-22 win Friday night over Commerce to capture the region 8-1A Division I title.

The Wildcats quickly scored on their first offensive play as Keegan Stover found Jaden Gibson for a 58-yard passing score to put Rabun up early. Commerce settled down, scoring on a Jaiden Daniels 55-yard run early in the second quarter to tie the game before Daniels scored again four minutes later to give Commerce the 14-7 lead.

Rabun answered with 5:57 to play before halftime on a Lang Windham 2-yard run to tke the game going into the break. Stover gave Rabun the lead on the opening drive of the second half with a 1-yard rushing score to push the score to 21-14.

Again, the Tigers settled in and allowed Daniels to find the endzone with 11:50 to play, but the point after try was blocked, giving Rabun a 21-20 lead. The Wildcats scored with 6:34 to play as Stover found Jarret Giles, but the ensuing PAT was blocked, giving Commerce a chance to tie the game. Rabun County's defense held, and, despite a safety at the buzzer, Rabun County earned the region championship.

Stover threw for 241 yards on the night, finding seven different receivers. Daniels ran for 176 yards on 40 carries to lead the Tigers.

Both teams will now ready themselves for the state playoffs as they have the final week of the regular season off.

Walker McCrary Sports Reporter
More Articles From Walker »
© Copyright 2023 AccessWDUN.com
All rights reserved. This material may not be published, broadcast, rewritten, or redistributed without permission.