Game of the Week: Excitement returns as Flowery Branch, Gainesville are set to battle 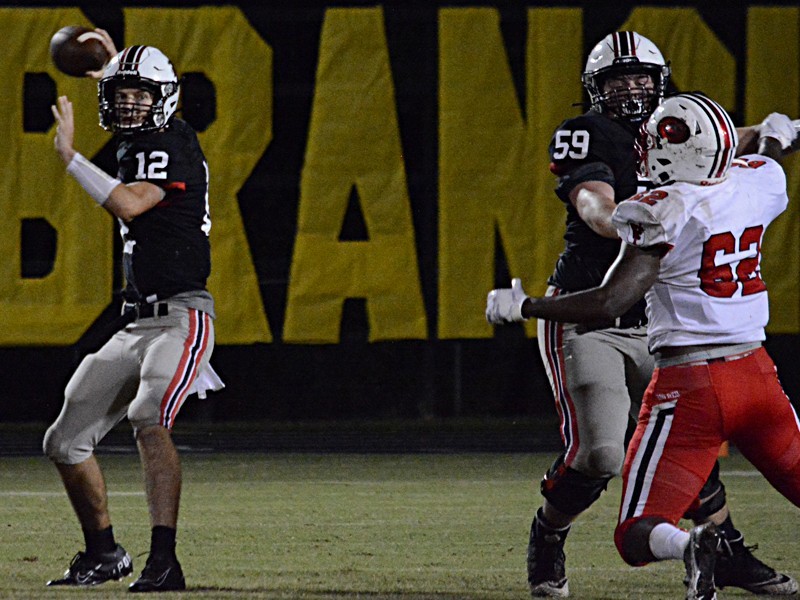 If the history of this series wasn't enough before the originally scheduled date of the Flowery Branch-Gainesville game last week, it just became a bit more historic before the ball is kicked off.

Last Wednesday, the game was canceled. Flowery Branch announced it had COVID-19 cases inside the program and would be shutting down until Tuesday. On Friday, Sept. 3, the game was back on the slate for Week 4.

Ironically, both were scheduled to be off, making it much easier to reschedule. It's evident when you talk to both coaches that finding a way to play Hall County's more current heated rivalry was important to the community. With that, kickoff is set for 7:30 p.m. at Bobby Gruhn Field at City Park, and you can hear it live on AM 550 WDUN.

And Gainesville coach Heath Webb is excited to get this game back.

"I didn't get to tell the players face-to-face," Webb said. "I had to send a group text, but several guys hit me up excited to play."

Of course, at that point, the Red Elephants were just happy to find an opponent for this week. If the two rivals couldn't play, the 2021 game was null and void.

"It got to a point where it wasn't about playing Flowery Branch," Webb said. "It was about playing a game. Our players didn't care who it was, there were just happy to have a game."

But since it's the Flowery Branch-Gainesville rivalry, everybody's smile got a lot bigger.

Branch coach Ben Hall was just as excited to get this game back on the schedule. He said it needed to be played.

"We're really excited," Hall said. "As a coach or staff member, you don't realize how much each and every game matters to the kids. When we had to postpone the game, we had cheerleaders crying in the cafeteria and band members upset they weren't going to get to play Gainesville. This game needs to be played. You know, there are challenges each and every week, but it was the right time for us to slow down last week. Due to having a shared bye week, it was just too convenient not to postpone the game for a week."

This series, after the formative years of the series, has been neck-and-neck. As a matter of fact, since 2009's down-to-the-wire Class 3A semifinal battle (WATCH THE FEATURE ON THAT GAME HERE), however, the series is tied 4-4. Flowery Branch can match Gainesville's longest win streak of four games (2002-2005) with a win this week as the Falcons bring their three-game winning streak to City Park.

"Obviously, you would like to win every game you play," Hall said. "We're going to prepare to win the ballgame, but as far as streaks, I don't think about that. I guess some people do, but our kids that are sophomores, juniors just know what you've done over the last two years. I don't think streaks in a series matter much to the kids. I think they're going to prepare and play hard to win the game."

Although the only thing on the line this week is bragging rights -- no region titles or state finals berth to play for -- two of Hall County's best programs are just fine playing for pride.

"I think for us, it's the local rival that we have," Webb said. "You factor in, there are always good football players on both sides and the proximity helps, of course. They know each other and want some bragging rights. You lose to Chattahoochee, and you never have to see those guys again. But this one, you run into them in the community. That means they compete their tails off against each other, and that makes it a lot of fun. The bottom line is you have two good football teams that compete like mad, and that makes for good football."

Hall agreed with Webb, saying he expects the 17th meeting to be a battle.

"I think both teams play really hard," Hall said. "Due to the proximity and the relationships on each team, the kids know each other and have played against one another since they've started playing the game if they've been in this area. There's a lot of emotions, energy and effort. Anytime you have two teams that play hard, it's going to be a battle."

The mid-week cancellation didn't affect either program too much. For Gainesville, they continued with practice just like any week. Webb said his program kind of hit the reset button on Sunday.

"We continued as normal last week," Webb said. "We played best on best football on Wednesday and had our normal special teams practice on Thursday. It wasn't that big of a deal, because we kind of got to hit reset and will do it all over again this week. We came back in on Sunday and starter over as nothing ever happened."

For Flowery Branch, they got a practice in on Wednesday morning, then shut everything down until Tuesday.

"When you stop, it affects your rhythm, so we go back out there this week to find out where we were," Hall said about the shutdown. "We feel like we have a mature group, and they're going to be able to overcome a little adversity and be excited to play Friday night."

Gainesville has steadily improved since Game 1 -- a 26-10 loss to Johns Creek. It was the first game for sophomore quarterback Baxter Wright and a total revamped offense, led by offensive coordinator Chad Bennett. It was very evident the Red Elephants needed to find a way to finish drives. Those ways, of course, were eliminating the mental and physical mistakes on the field in the red zone. Gainesville had five trips inside the Gladiators territory and only put 10 points on the board.

"We have continued to improve and need to keep going in that direction," Webb said. "We made enough mistakes against Johns Creek to last us three ball games. But a lot of our guys grew up against Johns Creek on both sides of the ball. Offensively, against Johns Creek, we didn't finish drives, but we made some corrections, and the next week, we finished drives. To see the progress from Game 1 to Game 2, all the things that were a concern in the first game got cleaned up in the second one. So, the natural progression is going well."

Flowery Branch has followed kind of the same path as far as game-to-game improvement. After giving up 14 points to St. Pius in the first half, the Falcons have allowed just seven points in the last six quarters en route to a 21-14 win over the Golden Lions and a 31-7 win over Dawson County.

"I know defensively, we're a year older," Hall said about his team's improvement. "Those kids and coaches are working hard, making adjustments to make sure people are in the right positions. It's fun to watch those guys improve from week to week and grow up. Offensively, every team is trying to find an identity and find out what they can do. I think that's a big part of coaching, just getting your players in the right position and play hard."

The Falcons led most of the 2020 meeting until late in the fourth quarter when Gainesville grabbed its first lead, scoring on a 16-yard pass from Gionni Williams to Samaj Brown. The two connected again just seconds later for a successful two-point conversion to take the lead, 22-21.

But, with their backs against the wall, the Falcons executed their two-minute offense to perfection thanks to quarterback David Renard. Renard led the Falcons on a seven-play, 74-yard drive, connecting on 4-of-7 passes for 69 yards and the eventual game-winning touchdown. Renard dropped in a 27-yard pass to his tight end Sal Sengson, who caught the ball, spun away from two Red Elephants and hit paydirt to win the game.

Webb spoke fondly of Renard and said the keys to the game this year will come down to eliminating the big play and turnovers.

"I don't know if it's any different than any year we play them," Webb said. "They do what that do and do it well. David Renard, I'll be honest, I'm a fan. He's a very good football player. Anytime that guy is out there on the field, with the ball in his hands, they've got a chance. I just have a tremendous amount of respect for him as a player.

"We can't turn it over. We've got to make sure we take care of the football and have no mistakes in special teams. Then prevent the big play. That's what got us last year. We've got to protect against that."

As for Hall, he noted turnovers and enduring Gainesville's ability to go downfield quickly.

"This game will come down to turnovers," Hall said. "We have to avoid turnovers and endure an early flurry from Gainesville. It seems like every time we play Gainesville, they come out and play hard extremely early. I'm sure we're going to have negatives that happen early in the game, we're going to have to overcome that and work to make it a four-quarter game to give ourselves a chance to win in the fourth quarter."