5 Things: What we learned from Week 2 of high school football 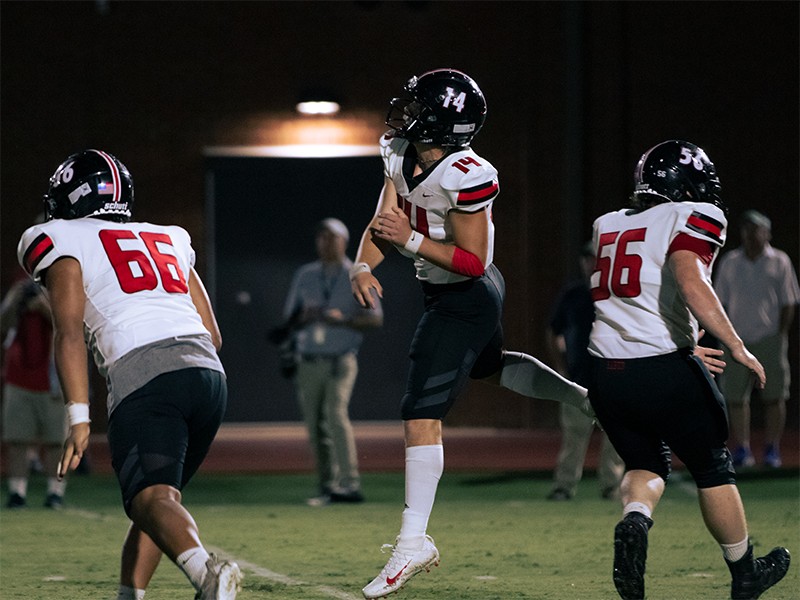 There was more lightning and a Saturday contest to stretch out Week 2 of the high school football season, but there were still lessons to be learned all the same.

Here are five things we learned over the weekend:

If there were any concerns about the state of the Rabun County Wildcats after a season-opening loss at Class 4A's preseason number-one ranked Jefferson, it's probably safe to put those back on the shelf for now. After scoring just 13 points in that opener, Georgia-commit quarterback Gunner Stockton directed the Wildcats offense to perfection en route to a 47-14 blowout of Pace Academy in a nationally televised contest Saturday evening in Tiger. It was a career night for Stockton, which is saying something. He threw 6 touchdown passes, ran for another and racked up 300 yards passing in the first half alone, spreading the ball to a wealth of receivers. It was also a coming-out party of sorts for receiver Jaden Gibson, who was playing in just his second game with Rabun County after transferring in this offseason. He totaled 184 receiving yards and three touchdowns on just five catches. Head coach Jaybo Shaw made sure his team will face the stiffest competition a non-region schedule can garner them, as the Wildcats will now travel to face Class 1A-Private powerhouse Eagle's Landing Christian this week. Another loss or two is certainly possible given the difficulty of Rabun County's schedule, but their eyes are fixed on a prize farther down the road. Saturday night served as a reminder to those who needed it that this team is still going to be a top contender in Class 2A.

2. West Hall has defense, running game to make noise in 7-3A

The West Hall Spartans are 2-0 for the first time since 2014. That season, they captured the program's only region championship. While it's likely too early to tell if that history will repeat itself, this year's West Hall team is certainly building plenty of confidence in the early part of the season. In a 48-21 win over East Hall Friday night, the Spartans flexed some muscles defensively, holding in check a Vikings offense led by one of the top passers in Class 4A from 2020 in senior quarterback Clete Cooper. East Hall was only able to score two offensive touchdowns in the game. On the other side of the ball, West Hall's ground-and-pound approach wore down East Hall over the course of the game, on its way to 518 yards of total offense. Region 7-3A is once again expected to be a wide-open race, with defending champion Cherokee Bluff likely returning as one of the front-runners and North Hall and White County expected to contend as well. It may be time to start including West Hall in that conversation as they continue to improve. Just two years ago the Spartans finished 0-10, but leaped up to 4-6 last year, just one game shy of making the playoffs for the first time since 2017. That goal and possibly more are looking well within their reach right now.

3. Gainesville's offense may have found its rhythm

Gainesville entered the 2021 season with some new cogs in its offensive machine in its fourth year under head coach Heath Webb. Not only did the Red Elephants bring in a new offensive coordinator in Chad Bennett from White County, but they also feature sophomore quarterback Baxter Wright, who was making his debut as the team's full-time starter. The opener against Johns Creek showed some promising drives but overall left a sour taste in the team's mouth along with a 26-10 loss. They got that taste out of their mouths and put together one of the best offensive performances the program has seen in recent memory Friday night as they exploded for 30 first-quarter points on their way to a 44-0 shutout of Chattahoochee. Much of the early scoring was done by junior running back Naim Cheeks, who scored three touchdowns on just five carries total in the game. He finished with 65 yards rushing. Wright, meanwhile, turned in a more than serviceable performance, going 11-of-13 for 165 yards and two touchdowns. The Red Elephants hit big plays as well, scoring three touchdowns in that first quarter on plays of 30 yards or more. They may have found that rhythm just in time, as they now get ready for their biggest game of the non-region slate in the annual rivalry matchup with Flowery Branch. Gainesville has averaged just 20 points per game against the Falcons over the last three years, all three ending in losses. The offense may be the key if they hope to snap that streak this year.

4. Buford defense shows it can win games too

Much of the talk about this year's Buford team has centered around its bevy of offensive weapons. With two more-than-capable quarterbacks in Ashton Daniels and Dylan Wittke and two Division-I commits each at both running back and wide receiver in Victor Venn, C.J. Clinkscales, Isaiah Bond and Jake Pope respectively, that talk was certainly not for nothing. Friday night provided a very different script, however, as the touted Wolves' offense struggled in a road matchup with Clarke Central. Buford scored just 10 points offensively, but still clung to a one-touchdown lead late in the game thanks to a phenomenal defensive performance. The Wolves held the Gladiators to just 78 yards of offense, a number that seems almost impossible in the modern era of football. The defense even outscored Clarke Central, allowing just one field goal and scoring a touchdown of their own on the final play with a pick-six by the aforementioned Pope to seal a 16-3 win. Buford was no doubt happy to get out of Billy Henderson Memorial Stadium with a win after their last trip to Athens in 2019 ended in a region championship game loss to the Gladiators. While they're likely not happy with the offensive output, they can leave the game with confidence that their defense is more than capable of delivering them wins if the offense were to struggle again down the road.

5. Bruce Miller era at Lanier Christian Academy off to an explosive start

Lanier Christian Academy has had some success in the GAPPS over the years, but nothing quite like what they've already experienced in just two weeks under new head coach Bruce Miller. Anyone familiar with football in North Georgia over the last two decades likely saw it coming. Miller is one of the winningest head coaches in the history of the area, having guided Gainesville to its lone state title and one of the most successful eras in its history. He also took North Forsyth to the state semifinals in 2001. Lanier Christian was able to lure him out of his semi-retirement, and it is already paying off. The Lightning are 2-0 and have won their first two games of the year by a combined 98-0 margin, including a 30-0 shutout of LaFayette Christian Friday night. They also have some promising young talent in sophomore quarterback Walker Anderson and freshman running back Zeke Clanton. If Miller and his team can continue this success, it may mean bigger things down the line for the young program. Lanier Christian still plays in the GAPPS 8-man league due to low roster numbers, but increased success may be just what the doctor ordered to get the program's participation numbers up.