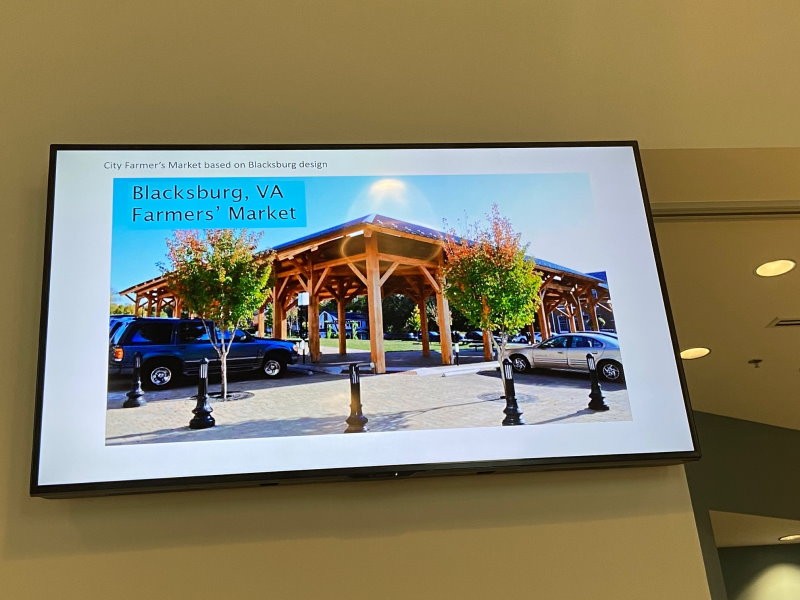 A farmer's market in Virginia that was shown to the Flowery Branch City Council Thursday as a possible template for a proposed market in the city.
Photo by Caleb Hutchins
Contact Editor

The Flowery Branch City Council gave first reading approval Thursday to a proposed townhome development in downtown that could help the city create space for a farmer's market.

The proposal from South Hall, LLC would involve a land-swap between them and the city and rezoning three parcels of land on Church Street at Knight Drive from Traditional Neighborhood District to Central Business District. The move would give the city a portion of property closer to Railroad Avenue, which the city is hoping to use for the farmer's market development, while South Hall, LLC would take ownership of a portion of Knight Drive.

On the rezoned property, South Hall LLC is looking to build 14 townhomes, with seven being built on either side of Knight Drive.

Several residents spoke against the proposal at Thursday's meeting, citing density and traffic concerns. Council members also had questions, saying they wanted to see more details on the site plan before a final vote is taken.

City Planning Director Rich Atkinson said the city is hoping to take that final vote as soon as possible so that work could begin on the farmer's market project with possible completion by the end of the year. He said more details would be available before the council's next meeting on June 17.