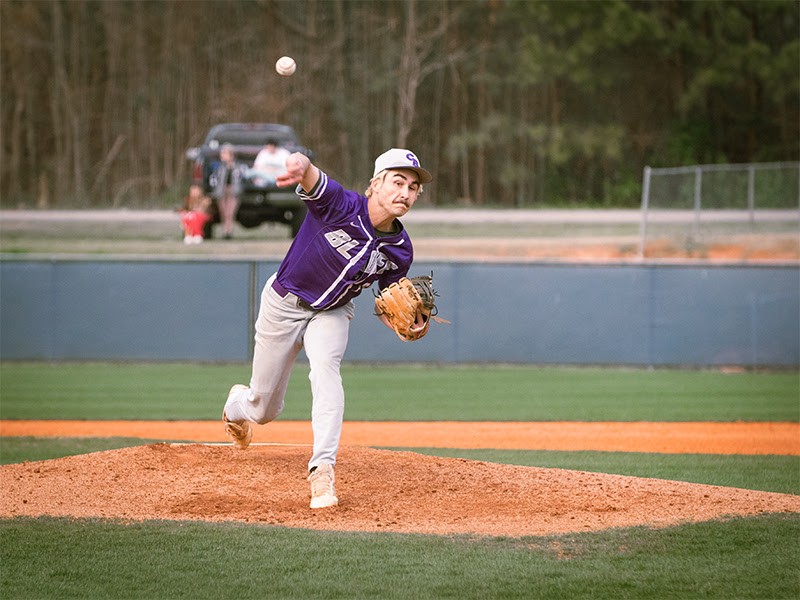 Clay Tyas helped lead Cherokee Bluff into its first-ever Elite 8 round last week. The Bears travel to Appling County on Monday in a Class 3A three-game series with the winner moving on to the semifinals.
Photo/Seth Chapman
Contact Editor

With upsets galore in the second round of the Georgia High School Association baseball playoffs, just three northeast Georgia area teams are left standing as they enter the Elite 8 on Monday.

North Hall and Cherokee Bluff in Class 3A managed to push through, but needed three games to advance. Commerce in Class A Public was the only area team in the second round to produce a sweep.

North Hall, the top-ranked team in Class 3A, still faces a tough road playing host to No. 6 Pierce County in the quarterfinals. Tenth-ranked Cherokee Bluff heads to unranked Appling County as only five of the top 10 teams coming into the playoffs are still alive in Class 3A.

The Trojans and Pierce County are no strangers. The two last met in the 2017 Class 3A state tile series with North Hall winning the championship in a two-game sweep.

"Pierce is a quality program and they always have great players," North Hall coach Trevor Flow said. "I expect a series just like the one we finished. To win the 3A title, you have to beat great teams. Hart County was a great team. Pierce County is a great team.

"And I'm sure they remember the 2017 series so they'll be motivated. It should be a great series."

Commerce also faces a tough road as eight of the top nine ranked teams in Class A Public are still alive. The No. 8 Tigers play host to No. 4 Charlton County.

For Cherokee Bluff, every series win is sending them into uncharted territory. In only their third season coach Jeremy Kemp and staff have guided into their first Elite 8. They are enjoying the ride.

"We are very excited for the opportunity to play (in the Elite8) against a great team like Appling County," Kemp said. "I am proud of these kids and how hard they have worked. It should be a lot of fun!"

But another big story is who didn't make it to the quarterfinals. Buford, the state's -- and the nation's -- top-ranked team was stunned at home by Pope in Game 3 last week. The Greyhounds are a two-time state champion (2017 and 2018) but were considered heavy underdogs.

Also out is Flowery Branch, which was ranked fifth in a tough Class 4A but fell to No. 9 Cedartown in two games. Jefferson was ranked sixth but ran into No. 1 Marist and was swept out in two tough games.

(Check below for the quarterfinal schedule for area teams.)