DAHLONEGA — The No. 27 University of North Georgia baseball team took advantage of the long ball to sweep Salem Saturday on Senior Day.

GAME ONE: UNG 13, SU 3 (7 inn.)
The Nighthawks scratched the scoreboard first in the bottom of the first off a Bill LeRoy sacrifice fly before the home runs started flying in the second. UNG went back-to-back in the frame, getting a two run bomb from Crews Taylor and a Tim Conway solo shot three pitches later.

Nik Levensteins got in on the homer fun in the third with a two run blast of his own to stretch the North Georgia lead to 6-0 before Salem scored for the first time in the fifth on a sacrifice fly. Levensteins responded in the bottom of the fifth with another two run homer to give the Nighthawks a 8-1 lead. In the sixth, UNG went back-to-back again, this time with a two run shot from Andres Perez and Bill LeRoy's solo homer to extend the lead to 11-1.

After Salem scored twice in the seventh, Tim Conway walked the game off with a two RBI double in the bottom of the seventh inning.

Pierce Williams (3-0) earned the win, striking out five across six innings of work.

GAME TWO: UNG 8, SU 0
Perez got North Georgia on the board quickly in the first inning with a solo homer to start the back-to-back combo with LeRoy that gave UNG an early 2-0 lead. After a LeRoy RBI single in the third, Will Hardigree hit his first homer of the day in the fourth, a solo shot that stretched the lead to 4-0. Two batters later, Taylor hit his second long ball of the day on a solo homer to right.

Hardigree homered again in the seventh to plate the final three runs of the game.

Jay Pendley (2-1) went eight innings to secure the win, punching out eight. He retired his final 14 batters after giving up a leadoff single in the fourth.

NOTES
- The six homers in game one is tied for the second most in a single game in program history.

NEXT UP
The two teams will finish off the four-game series tomorrow morning at 11 a.m.

UNG smacks 11 HRs in DH sweep of Salem
The No. 27 University of North Georgia baseball team took advantage of the long ball to sweep Salem Saturday on Senior Day... 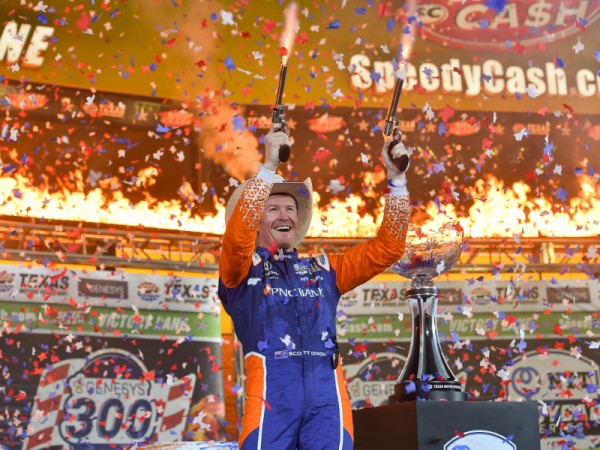 Scott Dixon dominates for IndyCar victory at Texas
Scott Dixon schooled the rest of the Genesys 300 field in an oval-racing clinic Saturday night at Texas Motor Speedway, leading a race-record 206 of 212 laps...
Sports