JEFFERSON  — Jefferson sent 12 men to the plate in a six-run first inning en route to a 10-0 win in six innings over Madison County on Wednesday in Region 8-4A play.

The Class 4A sixth-ranked Dragons (7-4, 2-0 Region 8-4A) also remained atop the region standings with the win.

In the big first inning, Nick Sellers led off the game with a solo home run. Mason Cooper and Jake Walker followed with RBI hits and Cole Watkins added a bases-loaded walk for an RBI as well.

Watkins later added a two-run double in the third. Jefferson put the game away in the sixth with two runs on RBI hits from J.J. Rapp and Matthew Perrin.

Landon Richards went the distance for the Dragons scattering three hits and one walk while striking out 6 in six innings.

The two teams will close out their three-game series on Friday in Danielsville.

Chestatee battled Class 4A’s No. 1 ranked Titans but could not hold a 5-1 lead as North Oconee rallied for the Region 8-4A win.

The War Eagles  (6-6, 0-2 Region 8-4A) started strong getting a run in the first on an RBI hit from Nolan Turner and added two more runs in the second on an RBI single from Joshua Bull and scoring on a Titans error.

North Oconee (11-1, 2-0 Region 8-4A) got its first run in the third on a solo home run from Bubba Chandler. Chestatee pushed its lead to 5-1 in the bottom of the third on a Nathan Bull RBI single and plating a run on a wild pitch.

But the Titans exploded in the fourth. Chestatee starter Levi Stowers cruised through the first three innings allowing just the one Chandler bomb and a walk while fanning three. But he ran into trouble in the fourth with two walks and a double to get knocked out of the game.

Bryan Cantrell came on for Stowers but was not able to record an out as the Titans had four straight batters to reach. The Titans had just two hits in the inning but took advantage of five walks and two big Chestatee errors to grab a 7-5 lead.

North Oconee scored single runs in the fifth, sixth, and seventh, to blow it open.

After Chestatee roughed up starter Joe Waddell for four runs on three hits in two-plus innings, Stiles Begnaud went the final five innings yielding just one run on one hit while striking out 11 to get the win for the Titans.

The two teams will close their three-game series on Friday in Bogart with Chestatee looking to salvage one game.

It wasn't a blowout until the seventh inning.

The second-ranked Trojans (7-3, 2-0 Region 7-3A) blew open the Region 7-3A contest against Gilmer in Ellijay in the seventh inning, scoring eight runs to put the game to bed.

It was the Trojans' second straight win over Gilmer this week. They'll play Game 3 on Friday.

Leading 5-1 going into the seventh inning, Eli Reece and AJ Jones started the inning with back-to-back singles and Grayson Kirby was hit by a pitch to load the bases.

Tate Brooks ripped a single that scored Reece, Hudson Barrett was hit by a pitch during the next at-bat to score Jones to go up, 6-1.

After that, the Trojans fired off six more runs.

Barrett, Jaret Bales and Cooper Helton drove in two runs each, while Brooks and Jace Bowen had one RBI apiece.

Bales earned the win on the hill, giving up two hits while striking out seven in six innings of work.

The fourth-ranked Bears opened the game with a 5-run first inning to take a 5-1 lead and set the pace over the next five innings.

Cherokee Bluff (7-3) scattered 11 runs across four innings, including a four-run fourth inning to run-rule the Vikings (0-8).

East Hall took the early lead in the top of the first inning when C McCullough scored on a fielder's choice, 1-0.

But that didn't last for long.

In the bottom of the first, D Kautz and Jenkins scored off an error to put the Bears on the board and ahead. Claytyas singled on a bunt to third that scored T Corbin. That was followed with a C Miele double to left field to push Claytyas home and give the Bears a 5-1 lead.

Lucas Tritt and Miele finished with two RBIs. Dylan Kautz, Claytyas, Tyler Zawacki and Ty Corbin all drove in one run each.

Reece Chambers picked up the win, allowing one run on three hits and two strikeouts in two innings of work. Jared Holcomb, in relief, pitched two hitless innings, while striking out four.

After Dawson County took the lead, 2-0, in the top of the third, the Spartans (9-3, 2-0 Region 7-3A) turned up the power, scoring 12 unanswered runs over the next two innings to run-rule the Tigers.

After Nick Mullinax and Kolton Rucker singled to open the third inning, the pair would score two batters later on an error.

The Spartans, however, answered in the bottom of the third. Ryan Svetz and Will Brannan started the inning with a single to center field. Braden Simms then doubled to send Svetz homes. Jackson Cooper's two-RBI double, on the next at-bat, scored Brannan and Simms to give the Spartans a 3-2 lead.

Later in the third, Tyler Maynard doubled and Justin Shaffer singled, scoring Cooper and Jayden Badger, who was courtesy running for Maynard.

The Spartans added six more runs in the fifth inning.

Maynard pitched all five innings, giving up one run on three hits while striking out four.

The No. 1 Wolves (12-0, 5-0 Region 8-6A) slowly chipped away, scoring eight runs over six innings to shutout Lanier at home on Wednesday.

The Wolves scored one run in the first and second innings and by the fourth inning, had a comfortable lead, 6-0.

Buford padded its 2-0 lead with two runs in the third inning off a Brett Rogers two-RBI single. The hit scored Nathan Smith, who led off the inning with a walk, and Riley Stanford, who reached on a single.

In the fourth, Dylan Lesko drove in Treyton Rank, and Brant Baughcum scored on the throw home. The Wolves were in control, 6-0.
Buford added two more runs in the sixth inning.

Jackson Brockett tossed five innings to get the win, allowing two hits while striking out 10.

J. Ben Haynes stroked a two-run triple in the top of the 10th innings to propel the Warriors to a wild win in Region 7-3A action.

The Indians pulled within 7-2 with two runs in the bottom of the fourth and then used a seven-run fifth, highlighted by a two-run single from Hayden Cleland, to grab a 10-8 lead.

Both teams scored a run in the ninth before White County won it in the 10th.

Lumpkin County racked up 12 hits on the night, led by Harper Davenport, who had four hits and two RBI. Scooter Ligon had three hits and Cleland and Cooper Scott had two hits each for the Indians.

Cleland finished with three RBI and Davenport, Scott, and Childs each drive in two runs for Lumpkin.

The two teams will complete their three-game series on Friday in Cleveland with the Warriors looking for the season sweep.

Rhett Addis and Trevor Stevens combined on a three-hitter and Azzi Cervantes had three hits and four RBI to lead the Raiders to a big Region 8-6A victory on the road.

Logan Hare and Adam McDuffie both had two hits for Habersham (5-5, 4-1 Region 8-6A). Austin Jones, Logan Bogue, Cooper Shirley, and Trevor Stevens had one hit apiece for the Raiders.

Baseball: No. 6 Dragons stay perfect in 8-4A
Jefferson sent 12 men to the plate in a six-run first inning en route to a 10-0 win in six innings over Madison County on Wednesday in Region 8-4A action... 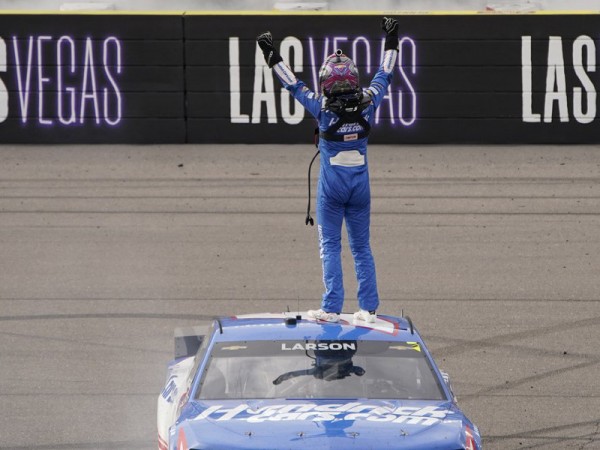 PODCAST: Hard Left Turn - Larson win no gamble at Las Vegas
While not as unexpected as the three previous winners on the NASCAR Cup Series so far this season, Kyle Larson certainly wasn't thought to be a contender to be a winner...

Girls soccer: Jackson Co. beats Johnson in 8-5A
Jackson County moved into a tie for second place in Region 8-5A after taking a 6-1 win over Johnson on Wednesday...
Sports

Track: Fast track at Bluff highlights tri-meet
It was a fast track Tuesday at Cherokee Bluff. Both Bluff track and field teams played host to a three-team meet with Habersham Central and Jackson County.. 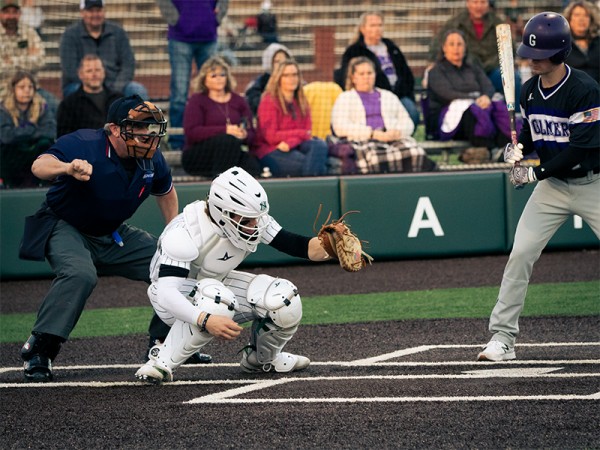 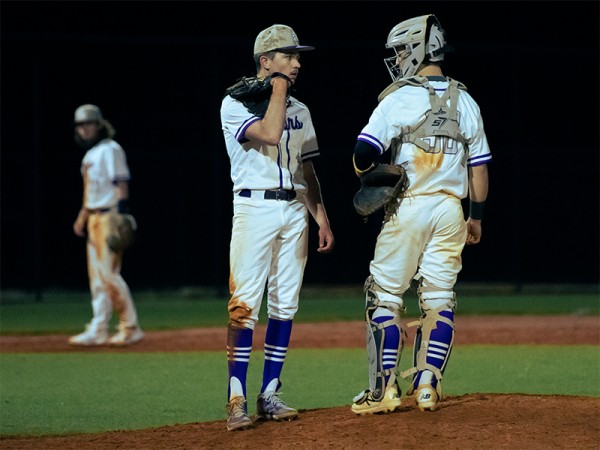 Baseball: Bears fall to No. 1 Hart Co. in pitcher's duel
Cherokee Bluff is showing it will be a force to be reckoned with after taking Class 3A No. 1 Hart County to 10 innings before falling 4-3 on Monday at Bears Field...
By AccessWDUN Staff