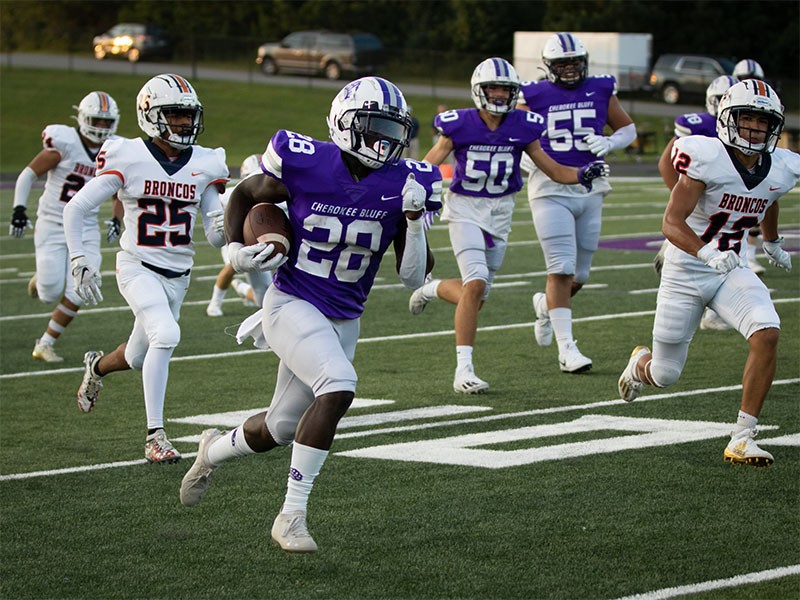 5 Things: What we learned from Week 9 of high school football

Here are five things we learned in Week 9:

It's deja vu all over again in Region 7-3A. In 2020, Cherokee Bluff, Dawson County and North Hall all got off to perfect starts in region play before finally facing each other in a three-week spring to the finish against each other that decided the region title. The exact same thing has now played out in 2021. The defending region champion Bears are 7-0 again after a 9-0 start last year. North Hall has won five straight, including four in region play after a 1-2 start that saw losses to outstanding Stephens County and Hart County teams in the non-region schedule. Dawson County started 0-3 for the second year in a row and, for the second year in a row, they've responded to win four straight and put themselves in position to fight for a region title. Now the three will play what amounts to a round-robin tournament to determine the region championship. It starts this week with Cherokee Bluff hosting Dawson County Friday night. Last year, the Bears used a blocked field goal and a late 4th-down conversion to hold off the Tigers 28-27 in Dawsonville.

Entering the season, much of the talk surrounding Buford was focused on their slew of talent at the offensive skill positions. With a Stanford-commit at quarterback in Ashton Daniels, a backfield featuring Colorado-commit Victor Venn and Boston College-commit C.J. Clinkscales and a receiving corps highlighted by Alabama-bound Jake Pope and Florida-commit Isaiah Bond, there was plenty to talk about. Now, however, it's time to talk about the Wolves' defense. Anyone who knows head coach Bryant Appling knows he cut his teeth building some of the best defenses in state history as defensive coordinator under previous Buford head coach Jess Simpson. He has to be proud of what the 2021 unit is doing now. The Wolves (6-1, 3-0 8-6A) have pitched three straight shutouts, not allowing a single point yet to a region opponent, and have allowed just 27 points total in their last six games after giving up 27 in their season opener at Class 7A third-ranked North Cobb. Friday night was another brilliant display, as they held Shiloh to just 82 yards of total offense, a number that Buford's offense surpassed in the opening quarter. It keyed a 37-0 win at Tom Riden Stadium. If that defense continues to play at this level, they'll have no problem capturing another region championship in a few weeks.

3. After tough non-region, Rabun County is now in rhythm

It's starting to look to easy for Rabun County. Of course, it would be hard for games not to seem easy after how they opened their 2021 schedule. The Wildcats dropped the season opener to Class 4A No.1-ranked Jefferson in a defensive slugfest and after routing several schools from North and South Carolina, they had another hard-fought battle at defending Class 3A champion Pierce County that ended in a 28-21 win. With those battles in their rearview mirror, they are now in rhythm and it's coming at the expense of the teams that have the unenviable responsibility of playing them in the final weeks of the regular season. It was Banks County's turn to play the 'Cats Friday night and it ended with a 63-0 Rabun County romp in Homer. It was the third time in the last five games that Rabun (6-1, 2-0 8-2A) has scored at least 60 points as Gunner Stockton looks like he's found chemistry with new additions at receiver in Jaden Gibson and Baxley O'Brien. Expect more video-game-like numbers out of the mountains in the coming weeks and, very likely, some state records to go along with them. Elbert County and Union County are the last lines of defense to keep Rabun County from their eighth straight region championship.

4. Jefferson, North Oconee on collision course in 8-4A

After a month of region play, undefeated Jefferson now knows what it needs to do to capture a school-record third straight region championship. The Dragons (7-0, 3-0 8-4A), who have been ranked No. 1 in the state virtually all season, have rolled through the first seven games of the season with only their opening matchup against Class 2A No. 1 Rabun County being within 20 points. Now, after wins over region opponents Flowery Branch and Cedar Shoals and a BYE week, it looks like 8-4A will come down to Jefferson and North Oconee. The Titans also beat Flowery Branch 14-7 two weeks ago and are 4-0 in region play. The two teams did not play last year as COVID-19 protocols called off the matchup. This year, they're set to meet on October 29 at Memorial Stadium in what will be the regular-season finale for North Oconee. Head coach Gene Cathcart will not let his team overlook Chestatee this week, who has been arguably the most improved team in the region this year, but it's unlikely that the winner of that showdown in two weeks will not win the region. The Dragons also need to get healthy, as injuries have become a factor for them over the last two weeks.

As mentioned above, Cherokee Bluff, Dawson County and North Hall are battling for the region championship in 7-3A. There is one more playoff spot that still looks to be up for grabs though, and it looks like it will be decided this Friday in Dahlonega. Lumpkin County will host White County in a matchup of two teams currently tied for fourth place in the region standings with identical 1-2 region records and 2-5 overall records. The Indians have been the surprise team in the region, winning more games in seven tries this year than they had in the last two seasons combined and winning a 32-30 thriller at The Burial Grounds earlier in the season to put them in playoff contention. If there's been any surprise for White County, it's that the Warriors are still fighting for their playoff lives entering the final three weeks of the season as they entered 2021 expecting to compete for the region title. It should be an interesting battle as Lumpkin County will have to find ways to slow down White County's explosive play makers Darius Cannon and Silas Mulligan. The Warriors will need to slow down Indians' quarterback Cooper Scott, who has proven to be a threat both with his legs and his arm.