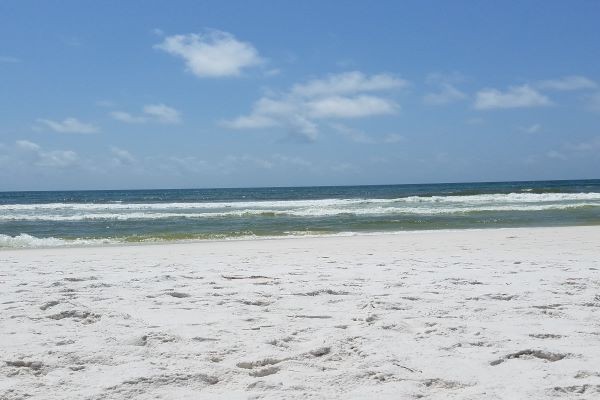 When it comes to giving a name to the place where the sea, it sometimes depends on where you are as to what you call it. My mother always used the term “shore” when referring to her summer days spent working at beach resort in New Jersey. It was always referred to as the Jersey shore. Everywhere else, especially Florida, was the beach.

The beach by any other name is a beautiful place, in my opinion. Even during storms and vicious high tides, there is a certain beauty. I just don’t want to be there on those days.

Nay give me a sunny day with a pleasant breach breeze. Let me plop down in a saggy chair under a big umbrella. Book in one hand and an icy beverage in the other. Give me a spot where I can read, doze, and watch the waves. Let me splash with abandon in those waves and get sand in places it shouldn’t be. That’s what I love about the beach.

I also love watching the people.

On one particular trip to the beach, we saw what looked more like a caravan arriving from a long trip across the desert. They made camp with umbrellas and tents of every sort. They even had a flagpole with four flags fluttering in the Florida breeze. The American flag was on top. The third was an L.S.U. flag and fourth on the pole was a New Orleans Saints banner. So clearly the lost tribe of Louisiana had arrived. As to the second flag, from our vantage point it looked like the Western Sizzlin’ logo which for all I know could be the state flag of Louisiana. Not a bad banner to follow.

Fortunately, the lost tribe of Mississippi parked their camels and made camp far away from the Cajuns. This was important due to the fact that they were sporting an officially licensed Mississippi State tailgating tent. We didn’t need a rumble on the beach. The Mississippi group was made up of what looked like ten frat brothers from that fine establishment. They arrived early and didn’t break camp until after dark…well after the L.S.U. caravan drifted away. I just wish their mamas could have seen them leaving. They made sure they left no trash, or for that matter no trace that they had been there. There were plenty of adults on the sand that day that could have taken a lesson from those young men. Good job mom!

Then there were the bikinis. When he first introduced his post-World War II bombshell of a bathing suit in Paris, Louis Reard showed the model wearing it holding a box that was two inches on all sides. His brag was that it used so little material it could fit in what looked like an oversized ring box. Given all the packaging they use on package of pens these days, I think we could take a lesson from ole Louis. It is also worth noting that when he was going to debut his creation in Paris, he couldn’t find a model who would dare to be so bare. So, he hired a nude dancer from Casino de Paris. Likely it was the most clothing she had worn at work in some time. Although, it might not be considered as revealing by today’s standards, at least compared to some styles that were on the beach that day. By the way, Reard was an automotive engineer. Although French, it seems he was believer in the American male motto “Babes and Buicks Forever”.

I may not be dead yet, but it seems I am slipping. While soaking up shade under the umbrella, my wife said, “Doesn’t leave much to the imagination.”

She nodded to our left. Standing about ten yards away was a woman who took her dentist’s recommendation to floss to heart. But I think he meant to do it a couple of times a day, not ALL day and certainly not THERE. I’ll admit she had the figure to do justice to wearing a thong, or “fanny floss” as we call it in the South.

Had my wife made that remark in my younger day, I would have made the type of joke betraying the fact that I’m still a guy, as the song says.  However—and this really unnerved me—the only thing that came to mind I couldn’t bring myself to say. I did not want my wife to think that my masculinity had disappeared. But all I could think of in that moment was whether it was our turn to order the ham for the family Christmas gathering.