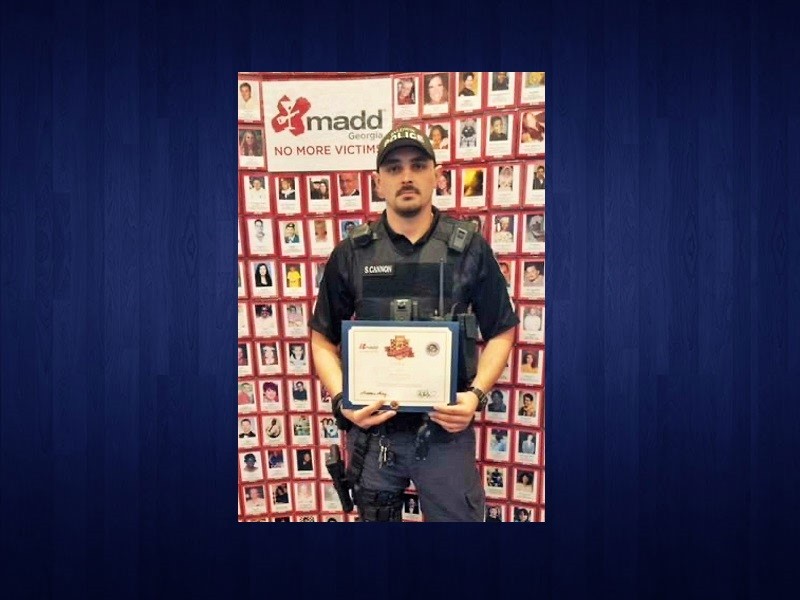 Former Baldwin Police Sgt. Stephen Cannon is shown with the Mothers Against Drunk Driving Award he received while with the department.
File photo
Contact Editor

The City of Baldwin has reached a settlement with former police Sgt. Stephen Cannon in his wrongful termination lawsuit alleging violation of the Georgia Whistleblower Act.

Though few details have been given of the undisclosed settlement, one condition was that Mayor Joe Elam write a letter clearing Cannon of any wrongdoing.Cannon’s lawsuit was filed in Habersham County Superior Court in 2019, then was moved to federal court.

Officer had impeccable record prior to termination

Cannon was employed as a police officer (referred to as “deputy” in the lawsuit) then promoted to sergeant on March 12, 2018. He remained a sergeant with the city until what the lawsuit claimed was “his retaliatory termination” on June 18, 2018.

Cannon began employment with the city in August 2017, and at all times relevant to the legal action was managed by then-Police Chief Charles Webb.

“Prior to his termination, Mr. Cannon was never disciplined,” court documents state.

Officer's lawsuit says he was fired for pointing out policy violations

According to the lawsuit, on June 18, 2018, Webb terminated Cannon, stating a reason for the termination was not required.

“Additionally, within the same conversation, Chief Webb stated that Mr. Cannon was being fired for ‘bringing down department morale’,” court documents state. “Mr. Cannon was terminated without the use of due process outlined by the city’s policies and procedures to its employees.”

“Mr. Cannon, in his role as sergeant, had previously discussed with Webb some concerns that he had regarding certain employee violations of Georgia law and departmental policies,” court documents state. “Defendant targeted Mr. Cannon because he opposed wrongdoing including but not limited to sex/pregnancy discrimination of another, Fourth Amendment, Eighth Amendment, Ethics violations and other violations of Georgia law.”

The lawsuit alleged that Webb failed to rectify any of the infractions reported by Cannon, including his objections to the department’s violation of the medical restrictions placed upon his girlfriend, a female officer, who was pregnant.

“On or around Dec. 12, 2017, Mr. Cannon’s pregnant girlfriend, who was also employed by the City of Baldwin … submitted a doctor’s note to Chief Webb asking to be placed on a desk position so that she would not handle narcotics and risk harming the baby,” court documents state. “Chief Webb complied until February 2018. In February, Chief Webb removed plaintiff’s girlfriend from the desk job and forced her to work in the evidence room again, which included handling narcotics. Mr. Cannon complained to Chief Webb in or around the end of February 2018 about his girlfriend having to handle narcotics again because it could harm the unborn baby. Cannon asked why Webb was not complying with the doctor’s note. Chief Webb became enraged at Cannon for complaining and told Cannon’s girlfriend that it appeared Cannon did not want her to work at all and that she needed to ‘figure it out’. Fearful of losing her job, Cannon’s girlfriend did not discuss the issue again and neither did Cannon because he didn’t want to risk his girlfriend losing her job.”

“As another example of defendant's failure to respect the law, after violating department policy, the Fourth and Eighth Amendments, which were reported to Webb by the plaintiff, another deputy … was promoted to sergeant,” court documents state. “These violations were captured on video by a body camera. The plaintiff raised his concerns about this and other legal issues to Webb.”

The lawsuit detailed what Cannon considered questionable and/or illegal actions of that other officer, who remains on the job.

“On the date of the above infractions, according to information and belief, [the other officer] entered the apartment of a suspect's girlfriend without her permission,” court documents state. “When she objected, the girlfriend was tasered and medical treatment was not provided in violation of the Fourth and Eighth Amendments. This was recorded on video by a body camera.

The lawsuit alleges that Cannon engaged in protected activity when he disclosed violations of laws, rules, or regulations to Police Chief Charles Webb, then the City of Baldwin took adverse action against Cannon when it terminated his employment in retaliation for opposing unlawful job requirements.

The suit also alleged the City of Baldwin violated the Georgia Whistleblower Act by adopting or enforcing policies or practices preventing employees from disclosing violations of law, rules, and regulations to either a supervisor or a government agency.

Additionally, Cannon filed a charge of discrimination for Title VII retaliation against the City of Baldwin with the Equal Employment Opportunity Commission on Dec. 18, 2018. On Sept. 26, 2019, the EEOC issued Cannon a Notice of Right to Sue.

“On June 22, 2018, Mr. Cannon was terminated based on the pretextual reasons that he violated department work standards; conduct and professional image policies during his probationary period and in violation of … City of Baldwin Employee Policies,” court documents state. “The effect of the city’s above-mentioned conduct has been to deprive Mr. Cannon of equal employment opportunities and benefits due to him because of his willingness to oppose such discriminatory practices. The actions taken against Mr. Cannon by the City of Baldwin have caused him to suffer both monetary and non-monetary damages. Accordingly, Mr. Cannon is entitled to the equitable and monetary relief set forth in the following prayer for relief for the city’s violation of his civil rights under Title VII.”

Cannon sued for an award of back pay and benefits, compensatory damages, reinstatement of front pay, reasonable expert fees, costs, attorney’s fees and all other appropriate damages, remedies, and relief available under Title VII.

An order from U.S. Magistrate Judge J. Clay Fuller issued July 28 orders the dismissal of the case with prejudice, meaning it is a permanent dismissal and follows mediation resulting in a settlement.

A condition of the settlement included then-Police Chief Charles Webb writing a letter clearing Cannon’s name and exonerating him of any wrongdoing.

Further details of the settlement were not disclosed.

Cannon said the settlement prevents him from discussing its terms.

Baldwin Mayor Joe Elam said the city could not comment on the settlement itself, and the city did not respond to allegations against the other officer.