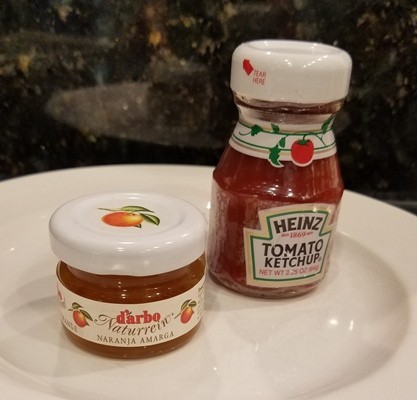 People love to collect things. As a child, I collected Matchbox cars and mouse figurines. Although I still have the mice—they’re packed away in a big box—I no longer have the cars. For some reason, they did not get boxed up with the rest of my childhood when I left home. Sad to say, I would trade the mice for the cars.

As an adult, I’ve never really collected. But in moments of boredom, I think that I need to have an obsession other than water skiing. When that happens, I head for the boat until the feeling passes.  Yet, there is one compulsion that comes over me, especially when we are on a trip.

It has often been said that it’s the little things in life that really matter. The more trips around the sun I make, the more I find that to be true. Usually they are referring to quiet moments with a cup of coffee while enjoying the sunrise or a walk through the forest. I totally agree with all those “stop and smell the roses” ideas. But my idea of the little things really is the little things.

Much to my wife’s dismay, when we travel, I like to collect the miniature jams, jellies and ketchup you find on hotel room service trays. It’s not the collecting of these items that bothers her. It’s the fact that I acquire them from the trays other guests leave outside their rooms when they’ve finished the meal.

Let me be clear, I don’t take any that are opened or have been used. I only acquire the ones that still have the plastic seal intact. This is my only way of snagging these due to the fact I’m too cheap to order room service.  If they are going to charge you $6 for a bottle of water in your room, I can only imagine what a B.L.T. would cost. It would likely be cheaper to grow the tomatoes and raise the bacon myself.

I’m not sure why I find items that are more suited for dinner with an American Girl Doll so interesting. It’s not like I ever use them. After they accumulate in the pantry to the point they push out adult-sized staples, my wife tosses them in the trash. The portions are just too small to really be of any use, even as a room service condiment. Take the ketchup bottle. It only holds two and a quarter ounces of that rich red elixir of life. That’s not even enough for three fries. The same goes for the squatty jars of jelly. There’s only enough for one bite of toast, if you’re doing a proper breakfast. The outlook is even more dismal if you’re trying to jelly a cathead biscuit.

Why do I feel the compulsion to be a mini condiment kleptomaniac? I looked it up and the closest thing I could find falls under the broad heading of people who like to play with doll houses. Granted, I didn’t do exhaustive research. Just a five-minute web search, but that was enough to tell me I may be “unique”. That’s clinical polite-speak for “weird”. Since a scientific term for this habit hasn’t been coined, I think there’s some Nobel prize-winning ground to be broken.  I’m up for the task of being lab rat number one provided I can have a cut of the prize money…in small denominations, of course.

What I did learn is that they think people who love to work with the miniscule are looking for something in their lives they can control. They also report that miniature items offer a lot of sensory stimulation in a small package. Apparently, that’s something our brains cannot resist. Not to poo-poo the research, but I have another theory. We’re fascinated with miniatures because they are just so darn cute! Of course, real research scientists never use the word “cute” in their findings…at least not the ones who get funding. I’ve also been told that only grandmothers and sorority girls only use that word. I’m sure after this hits the web, there will be a public demand for my man card.

While I would like to think that I’m unique in my love for little food, I am not. My son the chef tells me that at one of the restaurants where he worked, they had a tasting menu. I thought it was like the old scratch-and-sniff notebooks from my school days. I figured it might be a menu with pictures of the food that you could scratch-and-lick to determine what you want to order.

As usual, I was wrong and disappointed. A tasting menu is simply a meal of seven to eight courses consisting of small plates of the items on the restaurant’s menu. It lets you sample the dishes so that you will have a better understanding of what menu items you may want to order the next time you visit.

They would always put a surprise course in the lineup. The favorite was a miniature cheeseburger.

Hmmm...sounds like just the right size for my 2.25oz bottle of Heinz.