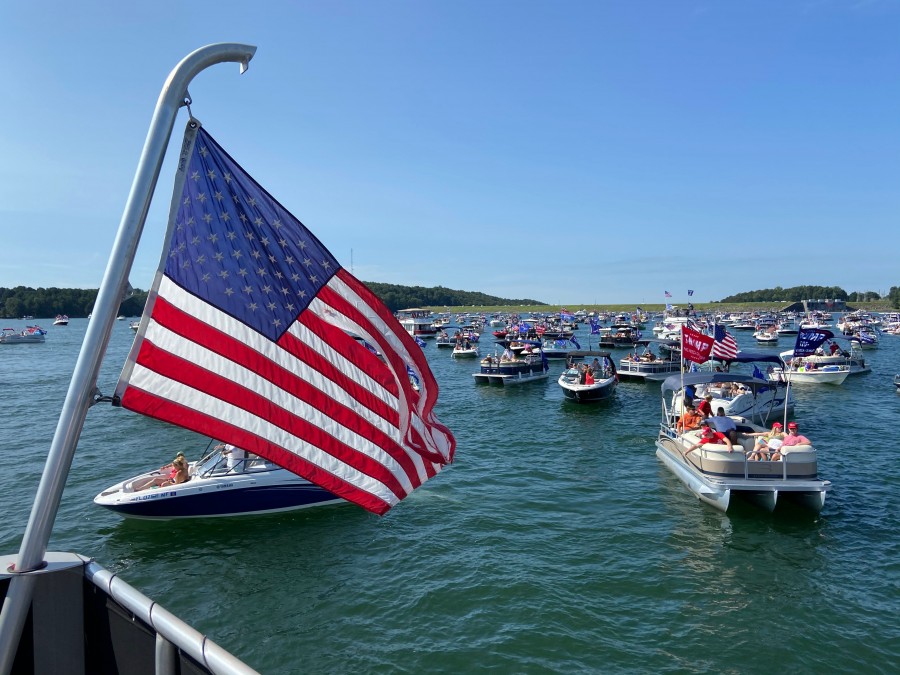 It was a sight that had to be seen to be believed- roughly 3,000 boats of all sizes decked out in patriotic decor on Lake Lanier this morning for the first ever Great American Boat Parade.

Event organizers had anticipated around 1,200 boats for the parade, but according to Mark McKinnon with the Georgia Department of Natural Resources, officials estimated between 3,000 to 4,000 vessels on Lake Lanier at the time of the event.

The parade resembled many of the Trump boat parades seen around the country, and event organizers Dustin Melton and John Gunter said that they both drew inspiration for today’s event from those parades.

However, they changed the theme of their parade so that anyone could feel comfortable participating.

“I did not want the parade to be tied directly to any political event or any one politician,” said Gunter. “I think our nation is in a bigger place right now and the direction that I wanted to see the event move was to support general patriotism.”

“We didn’t want to be biased and restrict everybody with the theme,” said Melton. “So we went with Great American Boat Parade and it’s a parade that’s unbiased.”

The parade kicked off at 11 a.m. in front of the Buford Dam. Participants were asked to join in a moment of silence to honor fallen Captain Stan Elrod with the Department of Natural Resources, who was hit and killed by a vehicle earlier this week.

The moment of silence was followed by the singing of the National Anthem by a local artist. After the singing, boats proceeded along the parade route.

The route marked roughly 8 miles round trip, from the Buford Dam to just north of Aqualand Marina and back.

Boats were sectioned off into different areas based on their size to reduce the likelihood of an accident. McKinnon said that no accidents were reported during the parade.

During the parade, boaters played music, blew horns and yelled greetings to fellow participants. Several airplanes flew over during the event, as well.

For those who preferred to watch the parade from the land rather than the water, several spectator areas were set up along the parade route. Some of these areas were at local businesses that sponsored the parade, including Aqualand Marina, Holiday Marina and Margaritaville at Lanier Islands.

Melton said that he created a Facebook group for the event, which helped it gain in popularity. Gunter joined in on the planning process with Melton and a third organizer, Brett Downing, helped secure the sponsorships.

Boaters were asked to register their vessel ahead of time with a small registration fee. Proceeds from the event were to go to the Tunnel to Towers Foundation.

The parade ended around 2 p.m. with the completion of the parade route. From there, participants were encouraged to visit one of the sponsor businesses or were free to go their separate ways.

Melton said that he hoped that along with following general boating safety guidelines, those who participated in the parade would feel free to celebrate their freedoms.