A hole in the water 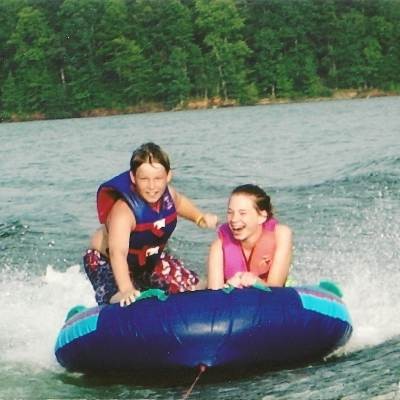 They say the only happiest two days in a boat owner’s life is the day he buys the boat and the day he sells it. I disagree. Although having bought and sold, there is certainly a euphoric feeling on both occasions. But if you buy something decent and maintain it, there are many days in between purchase and sale that are both unregrettable and unforgettable.

I remember our entry into the aquatic adventure of boat ownership. A good friend of mine gave me his boat.

He had inherited it but never used it. It was just sitting in his driveway and he was tired of looking at it. He heard me say I was in the market and decided he’d found his 1982 Sea Ray 18-foot bowrider a new home. He was right and so was the price: free.

It needed a new starter and a little TLC to get it likeworthy. But that didn’t take long, and tinkering is a part of boating. After a little sweat, some bruised knuckles and a few words from the sailor’s book of blue words, we were ready to fire up the inline six-cylinder Chrysler. It was a wonderful sound.

Now, some may argue that such a gesture would bring into question his friendship. I would not. That boat gave us more hours of sheer family joy than I will ever be able to thank him for. We picnicked, took the kids tubing and took friends on rides and fall leaf cruises. Every time we gave the kids the choice between swimming at the local pool or hitting the lake, the lake always won.

While my daughter preferred the tube, my son’s interest soon moved to skiing. We both learned together. A couple of other friends of mine joined the party and soon we guys were hitting the water together a couple of times a week during the season. There were several seasons we just didn’t want to quit. One year found us on a 65-degree Black Friday pulling each other up and down some chilly water. I wouldn’t trade that for anything.

After a few years, I felt the need to upgrade and purchased a slightly newer, bigger boat. Instead of a runabout, I got a true inboard ski boat. Again, it was another 20-plus year-old boat, but it ran great and looked good doing it. It was a Correct Craft 20-foot Martinique with tons of teak touches and a nice rumble when the V-8 was idling. There’s nothing like that burble…nothing. It’s audible testosterone.

I loved that boat, but apparently not as much as the person whole stole it. I’ll not forget the phone call I received from the dock master while doing the all-request lunch hour one sunny afternoon.

“Bill, it’s Jim. Please tell me you took your boat off the water for maintenance.”

“I wish. At least then we’d know where it is. No, it seems your boat and mine have been stolen off the dock. Can you come down and file a police report?”

Not exactly the request call I normally receive.

I didn’t remain boatless for long. Another friend heard of my plight and soon I was plying Lanier in a 24-foot pontoon boat. You couldn’t ski behind it, but you could really entertain on it. My son was in high school at the time and used it to visit friends and, on occasion, camp out on some of the islands that dot the lake. Having done the same thing with the family pontoon when I was a kid, it was nice to see the tradition continue.

Soon the itch to be pulled behind a big motor attached to a sleek piece of fiberglass while riding a sliver of aluminum and plastic became intense and the only ointment was another ski boat. This time one of my ski partners took the plunge on a Supra that I found while surfing the web and wishing I were surfing the lake. A couple of years later, we were using the ski boat more than the pontoon, so I sent the ‘toon sailing to another port.

I have since acquired the Supra from my ski partner. Or more accurately, he gave it too me. Running his own business and other concerns led him to the decision. Again, I can never thank him nor repay him fully for the joy I get while on the water. Be it skiing, cruising, or picnicking in our favorite coves with friends, there is nothing like the drug that is boating.

All this is not to say that boating can’t be frustrating and sometimes frustratingly expensive. The new 37-gallon custom fabricated fuel tank, gas lines, fuel filter and throttle cable attest to that. But every time I have threatened to sell the boat and give up the slip, my wife stops me. She knows what it means to me to be on the water.

There are so many memories of family on Lake Lanier for me. From the days as a kid when the family would cruise and fish on that old 20-foot fiberglass pontoon boat to the times with Kate and the kids tubing, skiing, and fishing.

As good as those memories make me feel, it’s the fact that there are more memories to be made that makes the trials of owning a boat worth it.

If you ever feel the need to check the hydrostatic tension of the aquatic surface, drop me a line and I’ll be glad to throw you a rope with a handle.