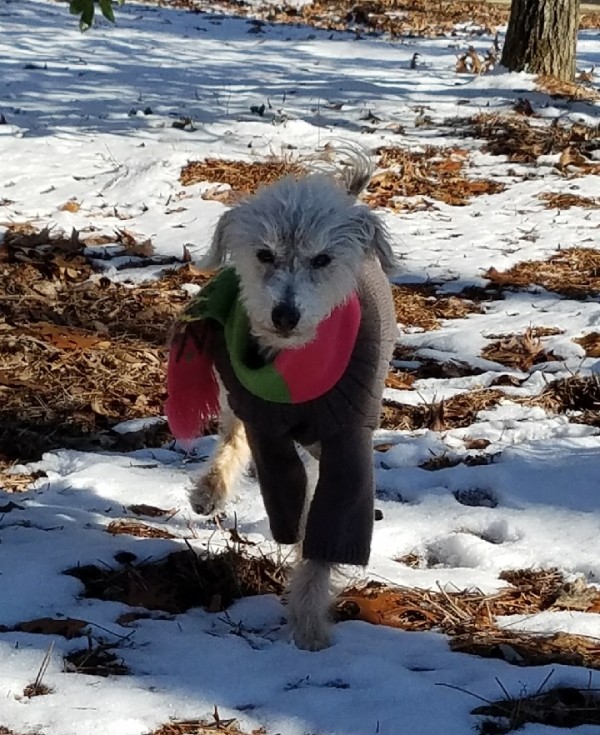 It was 3:44p.m. on a Tuesday in July when the text arrived. I was just getting in my car for the drive home. Normally the drive home is something one looks forward to. Work is behind. Family time is ahead. But not this particular Tuesday in July because there was a horribly adult task waiting. The text removed the burden of that task but not the grief.

A call to my wife confirmed that Rainey, our dog of 17 years, had passed away. She had been suffering from dementia for a while. It was never so bad that she lost her way, but she would sometimes stand at the door unable to process how to step up into the house. Eventually, she would get it. Lately, however, we were having to pick her up and bring her into the house.

She wasn’t always that way. Up until the last few weeks of her life, when I would go home to let her out at lunchtime, we would wander down the driveway together and stroll along the grass at the edge of the woods across from our home. Then we would head up the steep driveway back to the house for lunch. We’d sit on the front porch together on pleasant days. Winter days I’d fire up the gas logs and we’d watch a little television. And many a winter’s eve she’d plop down in her bed in front of those gas logs and snooze, the picture of utter contentment.

Rainey came to us as a gift from my mother-in-law to my daughter. She was about the size of a hamster and grew to about ten pounds. We think she was a mix of a yorkie and a poodle. A yoodle if you will. She looked more like something put together out of spare parts. Her hind legs were longer than her front legs which gave her the look of a jacked-up street racer. Her body hair was like wire. Her head was covered in poodle curls. She was one of a kind.

There was something about her that I noticed when she first arrived: a tattoo. I thought someone had drawn on her belly with a green marker.  She had been spayed at an early age and the vet marked the scar with a small green tattoo so that if her owners went to have the procedure done, her family vet would know the mission had been accomplished.

In addition to rocking a tattoo, she looked good in a sweater. Not having a thick coat and being only slightly larger than a rabbit, we worried about her going outside during winter. She loved to walk and explore, and we were glad to accommodate. Well, most times. On those quick walks just before bed on cold winter nights, we were concerned about her getting too cold. So somewhere, someone bought her a sweater complete with a little scarf that was sewn on and dangled down ever so slightly. She was a cutie in that thing and wore it every winter including her last.

One of her favorite things was “chase the sock.” It was played with one of our daughter’s many socks that had suffered dryer divorce. We’d throw that sock and she’d zip along our polished wooden floors slamming on the breaks just before getting to her prey. She’d slide six inches, scoop up the sock and hit the gas again, spinning those tires as she dashed away with her prize. She would have made a good NASCAR driver.  I used to throw that sock over and over when I got home. It was good therapy for both of us.

She spent plenty of lap time with all four of us. After my daughter went to college, Rainey could be found sacked out with my son on his bed. They also spent time on the couch playing video games. To say she was a good and loyal dog would be accurate, which brings me to that particular Tuesday in July.

Rainey had been unable to stand or walk on her own all day. She hadn’t eaten in a couple of days. Kate was working from home and Rainey was in her bed beside her.  At lunch, my wife had called the vet. He indicated that perhaps it was time to make that dreaded adult decision. We both agreed that we would go late that afternoon following work.

The sadness and anxiety were palpable. I think Rainey sensed it and in her final effort to comfort us, as she did in so many ways over her nearly two decades, she let go, saving us from having to make that difficult adult decision.

When each of the children left, Rainey stayed behind. In a way, she was an ever-present link to our children and our days of active parenting. When you’ve done something for twenty years, it’s kind of hard to quit cold turkey. Thanks to Rainey, our nest wasn’t truly empty.

But now it is. The profound silence will take some getting used to. The click-clack of her nails on the wood floors no longer greets me when I come home for lunch. For years I would just eat at my desk even though I live less than two miles from work. Rainey was my reason for taking a break. Now when I come home there’s just silence to go with my sandwich. It is not a good combination.

Upon hearing of Rainey’s death, my daughter commented that all dogs go to Heaven. If any dog deserves to be there, it’s Rainey.

Godspeed Rainey. You were better than I deserved and a blessing to us all. I hope someday we'll once again play chase the sock.