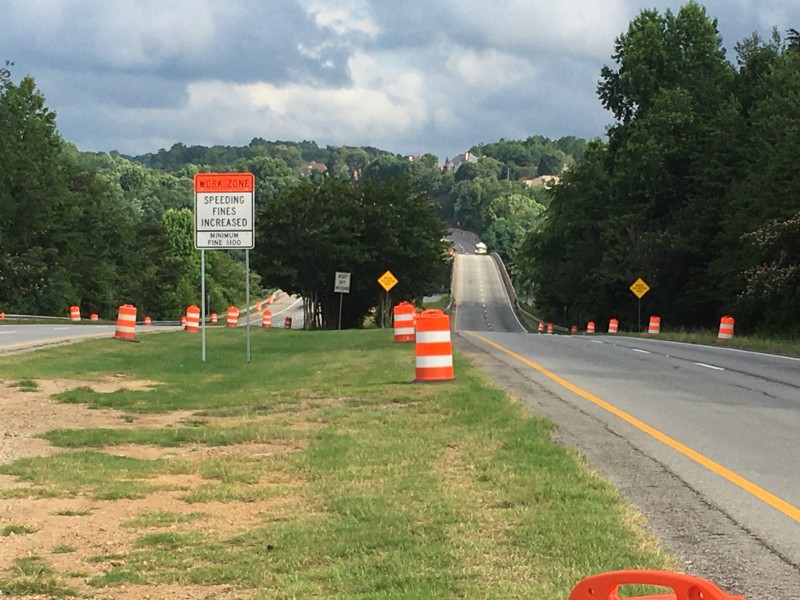 GAINESVILLE – Drivers traveling the Dawsonville Highway corridor know something is up.

Curious commuters approaching the dual-bridges that span the Chattahoochee River eye hundreds of orange-and-white-striped construction barrels standing like sentinels along the busy roadway’s shoulders; a dozen newly installed signs are covered with plastic trash bags as if to hide a secret message; heavy-gauge reinforcing bar lies piled at the bridge’s threshold.

Get ready for the start of the next bridge replacement project on Lake Lanier.

Actually, only one of the bridges is being replaced: the one built in 1956, and recipient of countless repairs, resurfacings and patches ever since.  It’s known as the “Jerry D. Jackson Bridge”, named in honor of the longtime Hall County representative at the Georgia General Assembly.

The Jerry Jackson Bridge worked alone for 36-years, until 1992, when a second bridge was constructed alongside it, slightly downstream, solely for the purpose of handling the growing traffic demands.  Now the 64-year-old patriarch carries just the traffic headed westbound.

Georgia Department of Transportation officials say bridges hitting the half-century mark in age are deemed “deficient”, so in 2016 just over $1.8-million was designated for preliminary design and engineering of a new structure.

That planning is done and now the construction phase is ready to get underway; estimated cost of construction: $25,119,203.72.

Strickland says this construction project will, however, be a little different than the bridgework accomplished on Lake Lanier so far.  “That bridge...is actually being replaced in a really creative way.”

“Starting on the seventeenth of July,” Strickland explains, “you’re going to see the start of a traffic shift.”  Travel lanes will be shifted to the far right on both bridges, maximizing the distance between eastbound and westbound vehicles, and the new bridge will be constructed between the two bridges.

It might seem like there is not sufficient room between the two bridges to construct a third bridge but there actually is according to GDOT planners.

“That way we can maintain traffic while we are constructing it,” Strickland said.  “This is a really innovative and creative way to get things done quickly and on an accelerated schedule.”

In a press release Strickland wrote, “Motorists will still be able to travel on the existing eastbound and westbound bridges while the new bridge is being constructed. Upon completion, traffic will be shifted to the new bridge and demolition of the existing bridge will take place.

Strickland said, “This project should be complete in December of 2022.”