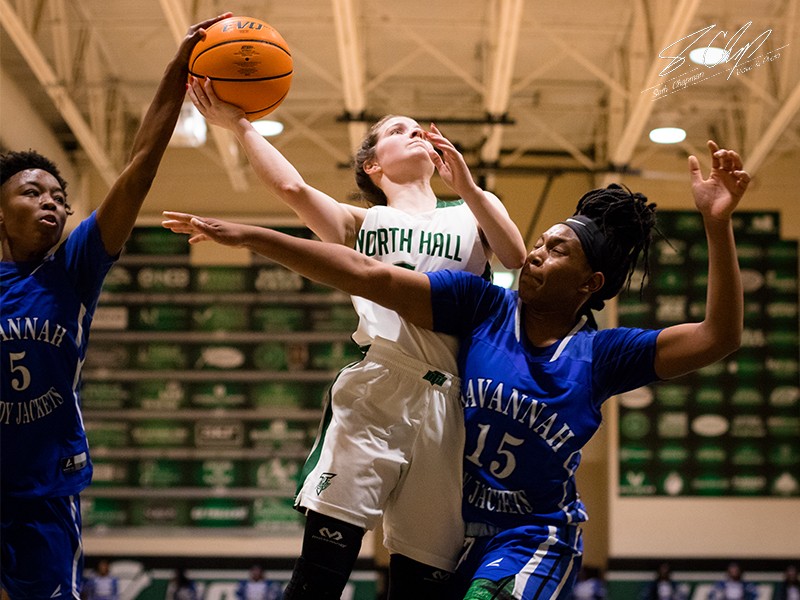 Maci Gillespie shoots during North Hall's win over Savannah last week. The Lady Trojans will play host Morgan County on Tuesday in the quarterfinals of the Class 3A tournament.
Photo/Seth Chapman
Contact Editor

If the Georgia High School Association basketball playoffs weren’t already getting interesting, the quarterfinals, which are slated to begin Tuesday around the state, should get things heated up even more.

Seven northeast Georgia area teams, boys and girls combined, are still alive and all seven will be playing host in their quarterfinal matchups on either Tuesday or Wednesday (click here for the quarterfinals schedule for area teams). On the boys side, Buford in Class 5A, Jefferson in Class 3A, and Banks County in Class 2A are still standing. On the girls side, Buford in Class 5A, Jefferson and North Hall in Class 3A, and Union County in Class 2A are looking to move on as well.

All seven area teams still left also are region champions. Both Buford teams (Region 8-5A) are looking to repeat as state champions while the Jefferson girls (8-3A) who are into the quarterfinals for a fourth consecutive season, are trying to get to their first semifinal since 2006 when they were in Class A. The Jefferson boys (8-3A) are into the quarterfinals for the fist time since 2014 and are looking for their first semifinals appearance since 2010 (Class 2A).

Here is a breakdown of the quarterfinal round by boys and girls:

Class 5A: Regions 5 and 8 have dominated the early rounds pushing through three teams each into the quarterfinals. The northern half of the classification also has proven strong with 7 of the 8 teams into the Elite 8.

Five of the eight quarterfinal teams from 2019 and three of the semifinalists returned. However, only two region champs -- Buford (8-5A) and Southwest DeKalb (Region 5-5A) -- managed to survive while all four No. 2 seeds moved on.

Defending state champion Buford has a tough matchup with Region 7 No. 2-seed Kell, which is tied for third in wins (25) in the classification. But something will have to give. The Longhorns are averaging 76 points a game, which leads Class 5A, while the Wolves are allowing just 53 ppg on the season. Kell is 12-2 on the road and has won six straight. Buford is 9-2 at home.

Perhaps the best Elite 8 matchup will be Cedar Shoals traveling to Lithonia. The two teams are tied atop the classification in wins (26). The Jaguars are into the quarterfinals for the fourth time in six years, including a state runner-up finish to Buford in 2017. It is the sixth straight Elite 8 for the Bulldogs, who advanced to the semifinals in 2019.

Class 3A: Jefferson is the only area team left in a brutally tough classification. The Dragons are as hot as any team coming into the Elite 8 having won 11 straight. Only No. 1 Pace Academy (15) and No. 2 Windsor Forest (13) have longer current win streaks in the classification.

The Region 8-3A champion Dragons take on Region 1-3A champ Monroe-Albany, which has won six in a row. It will be a stark contrast between the Jefferson offense (70.3 ppg) vs. the Tornadoes defense, which leads the classification yielding just 47.7 ppg. Monroe is only averaging 58.3 ppg while Jefferson is giving up 59.2 ppg

Class 2A: The top teams have risen to the top. Seven of the eight region champions have advanced to the Elite 8. Only Chattooga, the No. 2 team from Region 7, cracked through the first two rounds taking out perennial power Thomasville in the second round.

But the current Elite 8 group is a new crop. Defending state champion Therrell is the only team to make the quarterfinals in 2019 and make a return in 2020.

The field is hardened with Swainsboro (2017 runner-up), Glenn Hills (2018 semis), Washington County, and Therrell with plenty of playoff experience. It also has some interesting newcomers like Banks County and Rockmart.

The top four ranked teams -- Swainsboro, Glenn Hills, Therrell, Spencer --  all advanced. Glenn Hills (2) and Spencer (4) will play each other at Glenn Hills while No. 1 Swainsboro plays host to Rockmart.

Banks County finally ended a long drought breaking out of the second round for the first time since 1995 and will take on Chattooga in a battle of unranked teams.

The two teams are eerily similar. Chattooga is in just its second Elite 8 since 1992 and has made the playoffs for a sixth straight season, a program-best for the Indians. Banks County is in its first quarterfinals since 1995. The Leopards had only had six playoff appearances before their current streak of six straight postseasons.

Class 5A: This classification has played more balanced than it probably is. Only three region champions have managed to survive -- Eagles Landing (Region 4), Kell (Region 7), and Buford (Region 8) -- with three No. 2 seeds also advancing. One No. 4 seed, Jones County, also advanced.

Three teams that made the quarterfinals in 2019 -- Eagles Landing, Veterans, Buford -- are back but only one team from last year’s semifinals (Buford) is still alive in 2020. Region 4 has shown its strength with three teams moving through. A pair of Region 7 teams also advanced with one each from Regions 1, 5, 8.

Three-time defending state champion Buford has been the class of the league winning the state title in every season it has been in the classification. The Lady Wolves have not lost to a Class 5A team since joining in the 2017-18 season going 53-0 in that span. Buford has chugged right along into the quarterfinals for a 13th consecutive year. The Lady Wolves have won their first two games by an average of 29.5 points and face a Carrollton squad that has not gotten this far since 2015. Buford whipped the Lady Trojans 62-32 in the second round in 2019. They are a heavy favorite to continue that streak to a fourth straight crown.

Class 3A: This classification, which pound-for-pound may be the toughest in the state, has been a slugfest. Four region champs survived the first two rounds -- Johnson-Savannah (Region 3), Sonoraville (Region 6), North Hall (Region 7), Jefferson (Region 8) -- with all four No. 2 seeds from the same regions also advancing.

North Hall finds itself in a similar spot as in 2019 when they took on a Region 8-3A powerhouse. They fell to Hart County last season on the road in the second round. The Lady Trojans match up with Morgan County this time. The Lady Bulldogs are no stranger to postseason success. After winning the 2016 title they made the semifinals the next season when the current seniors were freshmen.

The Lady Trojans are just 8-3 at Cottrell Court this season but have won 6 of their last 7 at home. Morgan County is just 4-6 on the road this season but has won three straight, including taking down Region 2-3A champion Tattnall County 57-51 last week.

The Jefferson girls (25-4) have won eight straight and own the most wins in the classification. The Lady Dragons take on a Greater Atlanta Christian team that has gotten hot down the stretch winning 5 of its last 6 overall and 4 of its last 5 road games. But the Lady Dragons have had success against the Lady Spartans beating GAC in last year’s second round.

Class 2A: Like the 2A boys bracket, this classification is loaded and has been dominated by the top players as 7 of the 8 region champions advanced to the second round. Southwest-Macon, the No. 2 seed from Region 3, is the only non-region winner to crack the Elite 8. Four of the eight teams from the 2019 quarterfinals -- defending champion Douglass-Atlanta, state runner-up Early County, Laney, Rockmart -- are back with three of the semifinalists -- Laney, Douglass, Early County -- also still alive.

If there is a surprise it has to be Region 8-2A champion Union County. The Lady Panthers are having their best season in nearly two decades and making the most of their first trip to the playoffs since 2016. They are on their deepest playoff run since finishing as the Class 2A state runners-up in 2001.

Union County faces Early County, which had its best season in 2019 since winning the Class 2A title in 2003. The Lady Bobcats are second in the classifications in wins (25) and have been a tough road opponent going 9-1 away from Blakely. The Lady Panthers are 12-2 at home this season.