Marist defense too much for Falcons in 24-0 loss 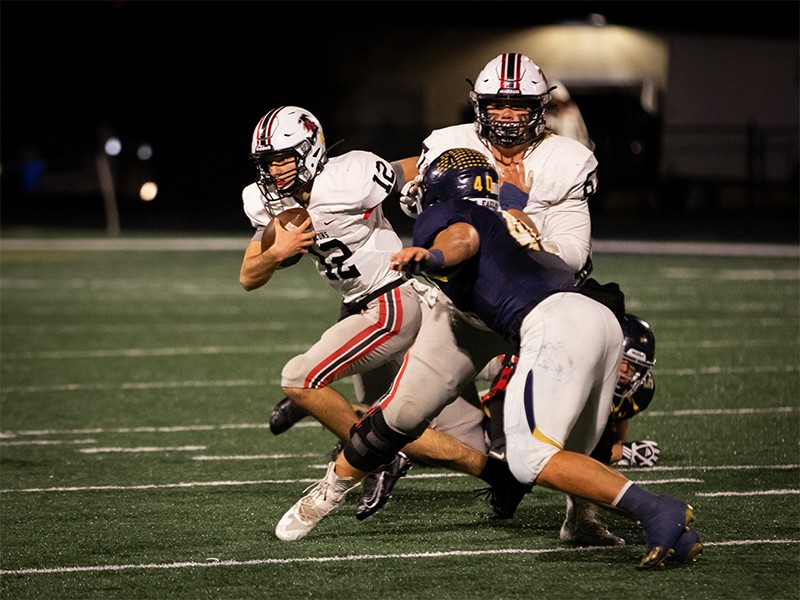 Flowery Branch quarterback David Renard tries to get away from a Marist defender in the Falcons' 24-0 loss to the War Eagles in Atlanta.
Photo/Seth Chapman 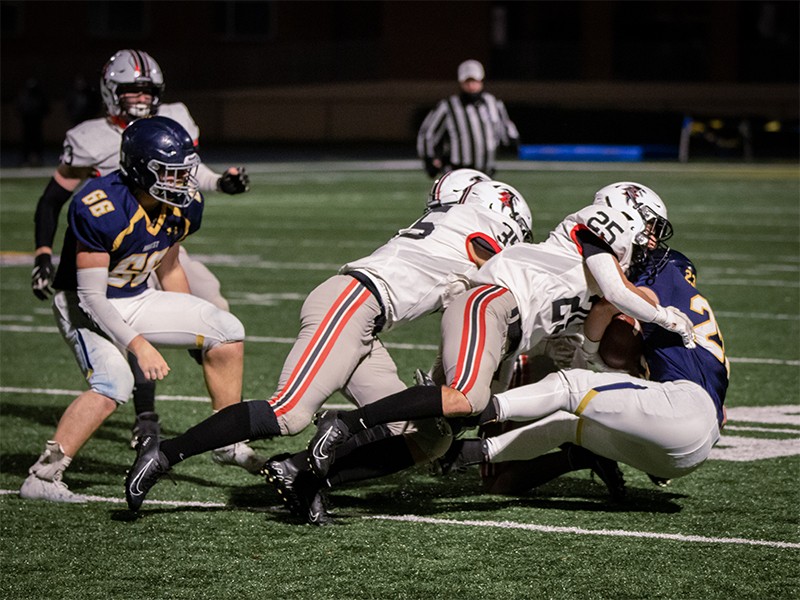 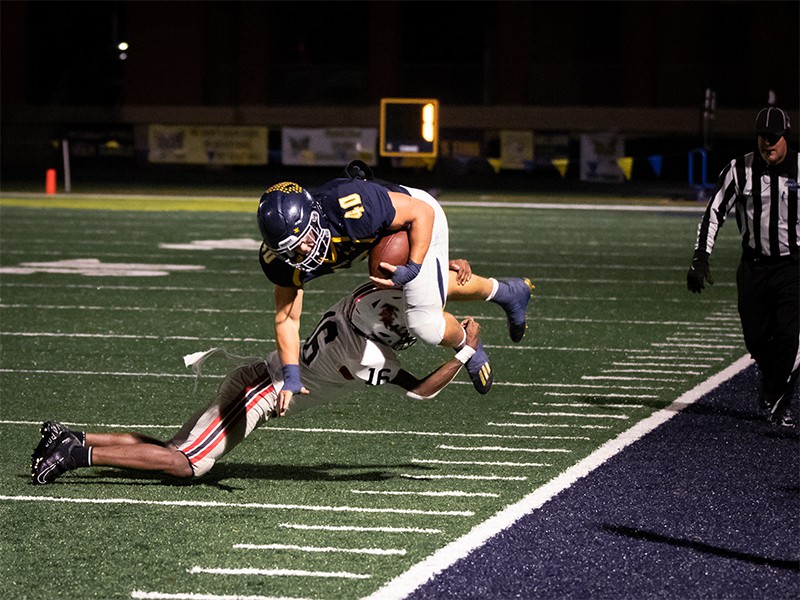 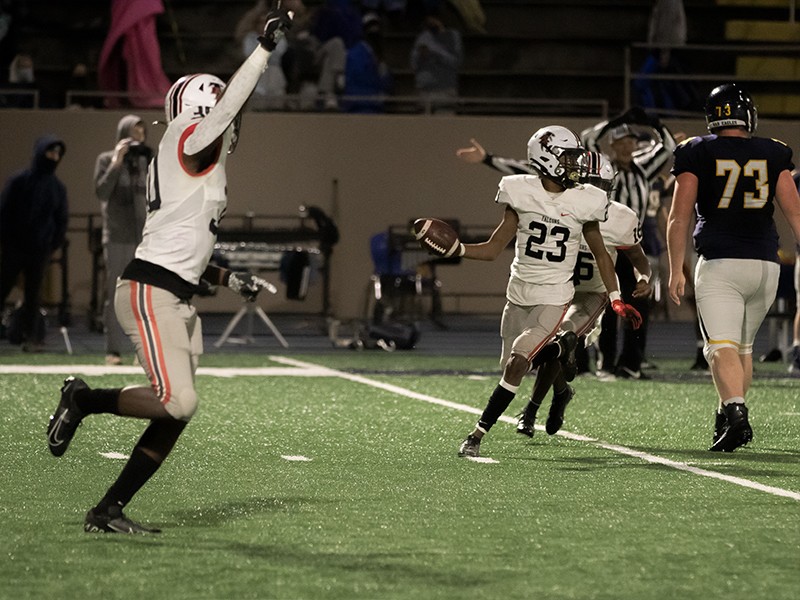 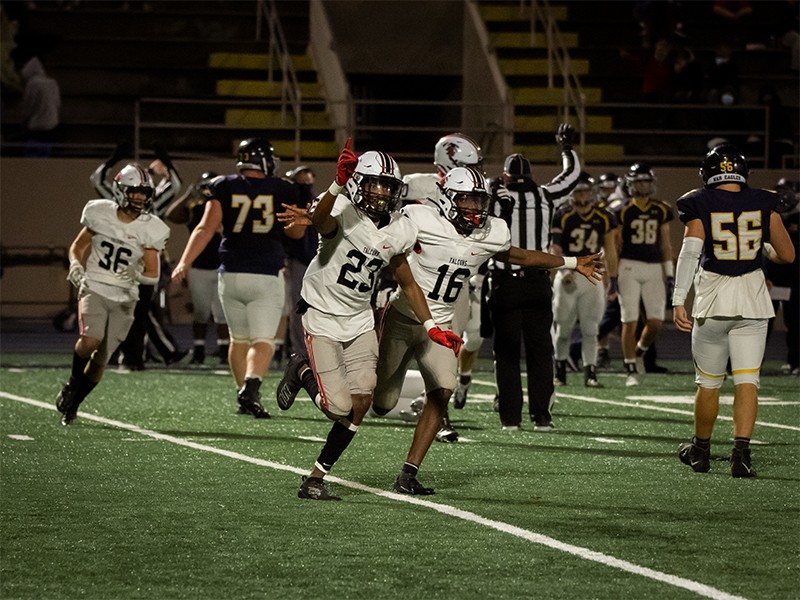 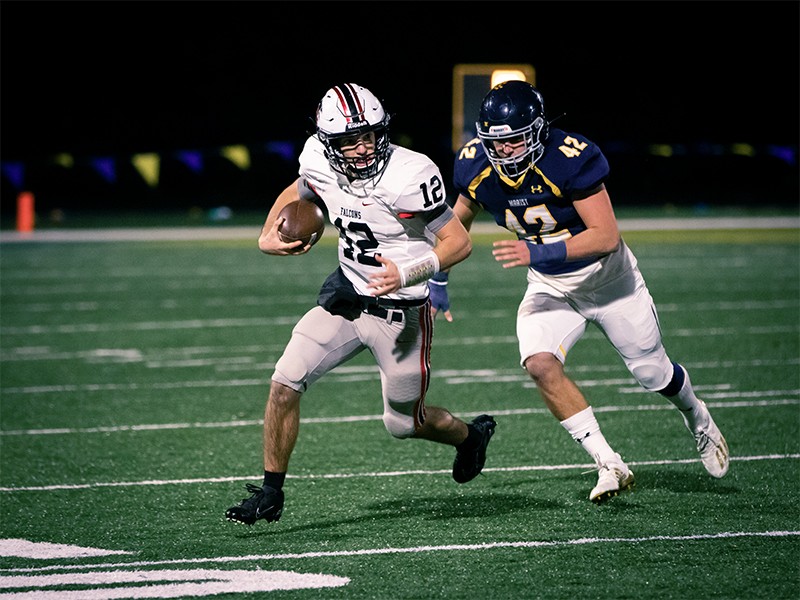 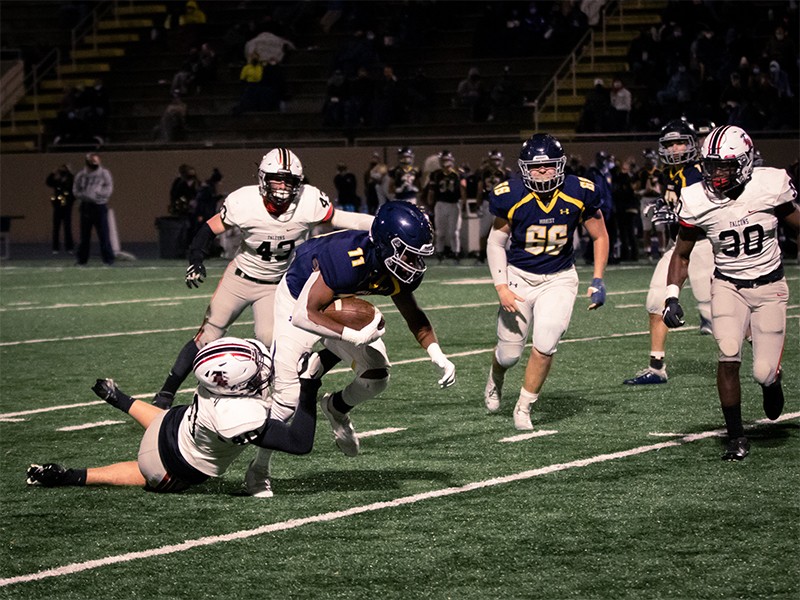 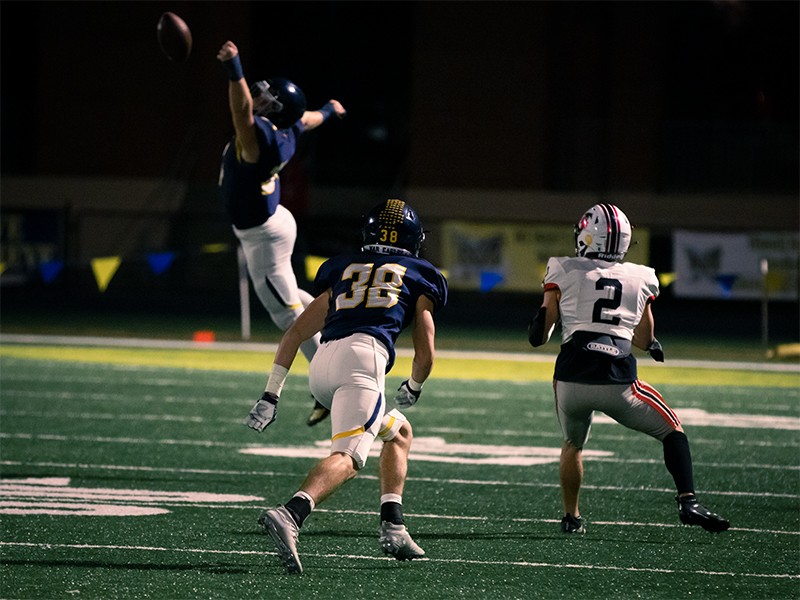 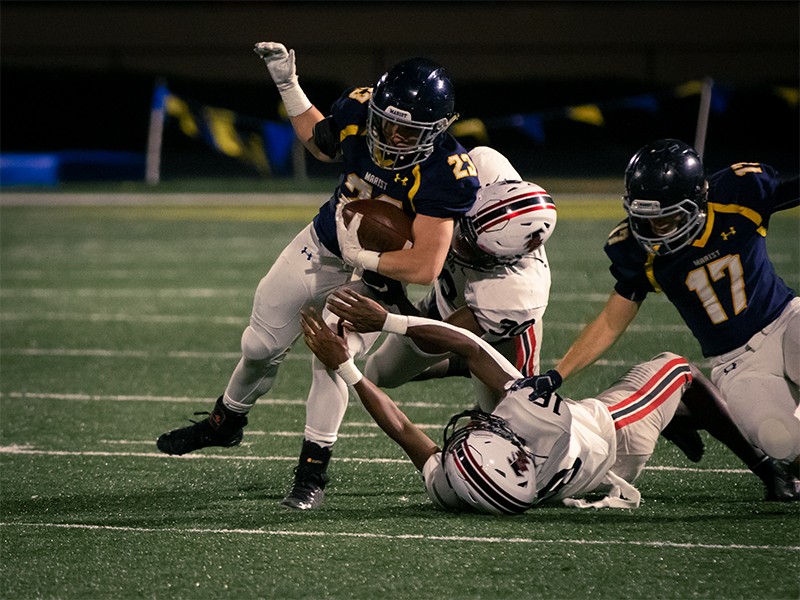 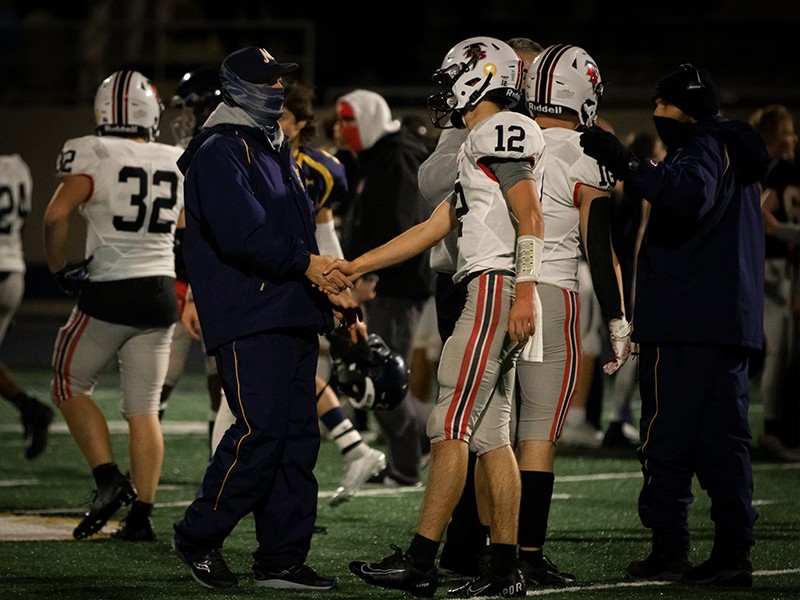 ATLANTA — Marist’s defense is as good as advertised.

The No. 1 War Eagles (10-0) shut out Class 4A’s second-ranked offense en route to a 24-0 win over Flowery Branch (9-3) in the second round of the Class 4A playoffs Friday night at Hughes-Spalding Stadium

It was déjà vu all over again for the Falcons, dropping their third straight in the series in a physical, grinding battle. The only difference, it was not a region contest but a playoff game.

“We battled to the end,” Flowery Branch coach Ben Hall said. “I’m proud of this team. They’ve grown up tremendously, and we’ve got a lot to build on”

The Falcons tried everything to get the offense going, but a nasty headwind hampered the passing game and a physical, blitzing Marist defense didn’t help any as well.

“The conditions were not ideal for us early, throwing into that head win in the first quarter kind of put us behind the chains,” Hall said. “They’re good defensively,” Hall said. “They brought more than we could block at times>

Marist’s defense held the Falcons to 195 total yards of offense while rushing as many as they could get away with. They sacked Falcons’ quarterback David Renard twice, hurried him several times and tackled him for losses four times.

But Renard still made plays, despite the pressure and windy conditions, connecting with Connor Larson on a 27-yard pass and 14-yard pass, also hitting big plays to Sal Sengson and rushing for 56 hard yards, including a 15-yard run on fourth-down-and-long to keep the offense alive.

“We didn’t connect on some of the 50-50 balls and got behind them,” Hall said. "But David Renard has battled for us all year. We wouldn’t be in this position without him. I don’t know if I’ve had a player that has improved as much as David Renard has in 12 months.”

Branch’s defense was pretty good as well, holding Marist well below its scoring average of 39 points per game and to just 256 total yards of offense.

“The defense played lights out,” Hall said. “We gave up that toss pass there in the second quarter, I mean, Marist is going to score. We just couldn’t put enough first downs together offense going.  I’m proud of the way this defense has grown and I’m looking forward to the future.”

The game started slowly with both squads trading punts. Marist, however, pulled out the old half-back pass to strike the goose egg off the scoreboard last in the first quarter. Champ Davis pitched it to Ian Otten on what looked like a sweep play, but Otten stopped and fired to a wide-open Thomas Rollauer on a 16-yard. After the Dawson Jones extra point, the War Eagles were up 7-0 with 1:19 to go in the opening quarter.

The War Eagles’  Rollauer converted a fourth-and-1 with a 24-yard run down to the Branch 10 which led to their second touchdown. Lincoln Parker scored a couple of plays later on a one-yard dive to push the Eagles ahead 14-0 with 1:00 left in the half. Jones added a 24-yard field goal late in the third quarter and George Parker tacked on a late touchdown on a 16-yard run.” 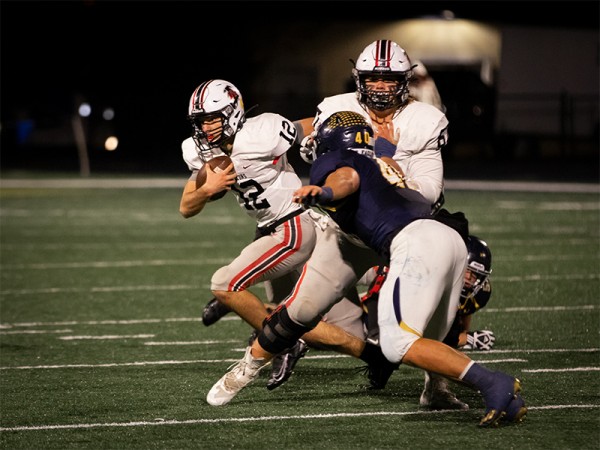 Marist defense too much for Falcons in 24-0 loss
The No. 1 War Eagles (10-0) shut out Class 4A’s top-ranked offense en route to a 17-0 win over Flowery Branch (9-3) in the second round of the Class 4A playoffs Friday night at Hughes-Spalding Stadium
Sports 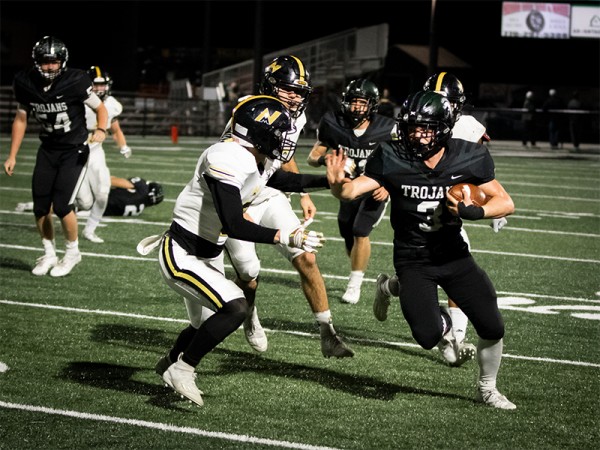 Gaining the Edge: Howell & Co. lead North Hall to 2nd round
North Hall has overcome all the doubters this season to advance into the second round of the Class 3A playoffs.
High School Sports

Supreme 2nd round matchups will dominate Jacobs Media airwaves
With the first round of the Georgia High School Association playoffs complete, eight teams in our northeast Georgia overage area advanced to the second round and are still alive in their quests for state titles. Jacobs Media will provide action for nearly half of them with our three radio stations and live streaming...

5 Things: What we learned from the first round of the high school football playoffs
Overall, eight of the 14 teams in Northeast Georgia to make the playoffs advanced to the second round over the weekend.

Branch rolls into 2nd round with rout of Luella
Flowery Branch wasted little time in jumping on Luella. In fact, it took just 7 seconds for the Falcons to take a quick lead that would eventually turn into a 40-7 victory in the two teams Class 4A first-round playoff game at Falcons Field Saturday night...
Friday Game Night

2nd round previews: Area teams try to buck trends in 2nd round
Only eight teams from the northeast Georgia area managed to navigate into the second round of the Georgia High School Association playoffs last week...
By Jeff Hart 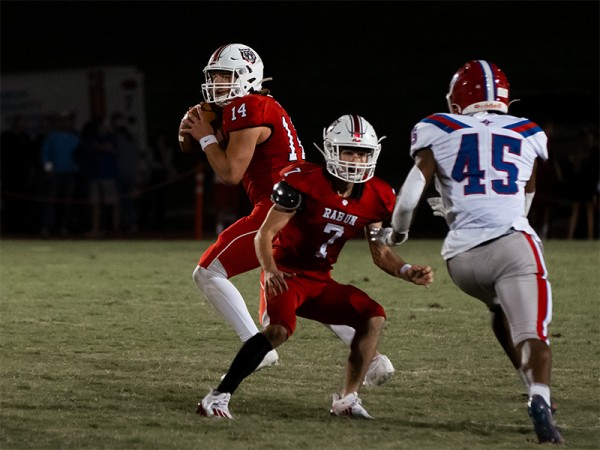 Q&A with Rabun County's Jaybo Shaw: "Mature" Wildcats look to continue run
Rabun County enters the second round of the playoffs in exactly the position they expect to be each season: at home and playing as one of the top contenders in Class 2A.
By Caleb Hutchins