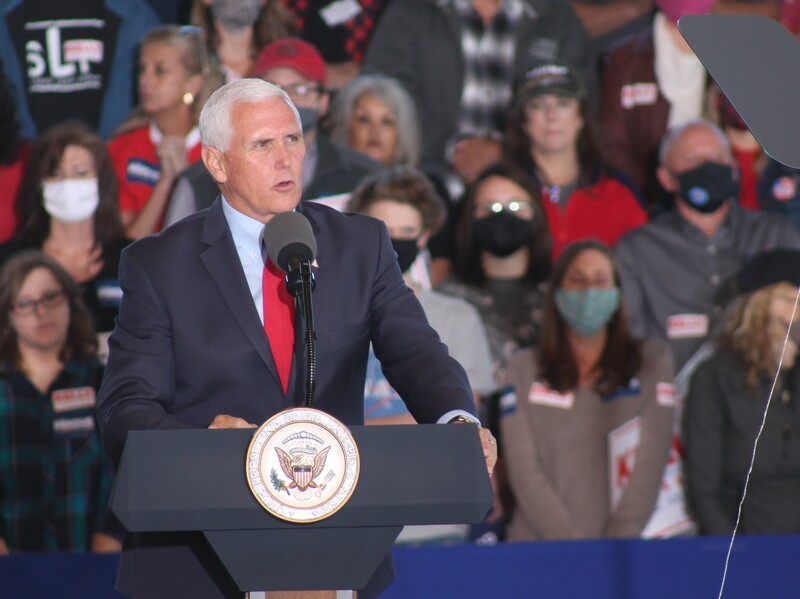 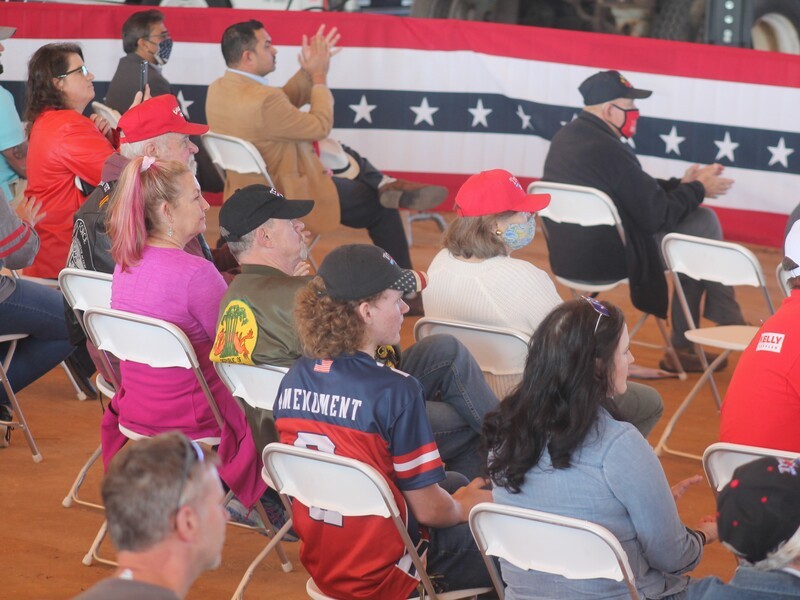 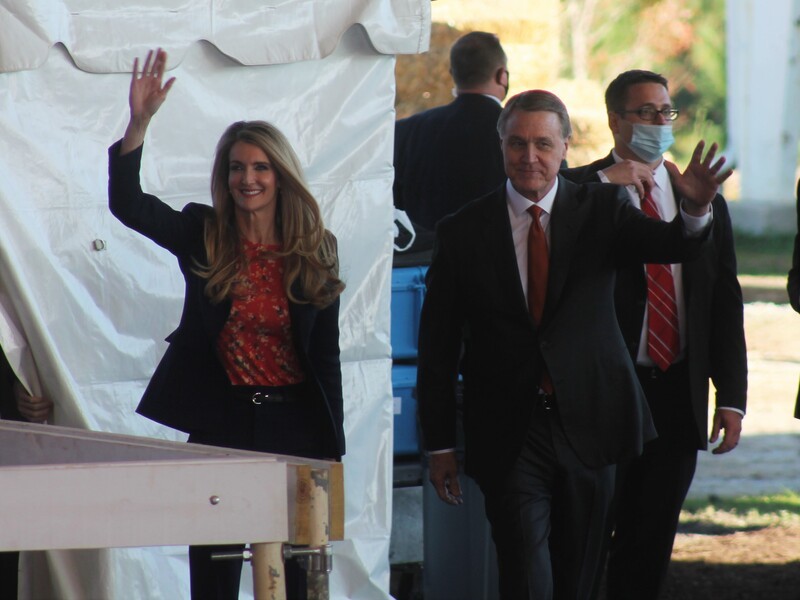 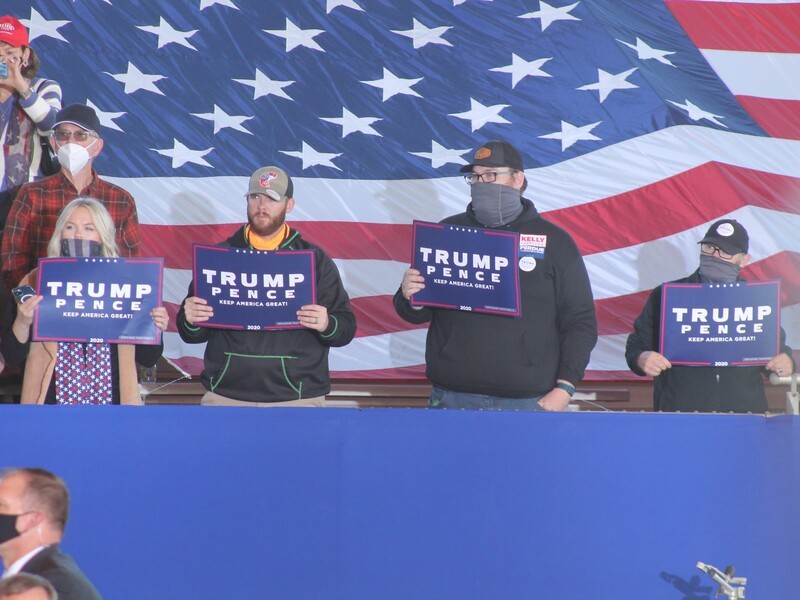 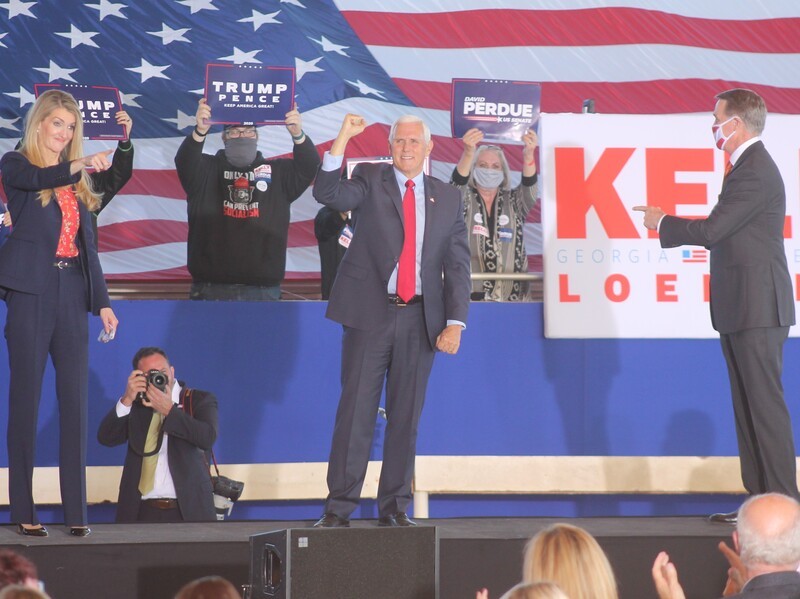 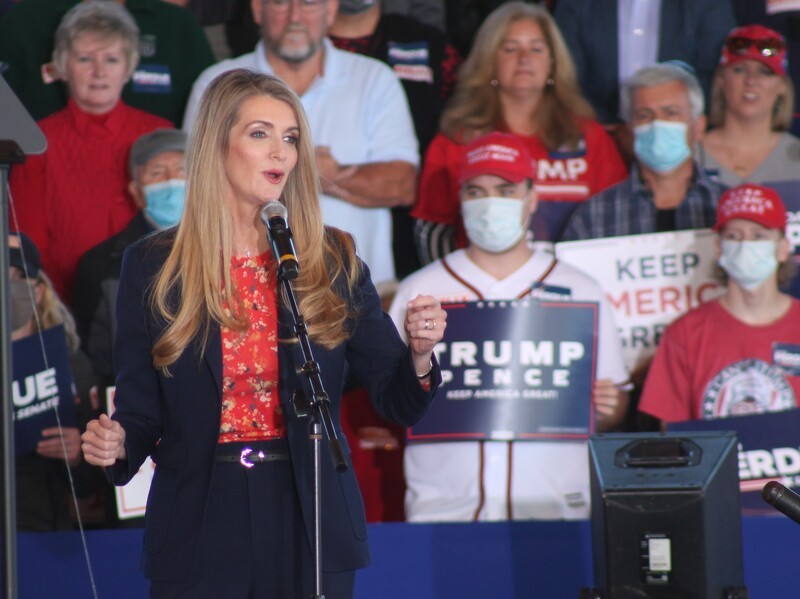 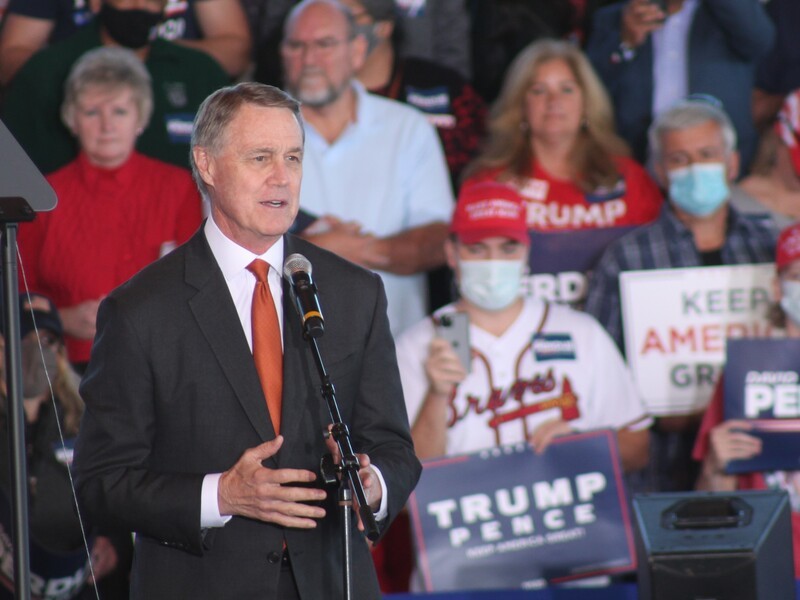 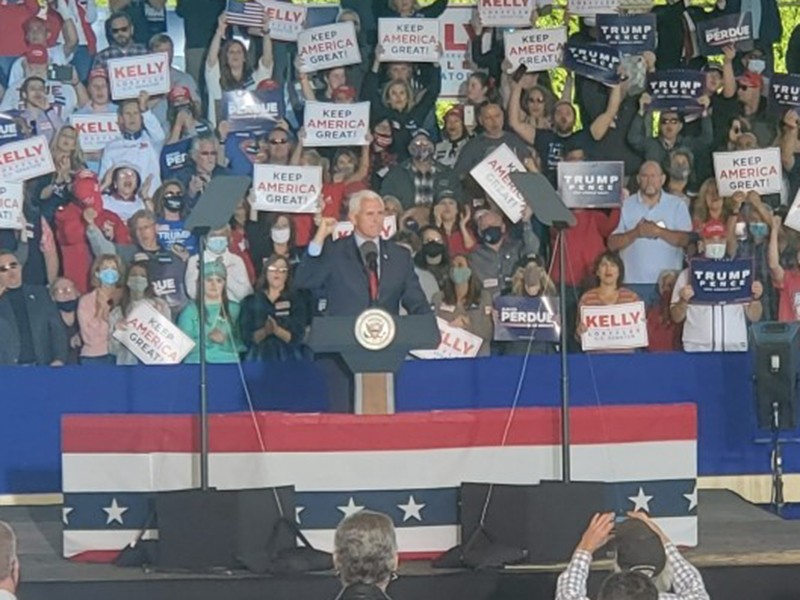 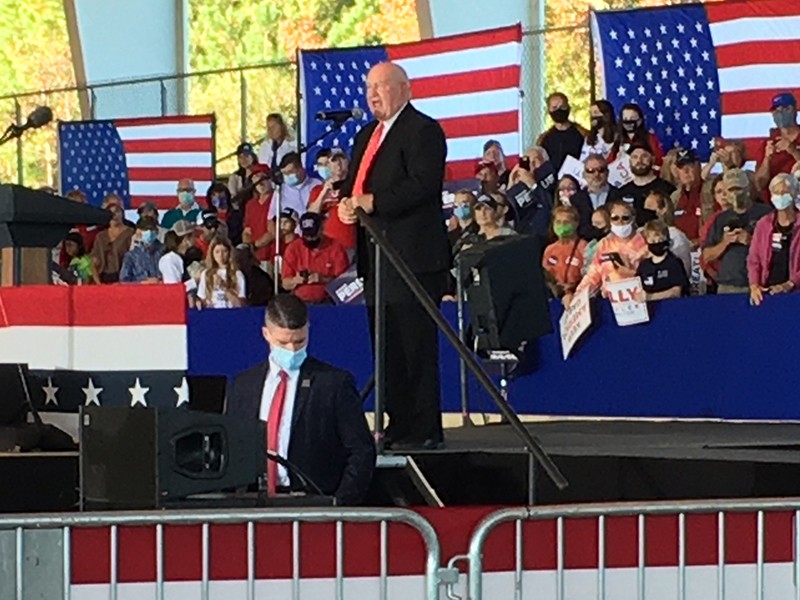 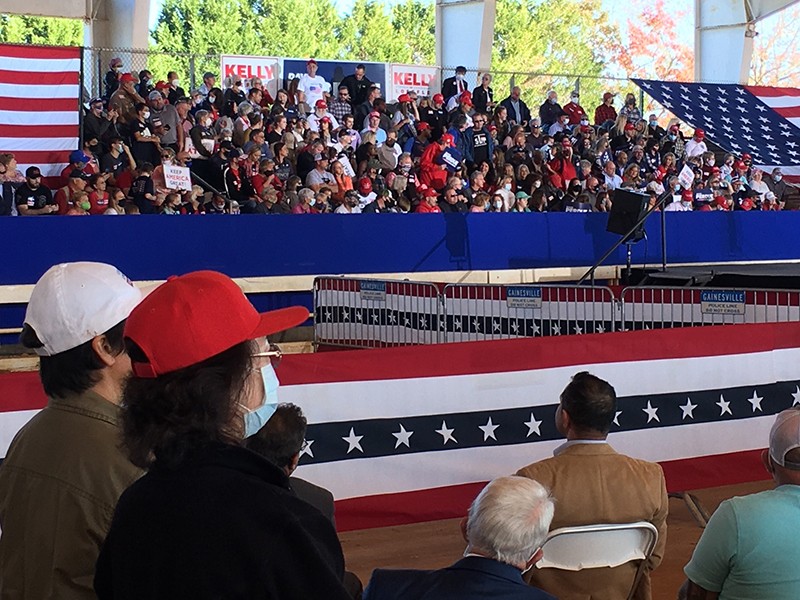 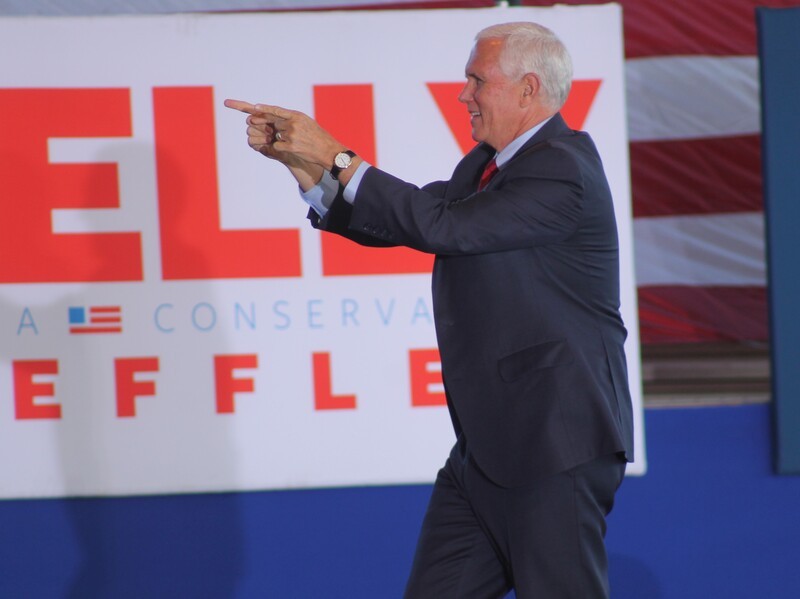 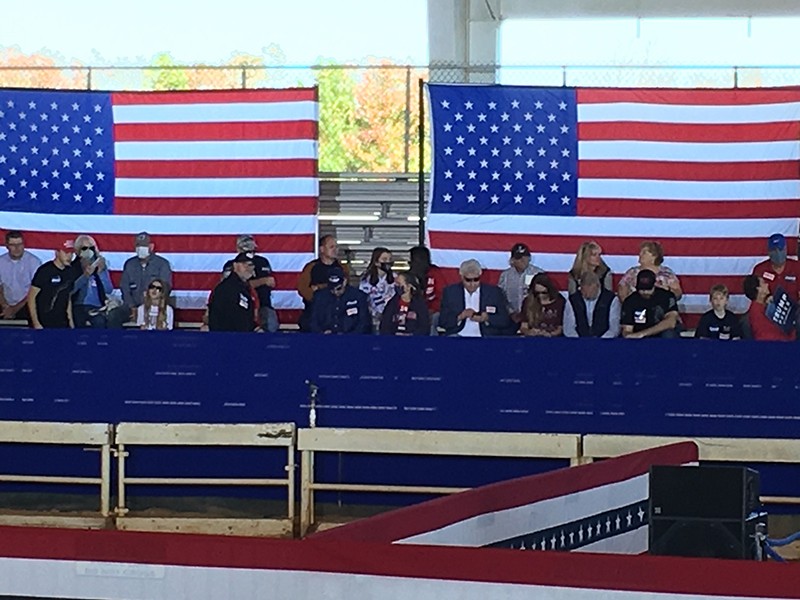 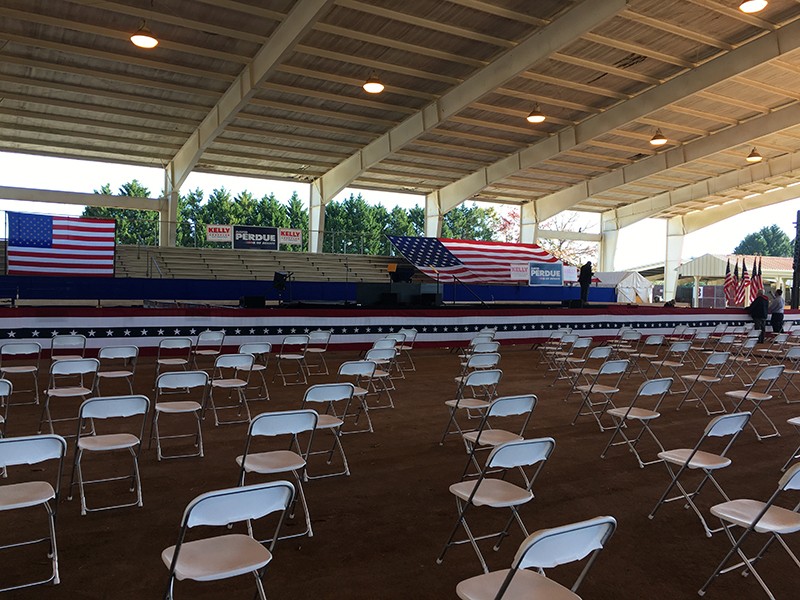 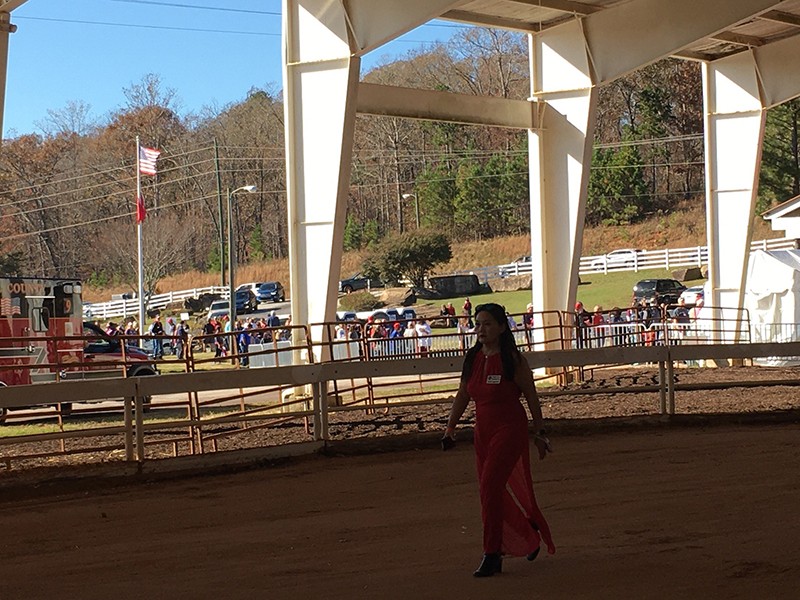 Vice President Mike Pence and Georgia Senators Kelly Loeffler and David Purdue were treated to a full crowd of supporters Friday afternoon at a Defend the Majority Rally at the Chicopee Agricultural Center in Gainesville.

Pence started the day off at a rally in Canton, GA, but made his way to Gainesville around 3:30 p.m. in support of Loeffler, Purdue, and Georgia Public Service Commissioner Bubba McDonald leading into the January 5, 2021 runoff election.

By 1:45 p.m., a line of supporters had already formed outside of the agricultural center, nearly an hour and a half prior to the event’s start. Upon entering the arena, guests went through a security check and were then able to choose a seat in the bleachers directly behind the stage, or in chairs in front of the stage.

The crowd in the arena was particularly high energy, and it is no wonder that was the case. Pence’s visit to Gainesville marks the first time a president or vice president has visited the Gainesville area since George H.W. Bush visited in 1992.

Ben Clark, who attended Pence’s rally, said he was at George H.W. Bush’s rally in 1992 and was excited for the opportunity to see Pence.

“It’s awesome. I love it. Any opportunity to see the acting vice president is a wonderful thing,” Clark said.

Mike Dorough, a local pastor, attended the Defend the Majority Rally with his son John Dorough. Mike Dorough said he was excited to see Vice President Pence in Gainesville.

“I think it’s a great honor to have him come, we don’t live very far from here and this is the most important runoff in our lifetime,” Mike Dorough said.

Once the event started, the energy in the crowd was evident. Throughout the rally, the crowd cheered and clapped when the key names took the stage. Aside from Pence, Loeffler, David Perdue and McDonald, former Georgia Governor and current United States Secretary of Agriculture Sonny Perdue also took to the stage during the rally.

At multiple points, chants began to spread through the crowd, including “U-S-A,” and “Four more years.”

“You know the first word that comes to my mind is passion. He loves what he’s talking about, he’s committed to it, he’s got a lot of passion,” Ash said.