Pence urges Gainesville crowd to “stay in the fight”, vote for Loeffler and Perdue 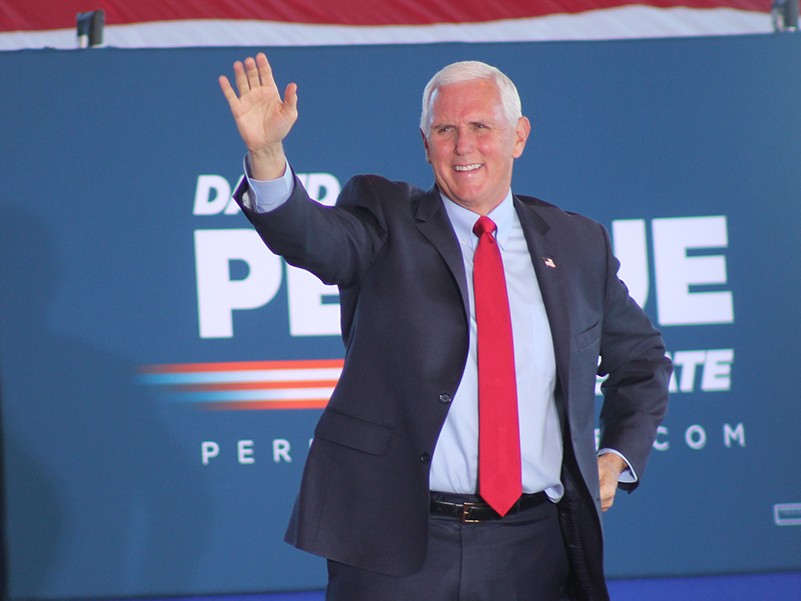 Vice President Mike Pence waves to a packed crowd at the Chicopee Agricultural Center in Gainesville this afternoon while campaigning with Senators David Perdue and Kelly Loeffler.
Contact Editor

Vice President Mike Pence had Georgia on everyone’s mind when he issued a fiery message to a packed arena at Chicopee Agricultural Center in Gainesville on Tuesday.

Perhaps the most passionate part of Pence’s speech came when he told the crowd the reason for his visit, which along with supporting sitting Senators David Perdue and Kelly Loeffler in their bids for their seats, was to encourage the state’s residents to keep fighting for their conservative values.

Pence made his comments as the runoff elections for Perdue’s and Loeffler’s senate seats are set for January 5. The two elections have captured the attention as the nation as the results will determine which political party will control the U.S. Senate.

Throughout his speech, Pence pointed out how the efforts of Perdue and Loeffler have supported the work of himself and President Donald Trump. Pence drew comparisons between the views of the two senators and those of the Trump Administration.

On the opposite end of the spectrum, Pence warned the crowd how victories for the opponents of Perdue and Loeffler, Jon Ossoff and Raphael Warnock, respectively, will lead to the breakdown of these values across the country.

“Jon Ossoff and Raphael Warnock are wrong for Georgia and wrong for America,” said Pence, as the crowd began to cheer. “That’s why we need Georgia to say no to Ossoff and Warnock and yes to Senator David Perdue and Senator Kelly Loeffler!”

Pence echoed the thoughts of Perdue and Loeffler, who took the stage to address their supporters prior to the vice president’s arrival.

Both senators warned how Georgia’s elections are the last chance to defend the nation against liberal beliefs.

“We are the last line of defense for America, what do you think about that Georgia!?” Perdue exclaimed, as the crowd cheered and waved signs in support of himself and Loeffler.

When Loeffler spoke after Perdue, she posed a similar question, asking the crowd, “Gainesville, are we ready to show America that Georgia is a red state?? We are the firewall to socialism in America and we are gonna hold the line right here in Georgia!”

In a surprising move, Loeffler also praised and thanked former opponent, U.S. Representative Doug Collins, for his support following the general election. The two candidates engaged in a bitter battle for the seat before Collins ultimately conceded to Loeffler the night of the election.

“I have to thank Congressman Doug Collins and his support…because as conservatives we are uniting across the state to get this job done to show the world that Georgia is a red state,” said Loeffler.

Loeffler, Perdue and Pence each mentioned Collins specifically in their speeches, stating that he has been a source of support for each of them and the Trump Administration.

Pence also emphasized the accomplishments of President Trump during his term, both domestically and internationally. In a final push at the end of his speech, Pence testified of his own faith in God and encouraged the crowd to have faith, too.

Addressing the crowd, Pence said, “Have faith in our president…have faith in leaders like David Perdue and Kelly Loeffler…have faith in the people of this great state…and finally, I’d encourage you to have that other kind of [religious] faith, as well.”

Pence campaigned this afternoon with Perdue and Loeffler in Canton and then Hall County as a part of a bus tour. The vice president was expected to return to Washington D.C. this evening.