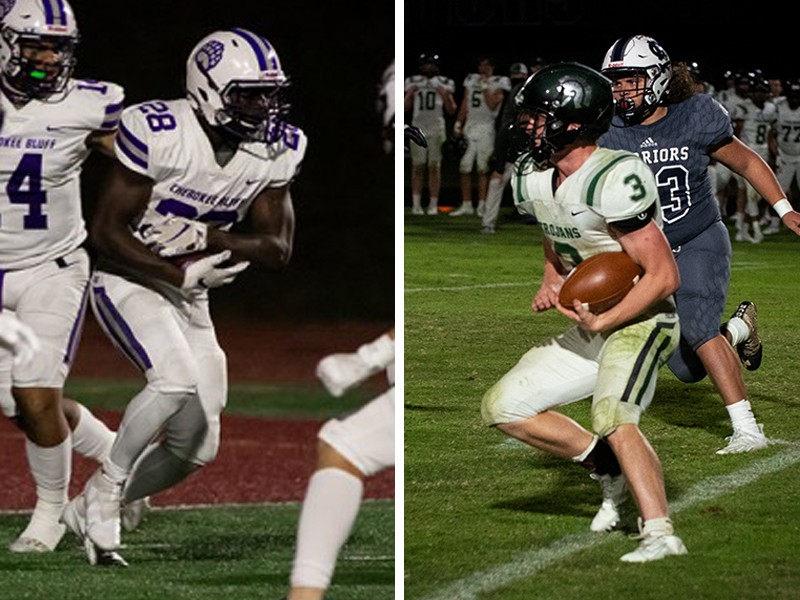 It’s kind of a Cinderella story with two Cinderellas.

There are no glass slippers or sparkling dresses in this story, however, just a 3-year-old football program and what was thought to be a rebuilding program both on the hunt for the Region 7-3A title.

No one expected North Hall to be in the conversation for a Region 7-3A title this year, not even coach David Bishop.

But he did expect his team to make a game-by-game improvement, and that’s exactly what he and his staff have gotten out of this group of Trojans in this weird, tiring COVID-19 season.

Now, a program decimated by graduation, fought through individual COVID-19 quarantines, a boatload of brand-new talent all over the field and started the season 0-3 is just two wins from claiming the region title and a No. 1 seed in the Class 3A playoffs.

“To be quite honest with you, no,” Bishop said about being in the race for a region title. “But I always felt like we had a good chance of playing good football late in the season and knew we would get better. Where we stood, I don’t know. I felt like playoffs would be a great success for us and a home playoff game would be an even bigger success. Being where we are at right now, we are still playing for both of those – a region championship and home playoff game. So, it’s kind of neat to be where we are right now.”

Cherokee Bluff coach Tommy Jones is not surprised, at all, with the fast resurgence of the Trojans this season.

“Not at all,” he said. “I think most people understand how good they are, also understand why they’re in this position. They were playing a lot of young guys early in the season and those guys have matured and continued to get better. Coach Bishop and his staff do an excellent job of figuring out what they’re good at and, sometimes, that takes a handful of games to get it going and to figure that stuff out. It’s not a surprise where they are right now. It’s where we expected them to be.”

Nevertheless, Cherokee Bluff is part of this double Cinderella story. Entering the 2020 season, the Bears had only three wins in the short program history. But this year, the Bears are undefeated and are eyeing their first region title.

“We are excited to play in a big-time meaningful game in November,” Jones said. “We know the task is pretty tough this week.”

It’s a game with plenty on the line as the Trojans roll into Bluff on Friday in a battle for the lead role in Region 7-3A. Kickoff is set for 7:30 p.m. and can be heard live on AM 550 WDUN.

If the Bears win, they take the region title trophy home. If the Trojans win, they’ll host Dawson County next week for the No. 1 spot. It’s just a little added drama to the night’s action.

“There’s a lot to it," Bishop said about the region race. "The only way we can win the region is for us to win two, and I think that we’re the only team, somehow, that works for mathematically. Even if Cherokee Bluff were to lose, they still have a way to get in and be region champs, so all’s not lost for them. I think, the way we have it figured out, it is for us. So, we’ve got to play our best game and try not to think about the little things like that. It’s a big game. As we told the kids this week, let’s be humble and grateful for where we are and the fact, we’re able to play on Friday nights and grateful for the position that we’re in.”

The Bears enter Week 11 coming off a 28-27 win over Dawson County in Dawsonville last week. Bluff running back Jayquan Smith was a huge factor, rushing for 316 yards and four touchdowns. He’s the focal point of this Bears’ offense, rushing 84 times for 764 yards and 10 touchdowns. Charles Tolbert also has been solid with 442 yards on 58 carries and eight scores.

“He’s a tremendous talent,” Bishop said about Smith. “He does break tackles and can take it to the house at any given time. Those are the things that make him a special back."

“We are built a little bit inside out,” Jones said. “But we also understand that offensively what we need to do to be successful each week is to take advantage of what our opponents give us. Last week, we felt like the best opportunity we had to win was to run the football. That hasn’t been the case every week this year. We know we need to be balanced and be effective when we throw it, not just when we have to, but when we want to. We have to be able to execute at a fast rate of speed.”

Defensively, the Bears are giving up 7.5 points per game, sixth-best in Class 3A, and will shift from playing against an explosive Dawson County passing team in Week 10, to guarding the misdirection of North Hall’s iconic wing-T ground attack this week.

Defensive ends Mateo Guevara and Myka Sims, and noseguard Dylan Roberts will be focused in the trenches, while linebackers Garrett Davis, who leads the team in tackles with 54, Eric Gohman (25 tkls), Eli Little (22 tkls) and Brayden Nance (53 tkls) will be the second level of defense.

“It's a totally different challenge than last week," Jones said. "Dawson was extremely explosive in the air. North Hall is extremely explosive and makes equally as many big plays on the ground. The [Clark] Howell kid is running the ball exceptionally well. He’s tough, physical and fast. He does a very good job with the ball in his hands, and they’ve got a lot of confidence with him. They are so disciplined. They make you pay if you’re not playing responsibility football – you’re not where you need to be.”

The Trojans' offense has propelled them to a five-game winning streak, averaging 38 points and 300 yards rushing per game, behind a stout ground game. Clark Howell has been the guy with the most totes for the Trojans, 158 carries for 1,259 yards, fourth in the state, and Kevin Rochester has been his wingman. Rochester is the team’s second-leading rusher with 99 carries for 624 yards and eight touchdowns.

Bishop said the jumpstart after the 0-3 start is attributed to a few big changes they made to the offense.

“Some of those were making Clark the featured guy,” Bishop said. “That has been the bigger asset for us than anything else. We knew he was going to be the biggest producer that we were going to have. We had been utilizing a right and left halfback and they pretty much shared carries. Early in the season, that’s what we had, so we knew we couldn’t continue to do that to give our kids a chance. So, we felt like Clark has to touch the ball more than anybody on the field. He’s in almost every package that we have. He’s definitely the featured guy. We believe that heavily in him.”

Likewise on defense, it has gotten better over the last six weeks, shaving off more than 10 points given up per game. Bishop said a focus on fundamentals has been the key to the improvement.

"It's just about being about the fundamentals," he said. "When you do it over and over again, you're going to get better. The biggest thing about playing them is we’ve got to make sure we play assignment football. We are going to have to play very good sound, fundamental defense. ”

Rochester, Jarrett Latty, Howell, Austin Atha and Jeremiah Telander, the team's leading defenders, will be key in slowing down the Bears’ offense.

“There are some things they show that they’re really good at and you have to make tackles,” Bishop said. “You have to be where you’re supposed to be. Stopping them is going to be us taking care of our job and doing what we need to do.”