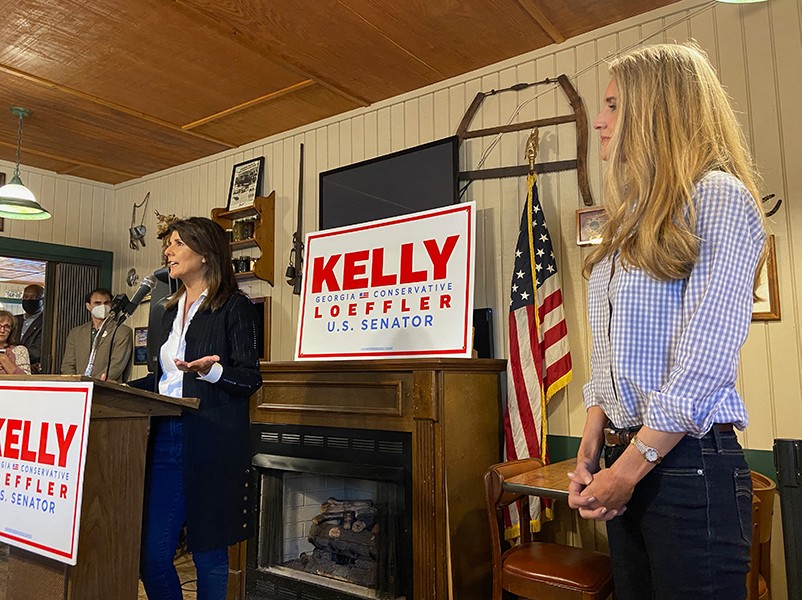 Nikki Haley, former South Carolina governor and ambassador to the United Nations, issued her support for U.S. Senator Kelly Loeffler this morning during one of Loeffler’s campaign stops at Curt’s Cafeteria in Oakwood.

Haley said that Loeffler has delivered on everything she promised to do since her appointment.

“Georgia she [Loeffler] has not let you down, she has done exactly what she promised she would do,” said Haley.

Haley said that the upcoming general election on November 3 is a critical election for Georgia and the entire U.S., as there is a stark contrast between conservative Republicans and liberal Democrats.

Haley spoke on her experience as ambassador to the U.N. too, recounting scenes from war-torn South Sudan and seeing starving citizens in Venezuela.

“If there’s anything that I leave with you today, it’s that on our worst day, we are blessed to live in America,” Haley said.

Loeffler addressed the packed crowd at Curt’s after Haley and promised to remain strong on her conservative stances of pro-life, pro-Second Amendment and supporting law enforcement.

“We should not ever be silenced for speaking up for conservative values,” said Loeffler. “I went to Washington to work for you, to be your voice, I can’t be bought…I am only there to be your voice.”

Loeffler also said that is she proud to have recently led the effort to confirm Supreme Court Justice Amy Coney Barrett.

“I led the charge, [I was] the first senator to say let’s get this done,” said Loeffler.

Georgia Insurance and Safety Fire Commissioner John King joined Haley and Loeffler this morning at Curt’s. Haley is scheduled to appear as a guest with Loeffler this afternoon as well in Monroe and McDonough; these stops are a part of Loeffler’s third tour of Georgia.

Loeffler faces off against nineteen other candidates in the special election on November 3.