North Hall runs past West Hall in 7-3A openers 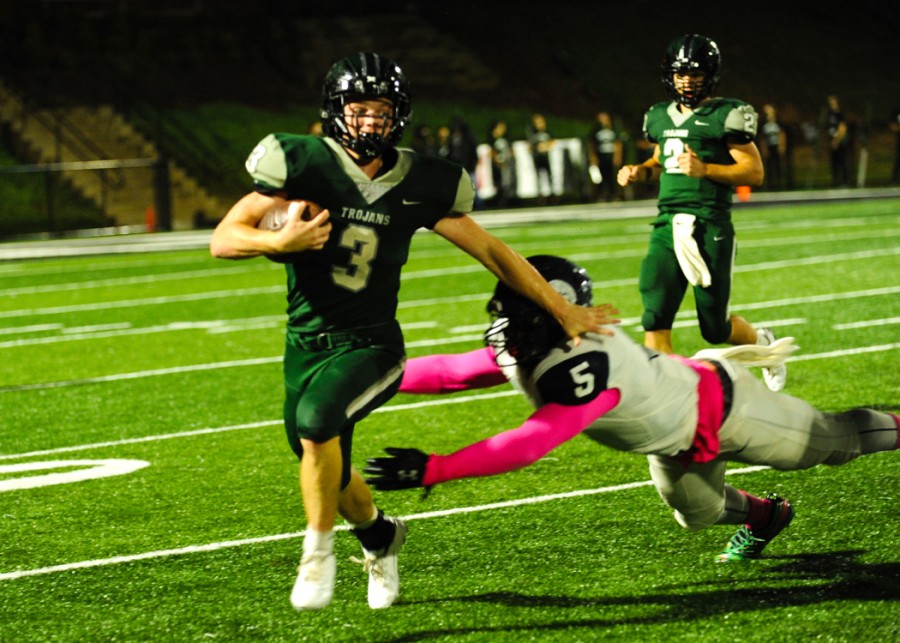 North Hall's Clark Howell breaks a tackle for yardage during Friday's game against West Hall. Howell had 173 yards rushing and scored 4 TDs in the Trojans' 42-13 win over the Spartans at The Brickyard.
Photo/Jim Haynes
Contact Editor

GAINESVILLE — Region 7-3A take notice. The North Hall wing-T is operating under full power once again.

Clark Howell churned out 173 yards and scored four times to lead the Trojans to a 42-13 win over West Hall on Friday night in both teams’ Region 7-3A opener at The Brickyard.

It was also the second straight win for a young but quickly-improving Trojans squad (2-3, 1-0 Region 7-3A) after an 0-3 start to the season. After scoring just 29 points in its first three games (9.6 ppg), North Hall has put up 90 points the last two weeks.

West Hall (2-3, 0-1 Region 7-3A) also was a team coming in with momentum having won two straight and the Spartans took the initial lead on a 39-yard pass from Clayton  Jenkinsto Rodrigo Lopez on the opening drive of the game.

But North Hall reeled off 42 unanswered points into the fourth quarter as it unleashed its resurging ground game.

Howell scored on a 39-yard run on North Hall’s next possession and he added a 3-yard scoring run to open the second quarter. Brad Puryear then connected with Kevin Rochester on a 4-yard touchdown pass to make it 21-7 at halftime.

It stayed that way until early in the fourth quarter. Puryear scored on a 1-yard run and then Howell scored on runs of 42 and 11 yards in a two-minute span to push the lead to 42-7.

Jenkins and Andrew Maine combined for an 11-yard touchdown pass for West Hall in the final two minutes for the final score.

Rochester finished 71 yards on the ground for North Hall, which had just one Puryear interception.

The Spartans were paced by Jenkins who was 16-of-29 passing for 149 yards and two touchdowns. Lopez had another big night catching 11 balls for 115 yards and a touchdown. Josiah Henriques had 92 yards on 10 carries on the ground for West Hall (147 yards rushing total), but four fumbles (two lost) slowed down several Spartans drives.

It doesn’t get any easier for either squad next week. North Hall travels to No. 7 White County while the Spartans play host to unbeaten Cherokee Bluff in region play.