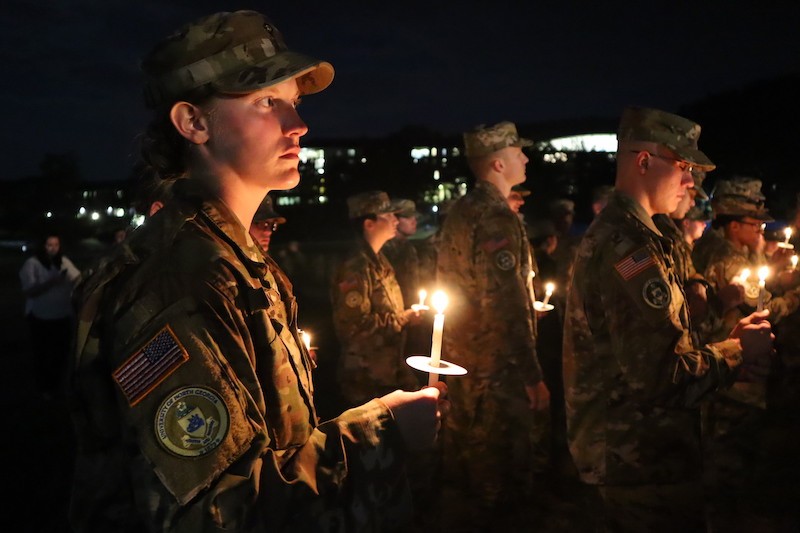 UNG cadets stand at the candlelight ceremony Wednesday night to honor the fallen of Sept. 11, 2001. 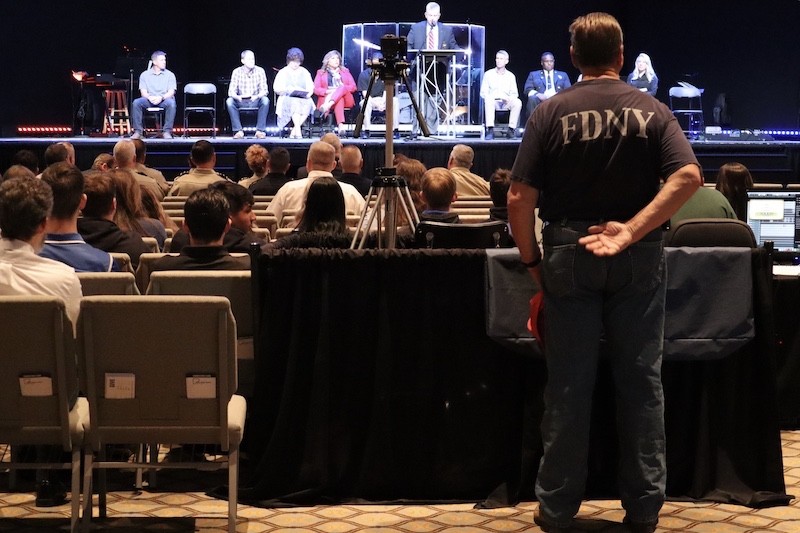 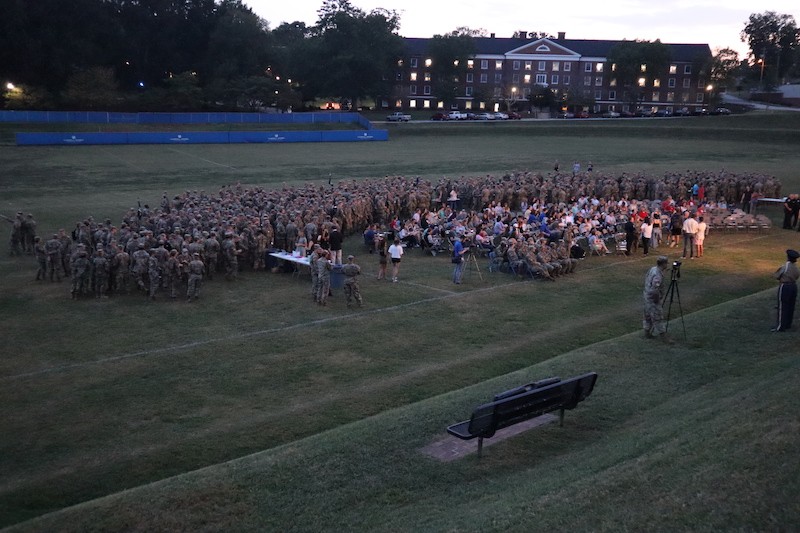 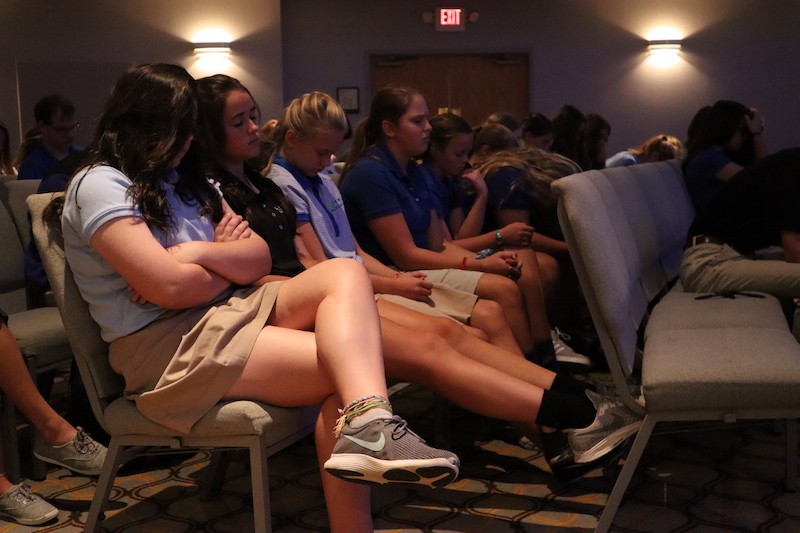 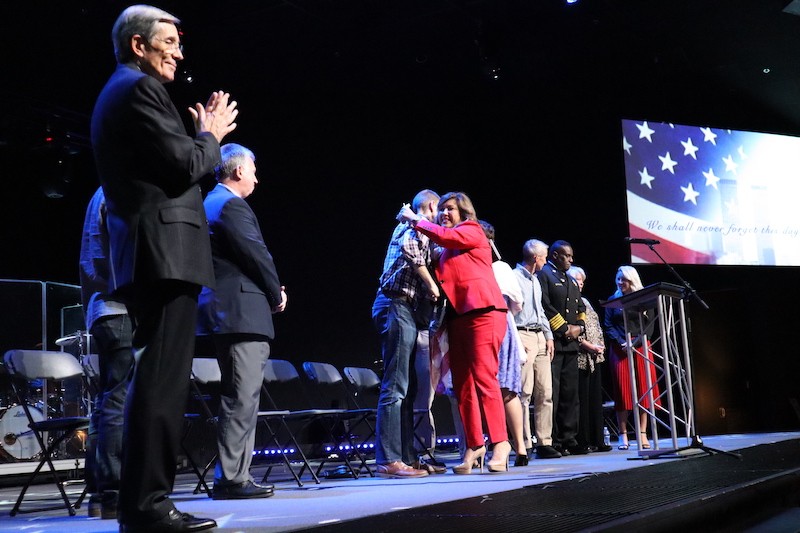 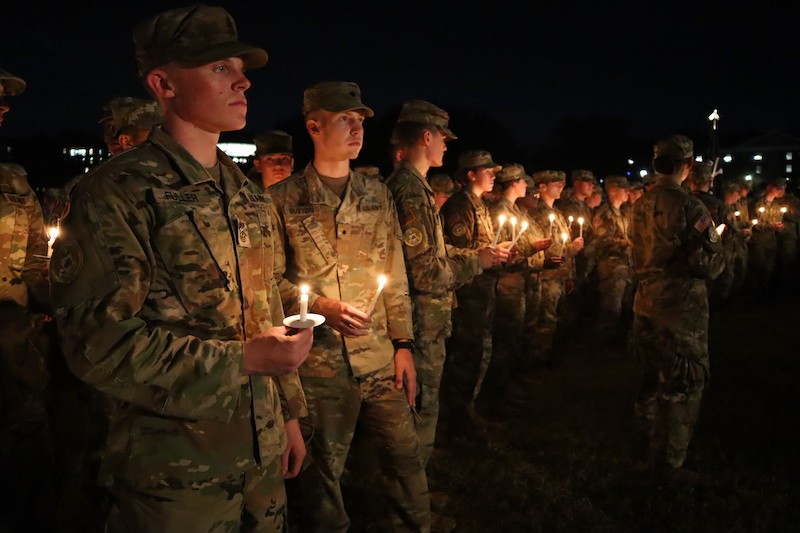 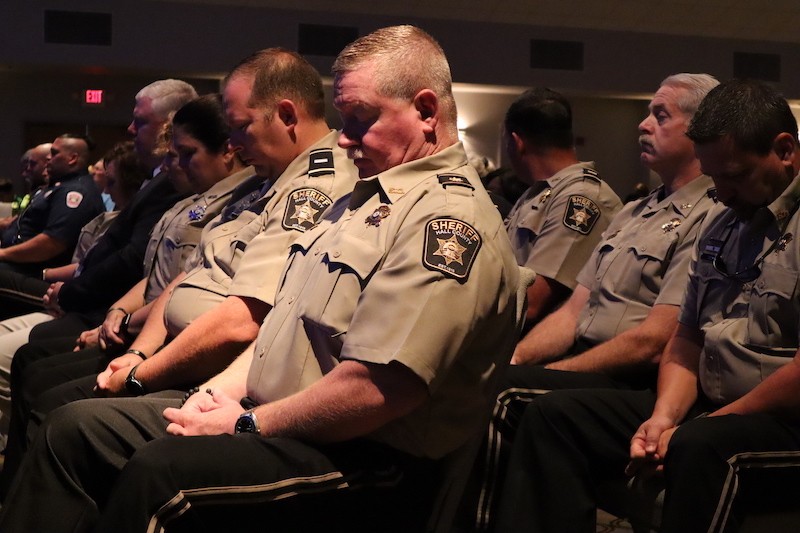 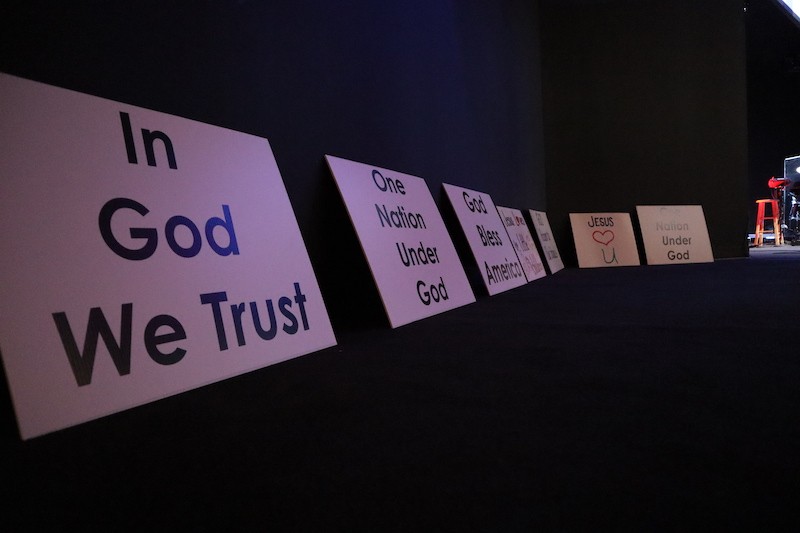 Lanier Christian Academy and the University of North Georgia honored the lives of those first responders and victims who died 18 years ago in the Sept. 11, 2001 terrorist attacks Wednesday.

Once again, another year has passed since the tragic day America fell under attack. What once was two of the country's most iconic skyscrapers, is now a memorial at ground zero honoring the nearly 3,000 people who were killed after terrorists crashed two airplanes into the twin towers, a plane into the pentagon and hijacked United Airlines Flight 93, which hit ground in Pennsylvania.

The ceremony was led by the presentation of colors, a rendition of the song "God Bless the USA" and a video depicting the series of events that unfolded that September morning.

"We cried as we saw people leap to their deaths to escape the flames from inside the towers, and we listened in shock to the phone calls of passengers aboard the planes as they told their families that they loved them one last time...but we resolved that this tragedy would not break us as a nation," Hall County Sheriff Gerald Couch said during an emotional speech.

While the children who were at the ceremony listened to the stories and history behind Sept. 11, the speakers shed light on a first-hand account during a time America endured a historical attack, and for many of them, they channeled their faith in response to the 9/11 horrors.

"It's so important that during these times of what we're going through and what we're facing in every day life, that it's time to put our faith into action and to practice what we preach," Halston Parks, a children's pastor at Free Chapel, said.

Parks recalled her exact location upon learning about the attack 18 years ago as a child sitting in her living room in her pajamas while she was being homeschooled.

"That's why my husband and I are choosing to raise our child to never walk past someone in uniform without thanking them for what they've done for us," she said.

Col. Joseph Matthews, the commandant of cadets at the University of North Georgia, spoke with a heavy heart during Wednesday night's candlelight ceremony at the drill field of the UNG Dahlonega campus. Matthews was stationed at Fort Drum, New York when the planes crashed into the twin towers.

"I saw everyone in the building looking at the TV and I watched the second plane, United Airlines Flight 175 crash into the south tower of the World Trade Center," Matthews said. "I was shocked at what I saw and everyone around me was staring off in disbelief."

UNG holds the 9/11 candlelight vigil annually to honor the innocent lives taken, the first responders who served to protect the people and the eight UNG alumni who gave the ultimate sacrifice while fighting the war on terror, one of which had a funeral at Arlington National Cemetery in D.C.

"I saw many North Georgia graduates that day at Arlington," Matthews said. "We all talked about how much North Georgia gave to us and prepared us for the fight at hand."

The ceremony was hosted by the Student Government Association and included the presentation of colors, a 21-gun salute, taps and the voices of the UNG Patriot Choir. 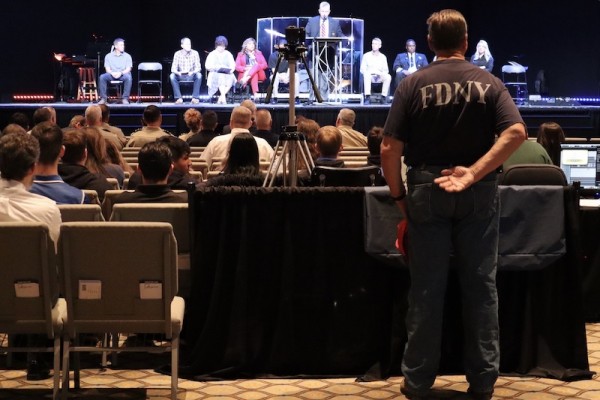 Local schools remember those lives lost on 9/11
Lanier Christian Academy and the University of North Georgia honor the lives of those first responders and victims who died 18 years ago in the Sept. 11, 2001 terrorist attacks Wednesday.

5 people stabbed in Tallahassee, suspect in custody
Authorities in Florida's capital city say a man suspected of stabbing five people at a construction supplies business was an employee who had been asked to leave work because of an incident with co-workers 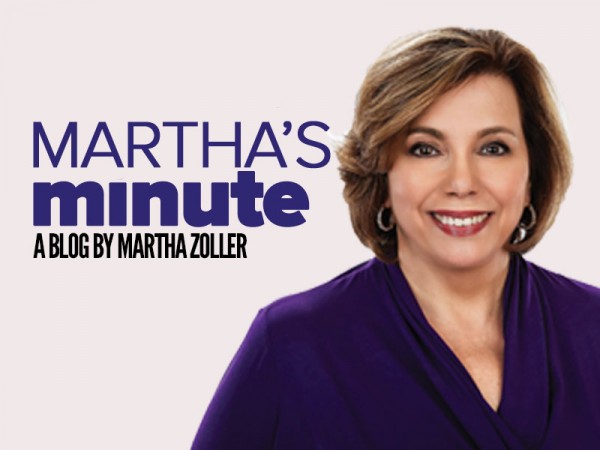 Remembering 9/11
I was hosting Morning Talk with Martha Zoller and Andy Maddox was my cohost that morning. Andy’s brother worked in the financial district of New York. He couldn’t reach him on the phone and later found out he had a meeting in the World Trade Towers at 8:30 am that morning. It was cancelled and he was walking out as the first plane was hitting.
Local/State News 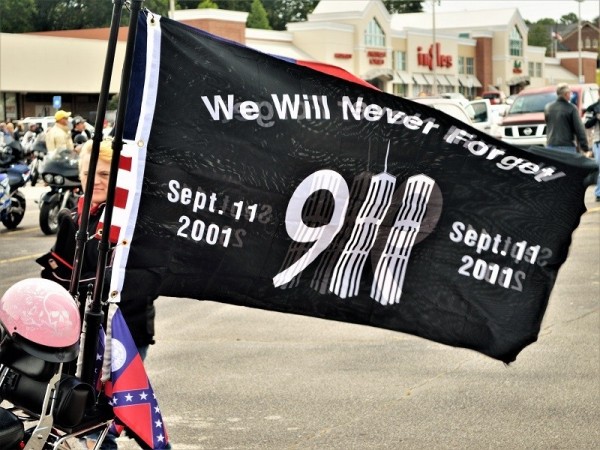 Ride to Remember to stretch across North Georgia Sunday
Motorists in Banks, Barrow, Clarke, Habersham, Jackson, Lumpkin, Union and White counties should build extra time into their Sunday drives as hundreds of patriotic motorcyclists make their way through the area for a 9/11 memorial ride.
By Rob Moore 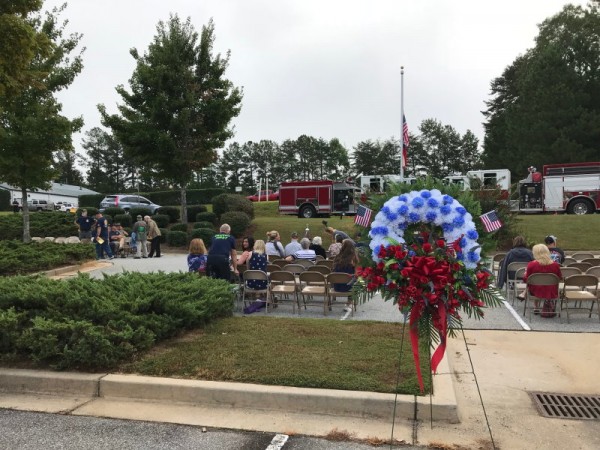 PHOTOS: Dawson County EMS honors lives lost on 9/11
Dawson County first responders honored those who lost their lives in the terrorist attacks on September 11, 2001 in a solemn ceremony Tuesday morning.
By Alyson Shields 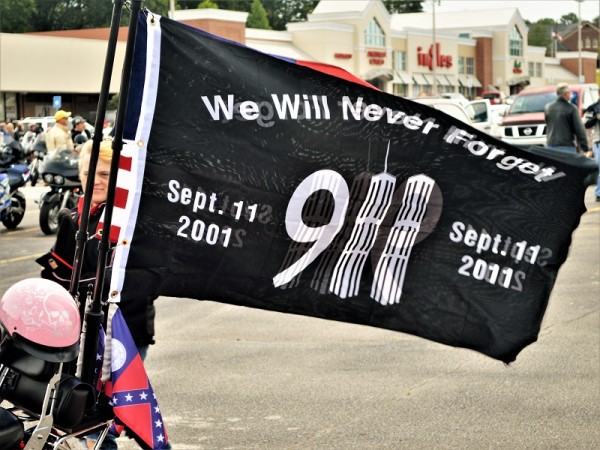 Nearly 1,500 motorcycles traverse North Georgia in ‘Ride to Remember’ 9/11
Sixteen years after the tragic events of 9/11 altered American history forever, residents from across North Georgia want everyone to know they haven’t forgotten the sacrifices made that day.
By Rob Moore 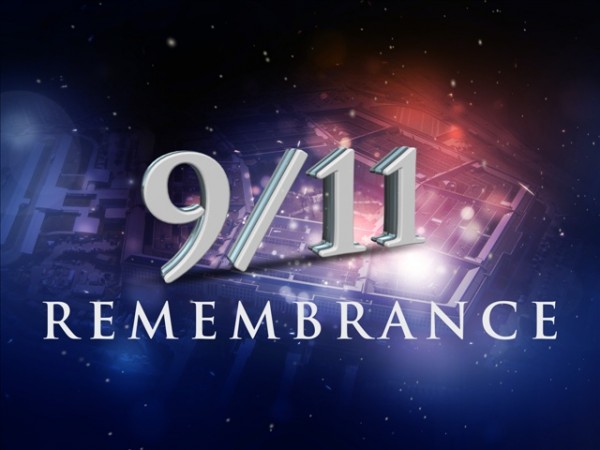