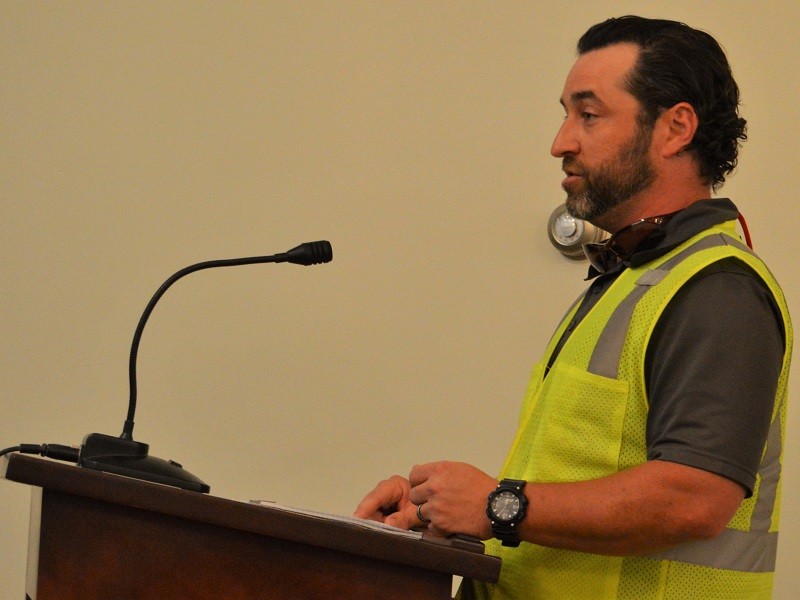 CLARKESVILLE – The City of Clarkesville has determined it lost approximately a quarter-million gallons of water per day in August due to a leak near city hall.

At Monday night’s Clarkesville City Council meeting, ESG Operations Inc. Project Manager Joseph Deputy provided information to the mayor and council about the leak and its impact on the city.

“The day before we repaired that water leak, we were at 788,000 gallons per day pumped out to the distribution system from the water plant,” Deputy said. “That equated to just over 13 hours of run time for somebody to be at the plant running the service pumps.”

Those numbers changed drastically after crews repaired the leak at the corner of Washington Street and Lewellyn Street across from Rocky Branch Road.

Deputy said he anticipates a significant cost savings now that the leak has been repaired.

While in the ground making repairs, crews also discovered a 1950s era shutoff valve that was in the closed position, meaning water from the elementary school tank didn’t make it past city hall.

Deputy told the mayor and council how the valve was discovered and the impact it has had on the city’s water distribution system for an unknown number of years.

“One of the big things is we had trouble in the past with the elementary tank and the turnover at the elementary tank,” Deputy said. “What I mean by turnover is there’s only so long that water inside the holding tank is good for, so we would have to do additional work to make sure that the water in that tank was turning over.”

Deputy said alleviating the issue of the closed valve already is showing signs of improving the city’s water distribution system.

“Now, we’re actually getting some turnover in the tank just because now we’re feeding down Washington Street, whereas before it was basically stopping at city hall and not going any further,” Deputy said.

Asked how long the valve issue has existed, Deputy said it appears to be a long-term problem.

“It was long before anybody who even works for the city now,” Deputy said.