Football Highlights: Johnson at Cherokee Bluff from AccessWDUN on Vimeo. 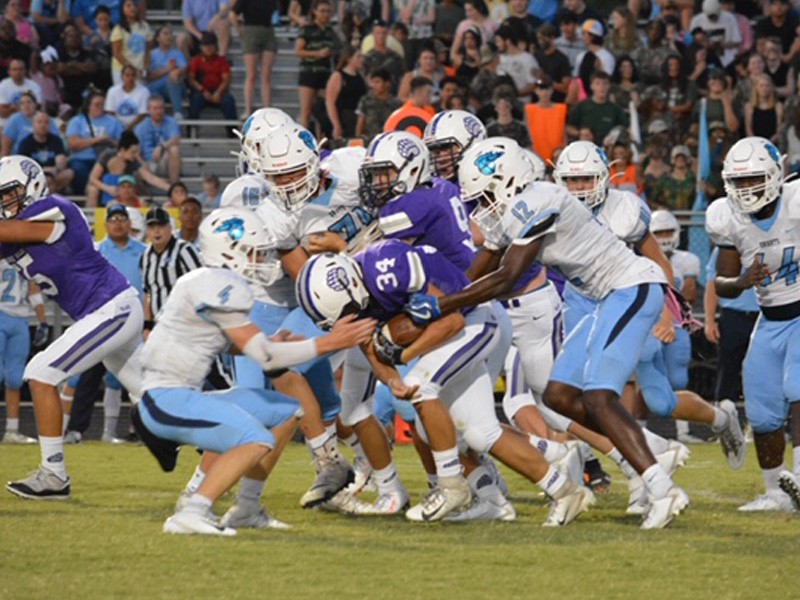 FLOWERY BRANCH — Just how epic the celebration will be is anybody’s guess.

But based on the emotional release on the field by the Cherokee Bluff football team and its fans, it figures to be a long, loud weekend along Spout Springs Road.

The Bears engineered a stunning 37-7 win over Johnson Friday night for the program’s first-ever win. Now comes the party that Bluff coach Tommy Jones said before the season began would be “epic.”

Can they execute it as well as they did Friday’s gameplan? They were off to a good start as purple fireworks lit up the night sky and Prince’s “Purple Rain” blared over the speakers as fans rushed the field.

“I don’t know how big it’s going to be but I just know that tonight was a big brick for us to put into the foundation,” said a Gatorade-soaked Jones. “This is a great community with great administrators and we have a great staff. It’s a big win for all of them.

“But it’s always exciting to get that first program win. Just a great feeling right now.”

The Bears did not look like a team in search of its first-ever win in the first quarter. They opened the game with an impressive 8-play, 83-yard drive, capped by a 6-yard touchdown run from Jayquan Smith.

The defense stopped the Knights on a quick three-and-out, and Smith struck again with a 46-yard sprint through and around the Johnson defense for a 14-0 Bluff lead just seven minutes into the game.

The Johnson offense, one week after chewing up the West Hall defense on the ground, could do little right from there. Jack Luttrell fumble two plays later with the Bears’ Sam Stribling recovering at the Knights’ 47. The Bears turned that into a Mason Thomas to Jacob Carlson 24-yard touchdown pass for a 21-0 lead with 30 seconds left in the first quarter.

On Johnson’s next play, Luttrell was stripped and the Bears’ Tino Mukono picked it up and raced 48-yards for a score and a 27-0 lead as the first quarter came to an end.

Thomas, who finished 7-of-8 for 172 yards and 2 TD passes, was all smiles as he emerged from the crush of fans near the 50-yard line.

“Just feels great to finally get this one. A great moment for all of us,” he said. “Our O-line was killing it upfront and they really got us going.”

But Thomas, who was a great complement to Smith, who finished with 129 yards rushing, said they aren’t satisfied to just break through the wins barrier.

“To me, I think is going to make us want to come in and work even harder. I think we’re ready to get this thing going,” he said.

The Knights tried to answer in the second quarter twice driving into Cherokee Bluff territory but both times were stopped on downs. Cherokee Bluff extended the lead to 34-0 when Thomas found Jaylon Justice on a 78-yard TD pass that saw the ball go through a Johnson defender’s hands before Justice corralled it and outraced the Johnson defense.

It got worse for the Knights as Luttrell and Xzavior Ramsey both were knocked out of the game on consecutive plays. Then late in the second quarter backup quarterback, Justin Long was picked off as the Bears took a 34-0 lead into halftime.

Luttrell eventually returned in the third quarter but Ramsey did not.

Johnson came out to start the third quarter the way it started last week against West Hall. Dayshun Summerour raced 20-yards for a score on a pitch left to cap the Knights’ opening 71-yard drive to cut the lead to 34-7.

But the Bears defense clamped down from there holding the Knights to just one first down the rest of the way.

“I thought our defense played very well,” Jones said. “But the key against a ball-control team like Johnson is getting a quick score. We got a couple and that really took them out of what they like to do.”

Cherokee Bluff added a 32-yard field goal from Mason Gill early in the fourth quarter and then turned things over the defense from there.

Johnson finished with just 193 total yards of offense, all rushing.