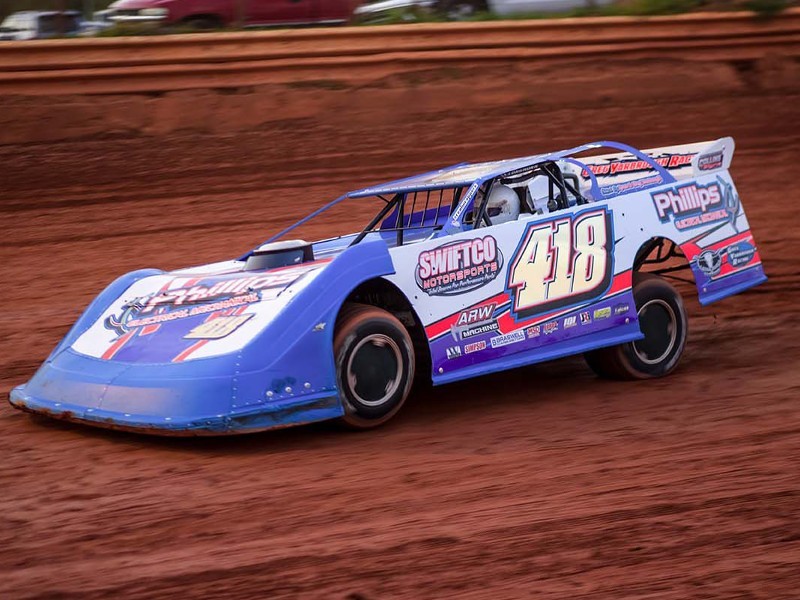 Grant Jordan was fast when it counted on Saturday night at Georgia’s Hartwell Speedway.

After qualifying second to Collins in time trials earlier in the evening, Jordan made the most of his outside pole starting spot. The Bowman, Georgia driver got the edge on Collins as the two raced into turn one on the opening lap, and grabbed the lead as the duo raced off turn two.

Collins would look to the inside time and again, but Jordan ran his car high, wide and handsome throughout the 25 lap feature en route to the victory.

Collins had to settle for second, with Chris Woods in third, Bryce Alewine in fourth and Chris Segars in fifth.

Chance Segars scored the victory in the Stock V8 feature, with Bradlee Jones in second, Hayden Collett in third, Jake Jordan in fourth and Keith Ross in fifth.

Tanner Nation was leading in the final laps of the Young Guns feature when he was held up by a lap car. When Nation dove to the inside of the slower car, Hoyt Partain went three wide to the outside in turn three. Partain came away with the lead and the win, leaving Nation to settle for second. Alden Fortson, Lane Fortson and Jayce Brown rounded out the top five.

Hartwell Speedway is back in action on Saturday, September 7. Visit Hartwell-Speedway.com for more information.