Blue Thunder and the ELO fan 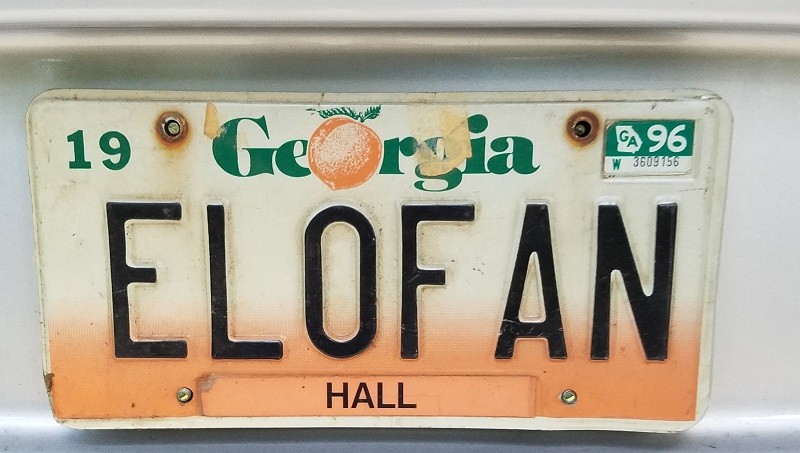 I saw a survey a few years back that said approximately 40% of people name their cars. Apparently, women have more of a tendency to do so than men. There’s no doubt we Americans have a true love and emotional attachment to our vehicles.

Growing up my family had two cars. When Dad was chasing bootleggers, we had the Gov’ment car (that’s how he pronounced it) and the Pontiac, which was my mom’s ride. After retirement, it was just mom’s car and dad’s car. Me, I had to be different.

Blue Thunder was my first car. It was a blue Pinto Squire with wood-grain sides, blacked-out windows, chrome wire wheels, and a wicked home-built sound system. You may have had a stereo with some incredible Kraco speakers, but Blue Thunder had horn tweeters up front with mid-range speakers in the doors. The back sported two handcrafted speaker cabinets that resembled the wedge-shaped monitors you sometimes see on stage. There was an eight-inch woofer and another horn tweeter in each one. The requisite amp and equalizer sporting a high LBL factor was tucked into the glove compartment. I didn’t own any gloves at the time, so it worked out. (LBL is tech talk for little blinking lights). For those movie buffs, the answer is, “yes” it was named after the helicopter from the movie of the same name. I never said I was original.

Blue Thunder was also a rolling tribute to my favorite band then and now: Electric Light Orchestra. The rear window had the ELO logo as part of the tinting. There was a custom tag featuring the logo on the front made for me by a friend and a prestige license plate on the back that read ELOFAN. Hmmm…. this may explain why I had a hard time finding girls who would go out with me.

I wasn’t the only one. My friend Jeff also named his first car. It was a green ’69 Firebird he called The Green Goblin, or just Goblin for short. Although he was also an ELO fan, his fandom didn’t extend to his vehicle and he certainly didn’t go to the same extremes to make his car cool. Being a ’69 Firebird, it was cool from the day it rolled off the assembly line.

Blue Thunder wasn’t the only ride that I named. There was a dusty yellow 1977 Delta 88 dubbed the Banana. It was a big car with a big motor, a back seat the size of a sofa and you could land a plane on the hood. I am certain they used "Delta" ini the name because you could land a Delta jet on the hood. I had the unpleasant experience of getting into a head-on collision that rendered the hood latch useless. Aside from the gapping hole in the fiberglass grill, that was all the damage it sustained. But it tore the front left wheel off the Toyota Land Cruiser I hit. Score one for Detroit.

I didn’t discover the latch was toast until I was headed home one afternoon on a windy day and the hood flew open. When I say open, I mean all the way, bent back and resting on the windshield leaving the driver blind to the road kind of open. Fortunately, I was able to pull into a parking lot and slam it shut only to have it pop open again the second I got back on the road. After that I had to secure the hood with bungie cords. Every time you drove it, the hood would bounce up and down a few inches. After a while, I couldn’t take it. It was like driving a Jack-in-the-Box. You know, the toy where you crank the handle, it plays a tune, and then the clown pops out of the box at the worst possible moment and causes you to have to change pants? I kept thinking my car was going to do the same thing.  Having been down that road twice, it was time for a change. Enter the Black Knight.

The Black Knight was a 1986 Volvo 760 turbo wagon with a five-speed stick. I got it during the 1996 Summer Olympics. The Black Knight was equally memorable but not because it had body panels that might suddenly fly open. On the contrary, mechanically it was a great car. The interior, however, left something to be desired.

The cloth on the headliner was separated and sagging in a few places over the back seat. Not a problem since only our two children ever rode with me and they didn’t much mind. What I didn’t count on was my son reaching up from his car seat to grab the liner. One moment I look through the rearview mirror see my son sitting there. Then the next time I check the traffic behind me, I see nothing but grey. What?! He had pulled the liner down placing a thin curtain between the front and back seats and an ugly roof overhead.

Eventually, the Black Knight was sold to my wife’s youngest brother. He did a little work to it and then resold it to a kid who had a band. It passed me on the expressway several years later loaded with amps and other band equipment. Rock on, Black Knight.

Although I’ve had several cars since the Black Knight, only two have be christened. There was the white Chrysler Town and Country minivan, a vehicle I wish I still had. The kids called it the Marshmallow. It sort of lived up to its name when it roasted itself. It caught fire one day on the way home from picking my daughter up from school.

Then there was Ginger. She was a Nissan Cube. I named her that because that was what they called the paint color. If you don’t remember the Cube, it was a square car that reminded my children of the cartoon character The Lil’ Toaster. No offense to anyone who still owns one. They are good cars. But you must admit, if you put a sunroof in one it would look just like a toaster with wheels. Just pop in a big slice of Texas bread, turn the heat all the way up and you’re talking high definition toast.

My current ride has no name other than “paid for.” And that’s the best name of all.