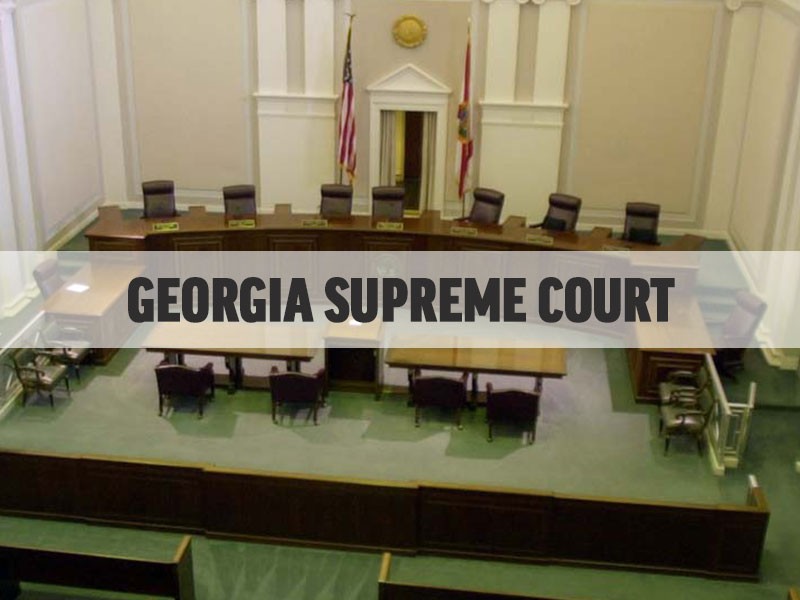 A man convicted in a 2016 murder during a botched drug deal in Gwinnett County has been granted a new trial.

The Supreme Court of Georgia, in a decision issued Monday morning, reversed the felony murder conviction of Sean Swanson, who had been declared guilty of shooting and killing Noel Reed during a marijuana sale.

Swanson claimed his trial attorney was ineffective in at least one part of his defense, and the justices agreed.

"Because we hold that counsel rendered constitutionally ineffective assistance in failing to seek a jury instruction on defense of habitation, Swanson’s conviction for felony murder is reversed,” Justice Sarah H. Warren wrote in a unanimous court ruling. "Consequently, Swanson is entitled to a new trial."

Swanson was one of five people arrested in the August 2016 incident, according to news reports. Swanson and co-defendant Tia Coleman were charged with murder in the case. Reed was shot and killed when he apparently tried to steal marijuana that Swanson was going to sell to him.

The content of the opinion written by Warren is written below:

“On August 19, 2016, Swanson’s close friend, Tia Coleman, received a call from an acquaintance asking if Coleman would sell marijuana to Noel Reed. Swanson and Coleman arranged a meeting to sell a half-pound of marijuana, plus an ounce, to Reed at an apartment complex in Gwinnett County.  Swanson drove his red car to the apartment complex; Coleman and three other friends were in the vehicle with him. Swanson parked his car to wait on Reed, who arrived shortly thereafter and approached Swanson’s car on foot. At some point during the encounter, Reed pulled out an Intratec 9-millimeter handgun (more commonly known as a TEC-9); Swanson then pulled out his own Sig Sauer 9-millimeter pistol and, from the driver’s seat, shot Reed twice, killing him.  Before driving out of the apartment complex, Swanson got out of his car and took back the bag of marijuana (which was lying on the ground) from near Reed’s body. Two residents of the apartment complex called 911 after they heard multiple gunshots and saw someone get out of a red car and take the bag that was lying next to Reed before driving away. Officers stopped Swanson’s car soon afterward and arrested him. From Swanson’s car, officers recovered a large bag of marijuana, a Sig-Sauer 9-millimeter pistol, and a .460 Smith & Wesson Magnum revolver.  From near Reed’s body, officers recovered a TEC-9 pistol, a backpack, and two 9-millimeter shell casings that matched the bullets in the pistol found in Swanson’s car.”

At his trial, Swanson testified in his own defense. According to Swanson, he was sitting in his car with his door open when Reed approached. Suddenly, one of his friends said, “yo, watch out, he has a gun,” and when Swanson looked up, Reed had a gun pointing at Swanson’s chest. Reed told Swanson to “run it, I need everything or I’m going to shoot someone,” then reached into the car and “snatched” the bag of marijuana while pointing the gun at Swanson. Swanson testified, “I was terrified,” and he also thought Reed might hurt the others in the car. Swanson said that Reed still had the gun pointed at him “wanting more stuff,” and when Reed “for a second, looked away toward the apartment area” and stepped back, Swanson began firing, hitting Reed twice at close range.

Following trial, the jury found Swanson guilty of sale of marijuana and felony murder predicated on that sale, and he was sentenced to life in prison. Swanson then appealed to the Georgia Supreme Court.

Although on appeal, Swanson did not challenge the legal sufficiency of the evidence against him, in today’s opinion, the Supreme Court concludes that the evidence at trial “was sufficient to authorize a rational jury to find Swanson guilty beyond a reasonable doubt for the crimes for which the jury found him guilty.”

However, Swanson argued that his trial attorney was ineffective for failing to request a jury charge on use of force in defense of habitation. In today’s opinion, “we agree.”

“To authorize a jury instruction, there need only be slight evidence at trial supporting the theory of the charge,” the 28-page opinion says. Under Georgia Code § 16-3-23, “a person is justified in threatening or using force against another when and to the extent that he or she reasonably believes that such threat or force is necessary to prevent or terminate such other’s unlawful entry into or attack upon a habitation.” The statute says that force intended to cause death or great bodily harm is justified if the entry is made in a “violent and tumultuous manner” and a person believes the entry is for the purpose of committing violence against any person in the habitation. Under Georgia law, the definition of “habitation” includes a “motor vehicle.”

The evidence presented at trial “constituted at least slight evidence that Swanson acted in defense of habitation,” the opinion says. “We can identify no reasonable basis for an attorney failing to request a jury instruction on defense of habitation under § 16-3-23 under these circumstances. Yet trial counsel failed to do so here, and even admitted at Swanson’s hearing on a motion for new trial that he did not request such a charge because at that time, he ‘did not know about’ the statute defining ‘habitation’ to mean a ‘motor vehicle’….”

“In sum, when viewed as a whole, the record here shows that there is a reasonable probability that, but for counsel’s deficient performance, the outcome of Swanson’s trial would have been different,” the opinion concludes. “In other words, Swanson has established a ‘probability sufficient to undermine confidence in the outcome’ in Swanson’s trial.”