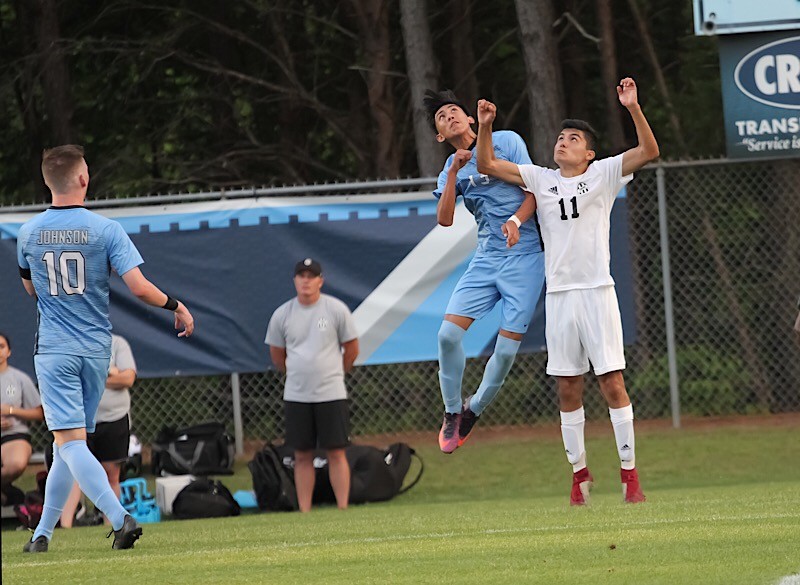 Johnson's Juan Carlos Gomez goes up for a header against Fayette County while teammate Cole Bowen (10) looks on. The defending Class 5A state champion Knights head to Fayetteville on Tuesday to take on Starr's Mill in the 2019 semifinals.
Photo/Asha Gill
Contact Editor

With just one week left in the 2018-19 prep sports season, seven area teams sit just one win, or one series win, from playing for state championships.

Six area soccer teams, led by defending Class 5A boys soccer state champion Johnson, will kick off around the state with just 80 minutes between them and a berth in their respective championship matches. All six matches -- four boys and two girls -- will be held on Tuesday.

The Knights will take on Region 3-5A champion Starr's Mill in Fayetteville. In Class 6A, the Gainesville boys will play host to Cambridge in a rematch of last year's semifinal showdown, a controversial Cambridge victory. In Class 4A, the No. 2-ranked Flowery Branch girls head to No. 1 Columbus in a monster showdown. In Class 3A, the Jefferson boys will travel to perennial power and two-time defending state champion Westminster while the Lady Dragons will travel to Lovett. In Class 2A, the Union County boys hit the long road to Vidalia.

Both Jefferson teams and the Union County boys are making their first-ever trips to the semifinals in soccer.

Meanwhile, one lone baseball team, North Hall, managed to navigate its way to the Final Four. The Trojans will face a familiar for in Pace Academy in Atlanta beginning on Tuesday with a doubleheader. It is a rematch of a 2017 first-round series that North Hall won on the way to its only state title.

The GHSA soccer championships will be held on Thursday through Saturday at McEachern High School and at Mercer's Five Star Stadium in Macon. They have yet to release which classifications will be playing at which venue. That is expected to be released following Tuesday's semifinals.

The GHSA sites and schedule for the baseball championships, scheduled for May 20 to May 23, was released on Monday. They will be held Monday through Thursday at five different venues around the state The Class 3A championship series will be begin on Tuesday at Luther Williams Field in Macon.

(Check below for the complete semifinal round schedule.)